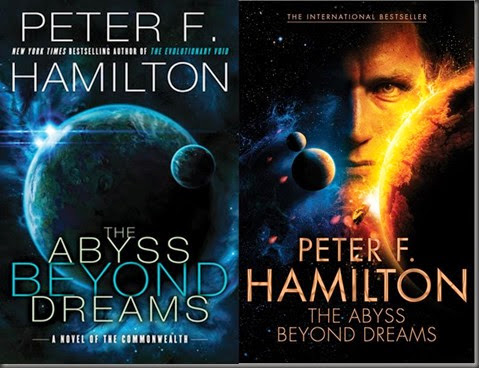 I haven’t read anything by Peter F. Hamilton, but I know a lot of people who love his work. This novel, as the start of a new series (the Commonwealth) looks really interesting, so I hope it will be the first of Hamilton’s books that I read. Here’s the synopsis:

When images of a lost civilisation are “dreamed” by a self-proclaimed prophet of the age, Nigel Sheldon, inventor of wormhole technology and creator of the Commonwealth society is suspicious. Especially as the dreams seem to be coming from the Void – an area of living space monitored and controlled because of its hugely destructive capabilities. With it being the greatest threat to the known universe, Nigel is determined to find out if human life really does exist beyond its boundaries and if so, what the hell they're doing there.

But when he crash lands on a planet beyond the Void he didn't even know existed he finds so much more than he imagined. Bienvenido, a world populated from the survivors of Commonwealth colony ships which disappeared over three thousand years ago. Since then they’ve been fighting an ever-increasingly desperate battle against a space-born predator invading their landscape. The Fallers looks innocuous to begin with and their lure is enticing to any that stray within their path – but they are by far the greatest threat to the continuance of humanity on this planet.

But Nigel soon realises that the Fallers also hold the key to something he’d never hoped to find – the destruction of the Void itself. If only he can survive long enough to work out how to use it…

Above are the US and UK covers. Not sure which I prefer, but the UK cover (left) certainly has a space operatic movie-poster feel to it. Which do you prefer?

Peter F. Hamilton’s The Abyss Beyond Dreams is published by Del Rey in the US and Tor/Macmillan in the UK. If you’re a reviewer with a NetGalley account, both publishers have it posted (US/UK). The novel is due to be published in October 2014.