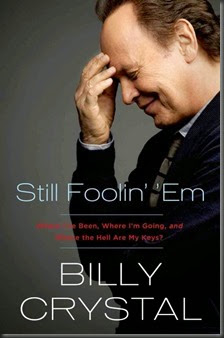 A really good audiobook by a great comic

Billy Crystal is 65, and he’s not happy about it. With his trademark wit and heart, he outlines the absurdities and challenges that come with growing old, from insomnia to memory loss to leaving dinners with half your meal on your shirt. In humorous chapters like “Buying the Plot” and “Nodding Off,” Crystal not only catalogues his physical gripes, but offers a road map to his 77 million fellow baby boomers who are arriving at this milestone age with him. He also looks back at the most powerful and memorable moments of his long and storied life, from entertaining his relatives as a kid in Long Beach, Long Island, and his years doing stand-up in the Village, up through his legendary stint at Saturday Night Live, When Harry Met Sally, and his long run as host of the Academy Awards.

Listeners get a front-row seat to his one-day career with the New York Yankees (he was the first player to ever “test positive for Maalox”), his love affair with Sophia Loren, and his enduring friendships with several of his idols, including Mickey Mantle and Muhammad Ali. He lends a light touch to more serious topics like religion (“the aging friends I know have turned to the Holy Trinity: Advil, bourbon, and Prozac”); grandparenting; and, of course, dentistry. As wise and poignant as they are funny, Crystal's reflections are an unforgettable look at an extraordinary life well lived.

I didn’t know this when I started Still Foolin’ ’Em, but this audio edition has won a number of awards (and was also nominated for a Grammy). Certainly, I can see why. This is a great audiobook, and I laughed out loud on a number of occasions. Crystal was a favourite in my household when I was growing up, so I was familiar with so many of the movies and moments Crystal mentions (his reminiscing about When Harry Met Sally is, of course, excellent and probably a stand-out).

I particularly liked that some chapters were performed and recorded live – this offered a nice change from the ‘normal’ format of just a reading from the book, and the added audience aspect of it brought to mind a live recording of a great stand up shows. If I had one quibble, it would be that some jokes and themes were rather drawn out and therefore lost impact. A minor issue, though.

All in all? I would definitely recommend this if you are a fan of the actor. Even if you are only somewhat familiar with his work, though, I think you’ll appreciate his humour and thoughts on growing older.