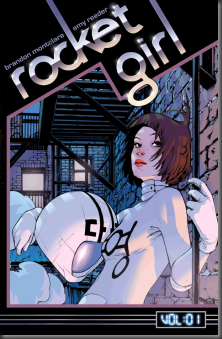 A teenage cop from a hightech future is sent back in time to 1986 New York City. Dayoung Johansson is investigating the Quintum Mechanics megacorporation for crimes against time. As she pieces together the clues, she discovers the “future” she calls home — an alternate reality version of 2014 — shouldn’t exist at all!

There is a lot to like about this series: it’s fun, quirky, action-packed, and contains some good light humour. And, of course, the artwork is great (Amy Reeder’s one of the best artists working today). The characters are interesting and varied, their interactions can be pretty fun. 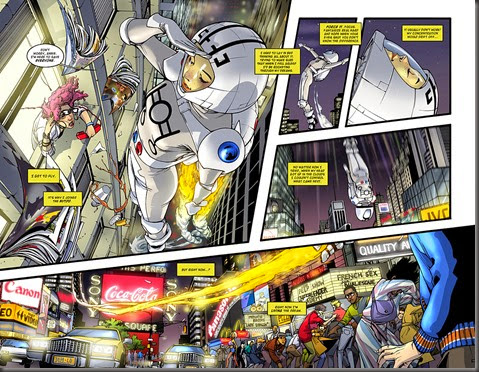 However, one thing that really niggled at me was the fact that cops in this future are teenagers. It’s probably completely unreasonable to be slightly annoyed by this, but there seems to be a real lack of attention to future-world-building. Sure, this is the first volume of an ongoing series, and therefore isn’t meant to present a complete story. It’s an origin tale, but one that lacks much depth. Part of the problem, I think, is that the creative team are trying to cram in a lot of information and action in a relatively short period of time.

I had really hoped for more from this series. It had huge potential, but sadly didn’t quite deliver. Despite this, I’m still interested in seeing where this goes in the future. The fish-out-of-water element of the future teen (and, uh, police officer) thrust back into the 1980s, and how she’ll adjust to the lower-tech, now-altered past could be really fun and interesting. Also, there are still some mysteries that have been seeded in the “future” parts that need illuminating.

A cautious recommendation, then. An imperfect beginning, but one that still has a good deal of promise for the future.

Posted by Civilian Reader at 8:51 PM