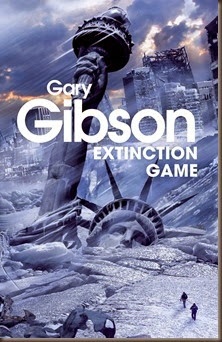 Jerry Beche should be dead. But instead of dying alone, he’s been rescued from a desolated earth where he was the last man alive. He’s then trained for the toughest conditions imaginable and placed with a crack team of specialists.  Each one also a survivor, as each one survived the violent ending of their own versions of earth. And their specialism – to retrieve weapons and data in missions to other dying worlds. But who is the shadowy organization that rescued them? How do they access other timelines and why do they need these instruments of death?

This is the first novel of Gary Gibson’s that I’ve read. I’d been meaning to try out his work for years, but for some reason always got distracted. Luckily, Extinction Game arrived in the mail, and I happily dove right in. I was not disappointed. This is a good novel.

The story focuses on a survivor from a ravaged earth, one in which the whole population (as far as he knows) has been wiped out by the evil machinations of a particular group. He’s picked up by a team of fellow survivors, “Pathfinders”, all from alternate universes and Earths – each of which has also been devastated by one of a great number of possible global catastrophes. Together, working for The Authority, they are sent to various other Earths to uncover technology, information, and anything else that might come in handy. In some ways, Extinction Game has given Gibson the opportunity to experiment and dabble with a wide variety of catastrophes and disasters. This means a pretty varied story and deadly/exciting altercations for his protagonists.

And they’re a varied bunch of protagonists, too. We get to know them slowly, as they keep plenty of secrets from Jerry, whose presence and rescue may not be as random as he is originally led to believe. I think I would have liked to get to know them a bit better – sometimes, I felt like they didn’t really jump off the page for me. Stuck together on a small base on Easter Island, we get to see their relationships, as well as their strained dynamics with the military contractors who are there to “keep them safe”. Not to mention the toll of being faced with multiple extinction-level events (before, during and after) on multiple Earths. That has got to take an emotional toll… It was interesting to read about the Authority, the Pathfinders and the dimension-hopping deployments from Jerry’s perspective, and to seem him start to questions what was actually going on.

Overall, this was an enjoyable novel, a quick read, and a good introduction to Gibson’s writing. While his writing is good throughout – clipped, sparse prose, never florid or over-done – there were times when it felt like he was veering a little too far into tell-not-show. These moments didn’t derail the story’s flow too much, though. Sometimes things moved a little too fast, too. I couldn’t help wondering if Extinction Game shouldn’t have been either longer, or part of a series (this is a stand-alone). It would make a really good movie, I think, if they were able to rustle up the funding… It’s a bit like Sliders, but far more apocalyptic.

Recommended for anyone who likes alternate-reality and disaster science fiction. The novel has also made me interested in checking out more of Gibson’s novels.