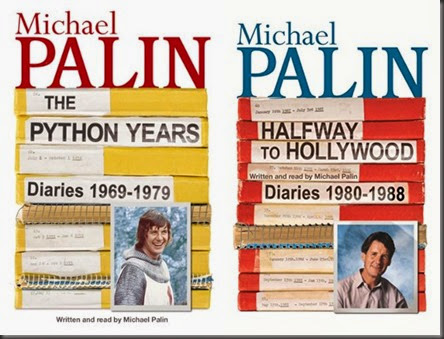 A fantastic pair of memoirs, covering some of the best of British comedy

Michael Palin has kept a diary since being newly married in the late 1960s, when he was beginning to make a name for himself as a TV scriptwriter (for David Frost, the Two Ronnies, etc). Monty Python was just around the corner. In this first volume of his diaries, he tells for the first time how Python emerged and triumphed. Perceptive and funny, it chronicles not only his struggle to find a niche in the world of television comedy, but also the extraordinary goings on of the many powerful personalities who coalesced to form the Monty Python team.

The second volume of Michael Palin’s diaries covers the 1980s, a decade in which the ties that bound the Pythons loosened as they forged their separate careers. After a live performance at the Hollywood Bowl, they made their last performance together in 1983, in the hugely successful Monty Python’s Meaning of Life…

Continuing my consumption of comedian memoirs, I turned to Michael Palin’s excellent Diaries. These first two volumes (I’m listening to the third at the moment), details much of Palin’s most famous work with the Pythons – as part of that group and also the projects that involved just one or two of them. They’re abridged, which sometimes made me wish for more. At the same time, though, they kept the story moving, and I was never bored (in fact, I blitzed through them in three days). If you’re looking for an excellent comedian/celebrity memoir, then I would absolutely recommend these two: The Python Years and Halfway to Hollywood.

Palin takes us through the Python movies, touching upon the different dynamics that evolved between the members of Britain’s best-known comedy group. Whether it was the wild years and antics of Graham Chapman (who seems rather self-destructive and reckless), the rather serious John Cleese, the savvy and fame-hungry Eric Idle, and the more sedate Terrys (Jones and Gilliam). Palin’s comments on Life of Brian and The Holy Grail will be of interest to anyone who enjoyed those movies, as will his thoughts on A Fish Called Wanda (one of my favourite movies). He talks of the highs and lows of his career; his joy at seeing his family grow and succeed around him; his respect for his fellow Pythons and frequent happiness for their individual successes (Fawlty Towers, for example).

He wrote much of the dialogue and acted in Terry Gilliam's Time Bandits and acted in his next film, Brazil. He co-produced, wrote and played the lead in The Missionary opposite Maggie Smith, who also appeared with him in A Private Function, written by Alan Bennett. For television he wrote East of Ipswich, inspired by his links with Suffolk.

The second book finishes around the time that Palin was starting the first of his hugely popular and successful travel programs for the BBC. (Sadly, I have yet to see these, but after hearing him talk about them, my interest has certainly grown.)

Overall, then, these two Diaries audiobooks are a delight to listen to: Palin comes across very much as his reputation would suggest: kind, calm, and frequently amusing. I thoroughly enjoyed these, and didn’t hesitate to pre-order the third volume. A must-read/-listen if you a fan of Monty Python, or any of Palin’s other great projects.