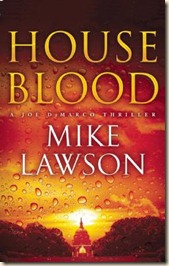 Orson Mulray, CEO of Mulray Pharma, a cold and calculating man obsessed with profit and prestige. Mulray believes he has discovered a drug that could prevent a previously incurable disease. It could be the salvation of millions of people and make him billions of dollars. But the drug needs to be tested on human subjects and Mulray needs more than blood samples – he needs autopsy results.

Lizzie Warwick, a naive philanthropist who provides relief to third-world victims of wars and natural disasters, is the ideal tool. But then her D.C. lobbyist uncovers the plan, so Mulray has him killed and frames his partner, Brian Kincaid, for the murder.

Two years later, DeMarco is asked to look into the seemingly hopeless case but he has other things on his mind: his powerful boss, John Mahoney, has been ousted from his position as Speaker of the House; his girlfriend has left him; and his friend Emma may be dying. DeMarco has no expectation of freeing Kincaid – and he certainly doesn’t expect to become the target of two of the most ruthless killers he and Emma have ever encountered.

House Blood, the seventh novel in the Joe DeMarco series, is another great thriller from Lawson. Filled with political and international intrigue, and populated by three-dimensional and engaging characters, it fulfilled and even exceeded my expectations. I thoroughly enjoyed reading this novel.

The first 39 pages of the novel lay out, in lightning-quick fashion, everything we need to know about Mulray’s plan – except the juicy part as to what type of drug they are actually trying to develop, and also what specifically about the plan is either illegal or unethical. I quite liked this approach – it lacks a certain art, perhaps, but it bulls us through the set-up so we’re fully prepared and caught up just under 10% into the novel. This meant the rest of the 400 pages were devoted to the story – specifically, the pharmaceutical company’s machinations and DeMarco’s investigation.

When DeMarco does enter the story, we learn that life in D.C. has changed quite a bit for him and his boss, Mahoney. For one thing, the latter is no longer Speaker of the House, even though he still acts like he owns the place. Mahoney’s wife has been bugging the Congressman about Kincaid’s case and plight. Therefore, DeMarco is given the task of appearing to investigate the problem as a means of making Mahoney’s life better, rather than in the cause of justice. But DeMarco, being who he is, gets reluctantly sucked into the case as he realised something is definitely off about Kincaid’s conviction. DeMarco’s snooping sets greater things in motion, and paints a target on his back... [As with many thrillers of this type, the antagonists often show their hand, as they get paranoid and overreact when “addressing the problem”.]

The characters are all really interesting and three-dimensional, and each of them develops as the story goes on (except for Mahoney, but he actually barely features, as is the norm). DeMarco and Emma (his former CIA agent friend) continue to be engaging characters, and great guides to Washington, D.C., the intelligence world and the scandals and less-acceptable side of Congressional life (scraping the barrel of political glad-handing and favours, in particular).

Even the bad-guys are not your typical, cookie-cutter villains. Mulray is an absolute asshole, true, but despite his ruthless ambitions, his drug (were it to be developed successfully), would actually help tens of millions of people. It’s an interesting idea, this – not only is it (as far as I’m aware) a solid, original take on the classic “greedy evil corporate overlord” thriller premise, but it offers a morally ambiguous goal, and Lawson writes this dilemma into the story very well. Fiona, Mulray’s “lawyer”, is a crazy, sociopathic bitch. There’s really no better way to describe her, as her answer to everything seems to be “Kill them”. She’s paranoid, fierce, and unrelenting (it is eventually explained how she came to be this way). Kelly and Nelson, two hired killers, share a very touching bond – if you ignore the fact that they’re assassins, they are absolutely devoted to each other, willing to sacrifice everything, and as the story progressed I found myself starting to feel sympathetic towards them. They’re all very well-drawn characters.

It’s really great reading a new Lawson novel. I’m so comfortable with the regular characters, now, that it never feels like they’ve been gone for long, and it’s always so easy to get back into their lives and stories. Given that I picked up The Inside Ring (book one) on a whim all those years ago, I have absolutely lucked out with the series. Each novel builds on the foundations of the previous ones, and Lawson has certainly become one of my favourite thriller writers.

There were a few moments that felt ever-so-slightly like info-dumps, but because of Lawson’s quick and fluid prose, this never felt like a problem. I found myself zipping through the pages nicely, despite the lack of action – this is more about dogged investigation than James Bond-ian action and adventure. There is a spot of international travel (to Peru, actually, which I rather liked – as well as some in Africa), and there are a couple of shoot-outs and assassinations, but for the main this is more of a thriller-drama than an action-thriller.

The novel has a rather bittersweet ending. But, it is one that ties up all the threads nicely (if not always prettily). There are some nice, pointed comments at the end about predatory HMOs and some of the ironies of the American medical/healthcare system, its failings and shortfalls – but it’s not preachy. It’s just a human tale of how every system can fail in the most infuriating, counter-intuitive and depressing ways. In fact, I think Lawson’s avoidance of specifically identifying with any “side” in any of the political debates herein stands the novel in good stead. This novel is all about the story, and it was a very good one.

This novel is thoroughly engaging and entertaining, with some nice red herrings and switch-ups thrown in for good measure. House Blood does exactly what we want a thriller to do, and more. This is an excellent addition to the series.

Posted by Civilian Reader at 6:13 AM