A new crime imprint coming from Prometheus Books, who also brought us Pyr! Also, Seventh Street Books has announced their inaugural line of fiction. I’ve been really impressed by Pyr’s novels (I have a slew of reviews coming up for them, so watch this space!), so I’ll certainly be interested to see what Prometheus’s crime imprint comes up with.

Continue reading for information on their first nine releases. Hopefully I’ll be able to feature more about them on the site closer to release date, and I’ll try to get some interviews with at least a couple of the authors. 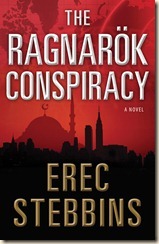 The world’s most dangerous terrorist organization may well be located in our own backyard.

An American bin Laden. An FBI agent. Connected by a terrible loss on 9/11, they now confront each other over acts of vengeance so horrific, the world is brought to the brink of war.

As Muslims around the world are being targeted in a series of devastating attacks, agent John Savas is drawn into a web of international intrigue. He must put aside his personal pain and work with a man who symbolizes all he has come to hate. Both are drawn into a race against time to prevent a plot so terrible that it could shatter civilization itself.

In a thriller that spans the globe in an ever-widening arc of intrigue, violence, and personal conflict, the stability of the world hangs in the balance. Only by transcending his own devastating loss can Savas hope to prevent the ultimate calamity unleashed by the Ragnorök conspiracy. 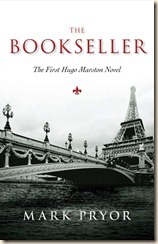 The Bookseller by Mark Pryor (October 2012)

Max – an elderly Paris bookstall owner – is abducted at gunpoint. His friend, Hugo Marston, head of security at the US embassy, looks on helplessly, powerless to do anything to stop the kidnapper.

Marston launches a search, enlisting the help of semiretired CIA agent Tom Green. Their investigation reveals that Max was a Holocaust survivor and later became a Nazi hunter. Is his disappearance somehow tied to his grim history, or even to the mysterious old books he sold?

On the streets of Paris, tensions are rising as rival drug gangs engage in violent turf wars. Before long, other booksellers start to disappear, their bodies found floating in the Seine. Though the police are not interested in his opinion, Marston is convinced the hostilities have something to do with the murders of these bouquinistes.

Then he himself becomes a target of the unknown assassins.

With Tom by his side, Marston finally puts the pieces of the puzzle together, connecting the past with the present and leading the two men, quite literally, to the enemy’s lair.

Just as the killer intended. 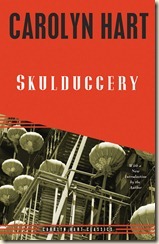 Beijing, 1941: The ancient bones of the famed “Peking Man” are placed in two wooden crates for shipment to the United States to escape the invading Japanese army. The bones are never seen again.

New York City, 1970s: a mysterious woman offers to sell the bones to an unknown man on top of the Empire State Building. But when someone takes a photograph, she makes a hasty retreat and disappears forever.

San Francisco, 1980s: The greatest treasure in the history of paleontology remains missing – until a frantic stranger named Jimmy calls on noted anthropologist

Ellen Christie and shares a scintillating secret with her: he has evidence of the bones in his backpack. She becomes convinced that he is right. But when she visits his Chinatown home, Jimmy must flee with the evidence, as a couple of thugs are also after the treasure.

As Ellen and Jimmy’s brother, Dan, navigate the treachery of the city’s elite criminals, her dreams of academic stardom draw closer. Unfortunately, so does danger.

Can Ellen really trust Jimmy? And if she can’t, will her own ambition and her growing attraction to Dan lead her astray? Ellen will soon discover that the real world is greyer than the black-and-white lines of science, and the blurrier the lines, the more fun they are to cross!

This is the first of two new novels from Carolyn Hart (see below). 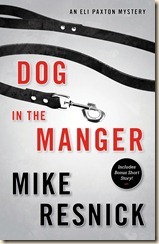 Dog in the Manger by Mike Resnick (November 2012)

Hired to investigate the disappearance of a Westminster winner, Eli Paxton stumbles into a web of intrigue.

A dog is missing. Not just any dog. The number one Weimaraner in the country and current Westminster winner.

Down-on-his-luck private eye Eli Paxton is hired to find him. Not exactly an elite assignment, but better than nothing. Maybe it will help him pay his rent.

It turns out to be anything but a routine case. People start dying in mysterious ways, a cargo plane goes missing, and someone is taking shots at him. It makes no sense. Even a top show dog isn't worth that much.

Now the hunt is on. Paxton needs to find this dog to save his own skin. The trail leads to Arizona, then Mexico, and finally back to his hometown of Cincinnati… Where he finds the startling solution. 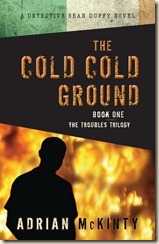 A Catholic cop tracks a killer operating amidst the sectarian violence of the conflict in Northern Ireland.

Spring 1981. Northern Ireland. Belfast on the verge of outright civil war. The Thatcher government has flooded the area with soldiers but nightly there are riots, bombings, and sectarian attacks.

In the midst of the chaos, Sean Duffy, a young, witty, Catholic detective in the almost entirely Protestant Royal Ulster Constabulary, is trying to track down a serial killer who is targeting gay men. As a Catholic policeman, Duffy is suspected by both sides and there are layers of complications. For one thing, homosexuality is illegal in Northern Ireland in 1981. Then he discovers that one of the victims was involved in the IRA, but was last seen discussing business with someone from the Protestant UVF (Ulster Volunteer Force).

Fast-paced, evocative, and brutal, The Cold Cold Ground is a brilliant depiction of Belfast at the height of the Troubles and a cop caught in the cross fire. 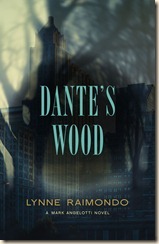 A troubled psychiatrist turns investigator when a young patient confesses to murder.

Psychiatrist Mark Angelotti knows that genes don't lie. Or do they?

Back at work after a devastating illness, Mark believes he has put his past behind him when he is asked to examine Charlie Dickerson, a mentally handicapped teenager whose wealthy mother insists he is a victim of sexual abuse. Mark diagnoses a different reason for Charlie’s ills, but his prescription turns deadly when a teacher is murdered and Charlie confesses to the police.

Volunteering to testify on Charlie's behalf, Mark’s worst fears are realized when paternity tests show the victim was pregnant with Charlie’s child. Now it’s up to Mark to prove Charlie’s innocence in a case where nothing is as first meets the eye.

Not even genes – Mark’s or Charlie’s – can be trusted to shine a light on the truth. 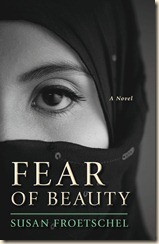 An Afghan woman defies her husband and societal pressures to investigate the death of her son.

The battered body of an Afghan boy is found at the base of a cliff outside a remote village in Helmand Province, Afghanistan. Did he fall as most of the villagers think? Or is this the work of American soldiers, as others want to believe? Not far from the village, the US Army has set up a training outpost.

Sofi, the boy’s illiterate young mother, is desperate to find the truth about her son’s death. But extremists move in and offer to roust the “infidels” from the region, adding new pressures and restrictions for the small village and its women.

We hear two sides of this story. One is Sofi’s. The other is that of US Army Special Ranger Joey Pearson, who is in this faraway place to escape a rough childhood and rigidly fundamentalist parents.

In time, and defying all odds, Sofi secretly learns to read – with the help of Mita Samuelson, an American aid worker. Through reading, the Afghan woman develops her own interpretation of how to live the good life while discovering the identity of her son’s murderer and the extremists’ real purpose in her village.

As they search for answers, Sofi, Joey, and Mita come to the same realization: in each of their separate cultures the urge to preserve a way of life can lead to a fundamentalism that destroys a society’s basic values. 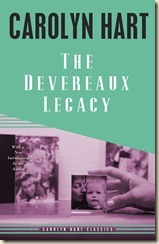 Leah Devereaux is a dead woman. At least, that’s what the folks now running the Devereaux plantation tell her: Leah has been presumed dead for nineteen years – since the day that both her parents died.

Leah, very much alive, has returned to South Carolina to uncover the untold story of her parents’ deaths. While some, like her cousin Merrick, welcome her, Cissy and John Edward tell her to stay away, tell her to stop meddling in secrets long kept.

When a ghost known only as the Whispering Lady appears once again at the Devereaux plantation after years of absence, the locals know it’s an omen of death. Merrick and Leah may be the next targets... 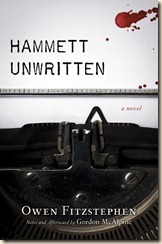 Dashiell Hammett searches for the meaning behind the falcon statuette that haunts him in later life.

A worthless bird statuette – the focus of Dashiell Hammett’s The Maltese Falcon. And much more.

As Dashiell Hammett closes his final case as a private eye, the details of which will later inspire his most famous book, he acquires at a police auction the bogus object of that case, an obsidian falcon statuette. He casually sets the memento on his desk, where for a decade it bears witness to his literary rise. Until he gives it away.

Now, suffering writer’s block, the famous author begins to wonder about rumors of the falcon's “metaphysical qualities,” which link it to a powerful, wish-fulfilling black stone cited in legends from around the world. He can’t deny that when he possessed the statuette he wrote one acclaimed book after another, and that without it his fortunes have changed. As his block stretches from months to years, he becomes entangled again with the scam artists from the old case, each still fascinated by the “real” black bird and its alleged talismanic power.

A dangerous maze of events takes Hammett from 1930s San Francisco to the glamorous Hollywood of the 1940s, a federal penitentiary at the time of the McCarthy hearings, and finally to a fateful meeting on New Year’s Eve, 1959, at a Long Island estate. There the dying Hammett confronts a woman from his past who proves to be his most formidable rival.

And his last hope.

All in all, a pretty interesting line-up. The first three on the list – The Ragnarök Conspiracy, The Bookseller, and Skulduggery – are of particular interest, and I hope to be able to bring you more news, reviews and so forth in the near future.

Posted by Civilian Reader at 10:00 PM