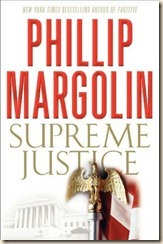 Intrigue & Corruption at the Supreme Court

Sarah Woodruff, on death row in Oregon for murdering her lover, John Finley, has appealed her case to the Supreme Court just when a prominent justice resigns, leaving a vacancy.

Then, for no apparent reason, another justice is mysteriously attacked. Dana Cutler – one of the heroes from Margolin’s bestselling Executive Privilege – is quietly called in to investigate. She looks for links between the Woodruff appeal and the ominous incidents in the justices' chambers, which eventually lead her to a shoot-out that took place years ago on a small freighter docked upriver in Shelby, Oregon, containing a dead crew and illegal drugs. The only survivor on board? John Finley.

With the help of Brad Miller and Keith Evans, Dana uncovers a plot by a rogue element in the American intelligence community involving the president's nominee to the Supreme Court, and soon the trio is thrown back into the grips of a deadly, executive danger.

This is the second novel in Margolin’s Washington Trilogy (the first was Executive Privilege), and it continues the series in very fine form. The novel reunites us with Brad Miller and Dana Cutler – the former is now a clerk at the Supreme Court, while Dana continues to work as a private investigator and also some-time reporter for Exposed, the supermarket tabloid our protagonists turned to in their previous novel. Supreme Justice has a couple of great twists and red herrings, as well as political and courtroom intrigue. This is a pretty solid, entertaining and gripping political/legal thriller.

The novel opens with a shooting on a boat, which is docked in Oregon. A couple of local cops are called in to investigate, and discover that the ship is stocked with tons of hashish. Then something strange happens, when a group of “government officials” with a lot of guns come along and commandeer the crime-scene, before making the ship and the dead bodies disappear.

Then the story jumps forward four years, and we catch up with Brad Miller. Brad’s life at the Supreme Court seems to be going swimmingly. There’s a good amount of detail (which is great, as I’m pretty fascinated by the SCOTUS), but it never borders on info-dumping or over-doing it. Margolin does a really great job of making us feel informed and comfortable with the legalese and the terminology of the Court. There’s a growing tension between the Justices, especially regarding the Woodruff case, which sets off some alarms for Brad’s employer, Justice Moss. Margolin also does a great job of showing readers the jockeying for position and information between the clerks, and the office politics, rivalries, intrigues.

The attempt on Moss's life was... Problematic. I can't imagine a ski-masked, armed man would have been able to get into the underground parking garage...

It takes 100 pages before we start to really learn anything about the case in question – that’s the first third of the book. I’m surprised by this choice, actually, as most thriller authors would have set up some of the details at the start, to give readers some idea of what they were supposed to be caring about. To begin with, without the synopsis, the shooting on the boat would appear random and unconnected (they are connected, and Margolin does a good job of tying things up). I definitely found myself wondering what all the fuss was about to begin with, but I also didn’t much care that I didn’t know – I was really enjoying the groundwork, and Margolin’s characters are always interesting.

The story builds momentum nicely, as Margolin ties up some of the seemingly random threads – there were some surprises, a couple of very nicely-placed red herring, and a very satisfying ending (one that I had not expected). To go into any more detail would throw out too many spoilers, but needless to say, I really enjoyed this and thought it worked really well.

There are fewer shoot-outs than there were in Executive Privilege, but I didn’t mind this at all. There are a couple of action moments, very nicely done and not at all over-the-top.

As with Executive Privilege, this is a well-written, engaging political-legal thriller. The author writes tight, fluid prose, and the dialogue is always realistic. I’m very happy I took a chance on Margolin’s series – he’s one of the best new-finds for me, and I’ll definitely be reading Capital Crimes in the near future, as well as checking out some of his earlier novels.

Highly recommended to anyone who likes their thrillers with a legal and political emphasis to proceedings.

UK readers: Margolin’s Washington Trilogy is available as Kindling (for some reason, searching for his novels on Amazon UK has always been a bit buggy): Executive Privilege, Supreme Justice, Capital Murder