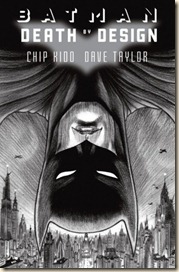 Gotham City is undergoing one of the most expansive construction booms in its history. The most prestigious architects from across the globe have buildings in various phases of completion all over town. As chairman of the Gotham Landmarks Commission, Bruce Wayne has been a key part of this boom, which signals a golden age of architectural ingenuity for the city. And then, the explosions begin.All manner of design-related malfunctions – faulty crane calculations, sturdy materials suddenly collapsing, software glitches, walkways giving way and more – cause casualties across the city. This bizarre string of seemingly random catastrophes threatens to bring down the whole construction industry. Fingers are pointed as Batman must somehow solve the problem and find whoever is behind it all.

Before picking this up, I had only seen one preview page, and I was really intrigued by the style and story – it looked gloomy and atmospheric, which are two things I’ve always associated with Batman. As it turns out, my initial impressions wer right on the money, and I’m really glad I bought this – this is a great detective/investigative story, rendered in some truly wonderful artwork. Very impressive.

The predominant strength of this graphic novel is its great artwork – it’s fantastic, and the style is, for me at least, a new one for comics. It’s rendered very much as one would expect from an architect – the blue-pencil underlines, overlaid by charcoal and graphite, with the occasional smattering of colour, make this a really beautiful graphic novel. 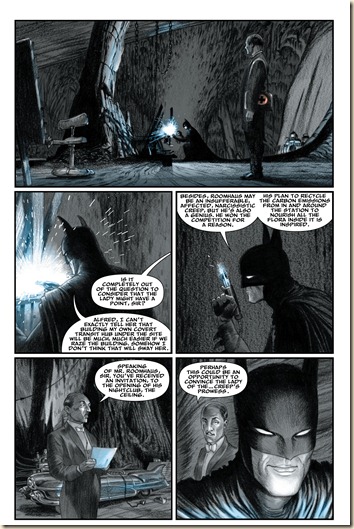 The story’s a little thinner than some other Batman stories, but it’s still pretty good, and is influenced by the incident in which cranes collapsed in NYC (2008) and also the destruction of Pennsylvania Station 1963 – in this story, cranes are being destroyed by corrupt union forces, and Bruce Wayne and the city of Gotham have decided it’s time to demolish and replace the old Wayne Central Gotham Station (built by Bruce’s father). The architect chosen to redesign the station is an arrogant loon.

The colour palette is really effective and atmospheric – predominantly black and white, with the occasional remaining blue lines showing through, some reds, yellows and occasional splash of green and purple. 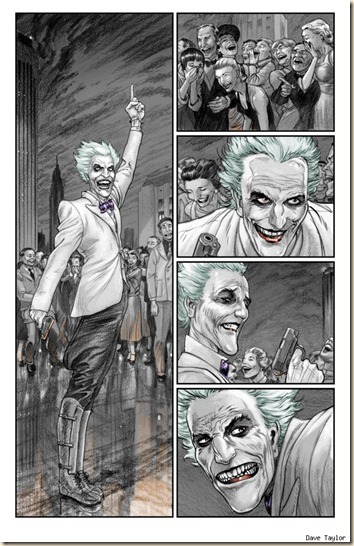 There’s a bit of a steampunk-vibe to the aesthetic (mainly evident in some of the gizmos), but with some 21st technology thrown in, as well as some even more advanced tech (come on, it’s Batman! Of course he has the coolest toys). Cars and buildings have an early 1900s style – as does Batman, who is far closer to the classic design than the modern, armoured Batman we know from Christopher Nolan’s movies or Scott Snyder et al’s current New 52 crop of Batman titles.

Overall, this is a great graphic novel. The story is good and atmospheric; the investigation builds to a good, satisfying climax; and the story as a whole ends on a hopeful note.