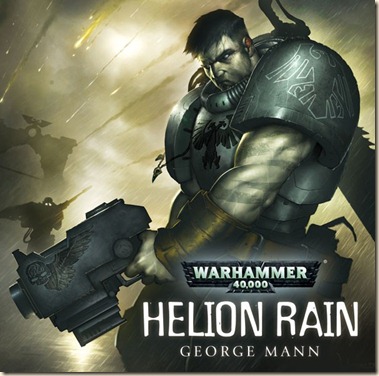 The world of Idos is on the verge of destruction, wracked by catastrophic storms and plagued by ravening tyranids. Into this maelstrom come the Raven Guard 4th Company, the warzone perfectly suited to their lightning-strike methods of combat.

Led by Veteran Sergeant Grayvus, their mission is simple – to rescue the planet’s last survivors. But in the midst of this nightmare, they receive new orders to locate and destroy a power station. The station is built upon a fault line, and the resulting quake would swallow thousands of tyranids and turn the war in the Imperium’s favour. Grayvus and his company must fight their way through genestealers, acid spore mines and a deadly biomorph if they are to succeed and reclaim Idos for the Imperium.

Just a really quick review. I thought this was a pretty good audio-book. I enjoyed it, certainly, but I don’t know why I don’t rate it as highly as some others do. It’s not that it’s bad, by any stretch of the imagination – the story itself is pretty good. It just didn’t stick with me as much as some of the others have.

The story is packed with intense, brutal, and detailed warfare between the Raven Guard and the ravening hordes of Tyranids. I liked that Grayvus strategizes about how best to take out a lictor (at the beginning), and plenty of other beasties, giving this story a little more than just hack-and-slash, bolter-filled battles.

I would have preferred a little more character-building and character-development. While there was plenty of detail on how the Raven Guard prosecute a war, and a couple of their idiosyncratic customs, there were moments when I felt I hadn’t really got to know the characters themselves particularly well, or as well as I have in other audio-dramas from Black Library. Perhaps some battles were a tad over-described, as well.

The story is well performed, though – far less melodramatic, and with calmer expressions than in some other performances. On that score, it’s much better than the earlier offerings from Black Library.

So, in sum, Helion Rain is sure to please fans of Space Marine stories, who are after a short, action-packed fix. But, it is not quite as good as some of the other audio-dramas the publisher has released.

Posted by Civilian Reader at 4:20 AM