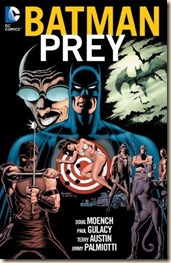 Batman must confront the sinister Dr. Hugo Strange, a man with a deadly secret who is determined to kill the Dark Knight. Who is the fearsome Night Scourge, and what is his link to the GCPD? And how does Catwoman fit into all this?

Collecting two storylines from Batman’s early years, this is a pretty good introduction to the character and his relationships with not-yet-Commissioner Gordon and also Catwoman. There are two distinct art-styles used, as the two stories within were first published quite far apart (they were first published as Legends of the Dark Knight #11-15 and #137-141). It’s a very good collection, not to mention substantial in length, and I enjoyed both halves.

At the start of this book, we are told that there have only been 19 “alleged sightings of the Batman”, so we know immediately that this is very early in Batman’s career. This fact really appealed to me because, outside of the movies, the Batman comics and graphic novels I’ve read have all been set well into his “career”. This book therefore offered a very nice look at the early years of the hero – he’s still trying to figure everything out – when to best operate (the night is very important, as a dude in a weird suit doesn’t exactly strike fear in broad daylight), and how to build and perfect the Batmobile (he’s sick of schlepping everywhere on foot, for one thing). He often seems over-occupied with how Batman should work, rather than being focused on the job at hand. He is distracted, and lacks the confidence of other Batman stories. This was a refreshing version of Batman to read about.

Detective Gordon features heavily in the story, as he tries to find a way to help and support Batman, who's getting results where the Gotham PD aren’t, while also not betraying his own profession. Gordon’s number two, however, is ultra-driven to bring down Batman, believing he’s making the cops look bad and that it’s a personal insult. This leads him open to manipulation by others, as we discover early on in the story… Gordon’s motivation is hinted at – Batman seems to have saved his wife and kids – but because of my ignorance of previous story, I can’t offer more detail than that.

My main issue with part one was that the letterer (John Costanza) did a strange job for Batman’s internal monologue – it’s written in cursive, which is usually fine, but in this instance it isn’t always entirely clear (I’d be willing to accept that this is just down to minor differences in English and American cursive, but it did trip me up on occasion, which is unusual for me, and therefore why I point it out).

In Part 2, Batman is still coming to terms with his chosen role as the Batman. He is “still inventing” himself, “finding what works and what doesn’t, a process that may never end.” At the start of this story, his experimentation with new technology, tools and technology is the focus, as he involves himself in an illegal arms deal: “Got to be careful with all the gadgets and gizmos – curb the impulse to go overboard.” After making this observation, he assesses the strengths and weaknesses of using a flamethrower (“effective, but extreme”). As with many of my favourite Batman-related stories, I enjoyed seeing Bruce Wayne getting used to his alter-ego and life as a vigilante.

I much prefer the artwork in part two, from "Legends of the Dark Knight". It's set maybe a few years after part one, and Hugo Strange is back, and he's twisting an Arkham Asylum inmate to his will.

Catwoman has a rather interesting place in the overall story. In the first arc, she doesn’t really play much of a part at all, except as a peripheral character and another distraction for Batman to deal with. We do see the beginnings of their mutual attraction, though, and she plays a much larger role in the second storyline. In both stories, but especially the second, Catwoman is rendered much more muscular, which I thought more realistic given her general activeness – she is, however, is improbably and impractically breasted, and anyone familiar with the jokes about Scarlet Johansen’s Avengers poses will be familiar with some of Catwoman’s here.

The two parts have very different art-styles. That of the earlier story does look rather dated, now, but it is still pretty clear and evocative – the colours are less nuanced, relying more on solid colours. In the second part, though, the artwork is much better, with sharper, cleaner images, more nuanced and varied colouring.

The whole book takes a look at the psychology of “the Batman”, as Dr Hugo Strange attempts to figure him out. But, being a fruitcake himself, Strange probably goes about it entirely the wrong way. Another villain is central to the second part, but I won’t spoil things.

While I did preferred the second part of the book, the first story is still necessary to getting the full story, as well as satisfying. It is not without its strengths – it’s a good story, and Moench does a great job of showing us Dr Strange’s rapid mental decline and instability – but it also does feel just a little dated, given how far the franchise has come since then. The second story builds on Batman’s experiences with Strange, and the twisted obsession they develop for each other (Strange’s is really twisted, Batman’s is more professional).

Overall, this is a very good book, and one I would certainly recommend to anyone who wants to read more of Batman’s earlier years, when he was still developing the persona and legend of Batman. I’m really going to have to check out Batman: Year One at some point…

Posted by Civilian Reader at 1:39 AM