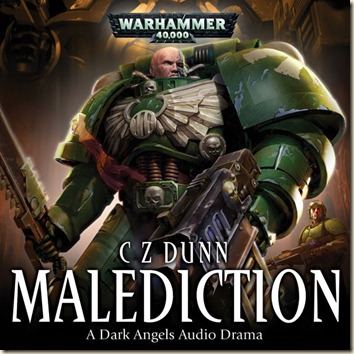 On the world of Amadis, veteran Imperial Guard officer Regan Antigone is being honoured for his role in the planet’s liberation from the forces of Chaos, some twenty-five years earlier. But when his old comrade, Master Tigrane of the Dark Angels Space Marine Chapter, arrives to join the festivities and asks to hear the glorious tale told once more, Antigone falters. With the details of his account cast under close scrutiny and with the judgement of the Imperium hanging over him, will his noble reputation remain intact?

In this story, we get a slightly different take on the Imperial never-ending war against the Archenemy. As the story begins, Antigone (performed with an Irish accent, which I rather liked), is suffering through a post-campaign ceremony – he is sickened by the propaganda spouted by the MCs, uncomfortable with the exaggeration of his feats of arms and heroism.

A Dark Angel Captain joins, and publicly toasts and salutes Antigone, and they fall into recollection and war stories. They’ve met before, the Dark Angel had saved Antigone’s life along with a couple of his other comrades. We’re transported back to the battlefront, as a squad of less-than-zealous Guardsmen try to survive in the mud and grinding horror of the battlefront.

But, is Antigone telling the truth? And who is the mysterious, hooded Astartes warrior (acted just a tad melodramatically), who initially comes to their aid? The Dark Angels officer at the dinner grills the hero, attempting to get to the truth. But what are the consequences for keeping or breaking a battlefield oath, and the secret he’s harboured since that fateful day?

Overall, this is a very good audio-drama. I loved the lack of melodrama, the calm and steady narrative and performances. Malediction also benefits from multiple actors working on it, bringing some nice variation of voices and accents. I particularly liked the original type of story that Dunn’s written (I won’t spoil the ending, but it’s not at all what I was expecting, while totally in keeping with the Warhammer 40,000 setting and Imperial mores, customs and penal code).  The story, especially the tragic end, the overall atmosphere and mood, are excellent.

Easily among the best of Black Library’s short audio-dramas.

Posted by Civilian Reader at 3:18 AM