Bit of a mixed bag, this week. Also rather delayed – sorry about that, but I was moving and packing up all my stuff in NYC, so things got a little delayed and pushed back. This week’s there’s a massive (though predictable) disappointment, but also a couple of interesting and well-done comics. Also, one of my favourite series comes to an end. 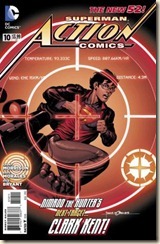 This does not continue the story from the previous issue very well (except for the final-page hints)... Morrison appears to have ADHD, when it comes to stories. First, we join Nimrod the Hunter (awful name, FYI), who has travelled to the former-Kent Farm to find out more about Clark. Then we switch to Clark, who has reported on a story about a child abuser or something. Clark then approaches the man for a comment, doesn’t get one, so attacks him as the Superman of the first few issues – i.e., without the suit he found when on Brainiac’s ship recently in the series. Is this a flashback? That’s entirely unclear. Then, we move to Superman as we know him (blue suit, red cape, etc.), and he’s meeting with the Justice League.

I like the banter between the Justice League, as it’s quite fun and there are plenty of throw-away comments and asides. They’re still getting used to each other. Superman is having thoughts of expanding what they do, going elsewhere to help solve big world problems – Batman demures, saying,

“I don’t want to be part of a gang of authoritarian living weapons from America. I won’t march into countries uninvited to ‘fix’ problems we barely understand.”

A nicely considered comment, and the single good moment in the issue’s main story. Yes, I’m that unimpressed with this.

Overall, this is a thoroughly muddled comic. I have no idea where it falls in the timeline (or if it properly does). Clark is both the jeans-and-t-shirt-wearing youngster from the first few issues, as well as the Superman who has the Kryptonian suit, etc.

There’s also a back-up story, “Absent Friends”. And guess what? There’s a note that points out this story takes place after NEXT issue in the series... WTF? It is, however, a rather touching story. But, what I don’t understand, is why it is here. Why isn’t it in the next issue?

Ultimately, though, the main story in this comic is just a mess. Superman is presented in two different ways. And I was utterly confused. Frankly, I have no idea how this got past any editors, assistant editors, or anyone else involved in the production of this series.

One thing I will say, though, is that the back-up story is presented in superb artwork. And it’s well-written. Is it just me, or should Sholly Fisch be writing this series, and not Morrison? Fisch seems to have a grasp of plotting, writing nuance and proper emotion. Maybe I’ve just missed something and don’t “get” whatever the hell Morrison’s attempting to achieve here, but… no, it’s just sloppy. 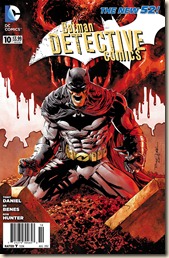 [The only synopsis of this that I could find bore no resemblance to what was actually in the comic, so I won’t include one.]

Huh, a group of psychotic Batman-impersonators are terrorizing Gotham, shooting up cops, ambushing a truck, and generally cutting a swathe through this particular area. The real Batman follows them down to the sewers, where he finds out the lengths they’ll go to protect whoever it is has employed them and what their real agenda is. Their leader is pretty freaky, and I’ve never seen him before... This is just the start to a new story-arc, and I thought it was pretty interesting, and nicely done. 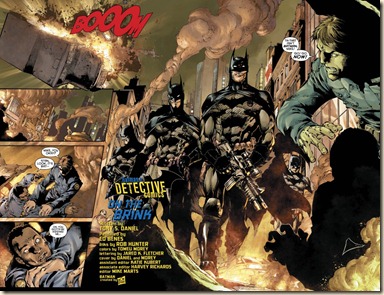 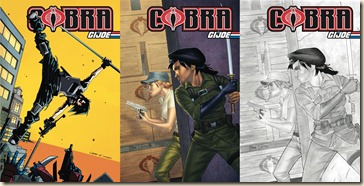 Armed with secret knowledge of Cobra’s inner workings, a rag-tag force of ex-villains and damaged heroes takes the fight to the darkest corners of the world, under the vigilant eye of Flint!

After facing a devastating loss against Cobra, the Joes’ budget has been slashed and its operations reorganized. Now, Flint leads a covert team comprised of newly-recruited, sword-wielding Ronin; former Cobra agent Chameleon, a.k.a. Erika La Tene, the deadly Lady Jaye; and support personnel Clockspring and Firewall. They are not your typical Joe or military operation, seeing as they are headquartered in a Las Vegas casino. Their mandate is to act on intelligence provided by Cobra traitor Tomax Paoli. The first piece of intelligence he feeds them is that the former Cobra Commander – killed by Chuckles last year – had a son, who might be the key to stopping Cobra.

This issue deals with the new team attempting to settle into their new environment, mission, and roles. Not only that, they’re getting used to the intelligence game. At the same time that the Joes are getting prepared for their first mission, assassins are also on the trail of the former Commander’s son. A pair of them confront each other, leading to a pretty cool showdown in Heathrow Airport.

This was a really good issue, actually. I enjoyed the pace, the type of story. The artwork’s rather basic and stripped down, but it does work rather well. It’s simple, but effective. 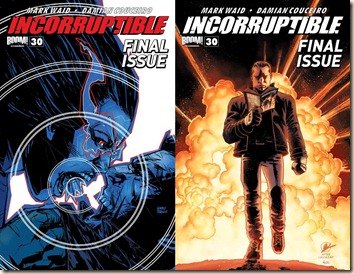 The end has come for comics’ favorite anti-hero, Max Damage, but not before an explosive conclusion that will leave fans reeling and finally answer the question…can someone truly be INCORRUPTIBLE?

Max and meteorologist Bill Henrie have told the people of Coalville that life on Earth is about to end: an unstoppable radioactive cloud is spreading across the globe (the result of the Plutonian’s actions in a past issue of Irredeemable). Max believed he would be helping, if he told the people of Coalville the truth, that it was the correct thing to do. Despite his good intentions, however, it was the wrong thing for him to do. Instead, the truth just lights a fuse, and the panicking citizens morph into a lawless mob.

So, Mac is losing faith in his ability to achieve anything good in the face of the oncoming destruction. “Do something!” someone shouts at him. “Why bother? Plutonian won. We lost. What matters?”

This wasn’t a bad issue. Unfortunately, it wasn’t the best, either. It’s an odd one, really. Max seems to have not really learned anything about human nature over the course of the series – a fact that doesn’t match many of his earlier actions in the series. The issue veered a little too far into schmaltz at the end, and lacked almost all of the grit that came to define this series in the first place. It was enjoyable, and does bring closure to the series, but it lacked edge.

If you’ve been reading the series, I’d definitely recommend you pick this up to know how it all ends. 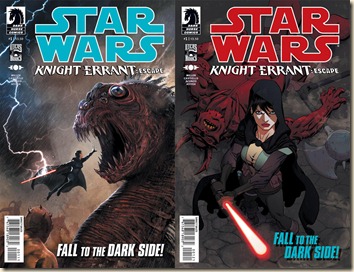 Jedi Knight Kerra Holt’s next mission starts with a very personal and ultrasecret investigation! But with the dark realities of Sith territory surrounding her, something unexpected may be taking hold of the lone Jedi! As she takes the first step toward her goal, Kerra knows there will be no turning back!

This is a pretty intriguing beginning. I’m not sure how it ties in to the previous Knight Errant story (I haven’t read any of it), but it offers up an interesting interpretation of the Sith and how they interact with the Force – more specifically, one Sith in here has an unusual connection to the Force, one that makes other people’s presences painful, with relief only coming through death. A really sinister twist on the Dark Side, but one that I thought was very interesting, and has a lot of potential. I’ll be keeping my eye on this series, for sure. 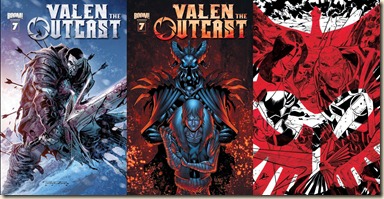 I really like this series. It offers up all the best tropes of fantasy, without seeming tired, unoriginal or uninspiring. It is, instead, a great, epic fantasy quest with engaging characters, a well-rounded (if not-yet-fully-revealed) world, and a lot of potential. In this issue, we finally get to Korrus Null’s stronghold, where Valen and his retinue must confront the lord of the undead! We learn of Null’s plan, what led him to turn Valen into an undead horror. And the issue builds to an ending I did not see coming.

Posted by Civilian Reader at 5:05 AM