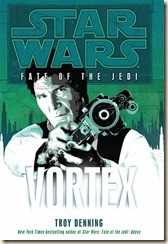 Book Six in the on-going Fate of the Jedi series

In a stunning turn of events, Luke Skywalker and his son, Ben, joined forces with members of the Sith armada sent to kill them – and turned their combined might against the monstrous being Abeloth, whose power was causing young Jedi Knights to go insane. With Abeloth gone and the Knights sane again, the Sith reverted to form, making a treacherous attempt on Luke’s life.

Luke and Ben have no time for retaliation. A new and even more insidious threat is rising, one that endangers not only the Jedi but the entire Galactic Alliance. Unless the Skywalkers survive to sound the alarm – and to pass along the secrets they have learned about Abeloth and the Sith – the galaxy will suffer as it has never suffered before. But the reinforcements they need remain grounded on Coruscant, where the political battle of wills between the Jedi Council and Galactic Alliance Chief of State Natasi Daala has reached a boiling point.

Now Luke and Ben must go on the run, taking along the inscrutable and dangerous Sith apprentice, Vestara Khai. With a host of Sith warriors in hot pursuit, the Skywalkers soon find themselves trapped on the moon Pydyr, caught between their former allies and a mob of angry Fallanassi. A new truce may be their only hope. But can a Sith ever be trusted?

With the Jedi’s most famous father-and-son team outnumbered and outgunned, the countdown to galactic disaster has begun – and time is running out.

Vortex throws you straight in at the moment the previous volume, Allies, ended. It’s been a while since I read that novel, so it took a couple pages to remember everything that had gone on leading up to this point, but after that I found myself sinking into the story again and my reading pace picked up considerably. I should say at the outset that I did enjoy reading Vortex a good deal – I’m an unapologetic post-Return of the Jedi Star Wars novel fanboy. However, it was not without its faults...

Vortex has a number of plot-threads that run through the novel – most of which have appeared in at least one of the other Fate of the Jedi novels. However, the structure of the novel can sometimes be frustrating. After a long pair of opening chapters that focussed exclusively on a pirate-ambush of Jaina and Lando, the novel gave us a couple of chapters on the Luke-Ben-Vestara story. After this, however, the novel jumps more frequently, and never really gives us the time to sink into the story – just as we’re getting comfortable in one setting, the perspective changes to another. This was somewhat frustrating.

The political machinations on Coruscant are not the strongest thread of the story, as the pace is rather slow and it’s not entirely clear why certain things are happening or why, in the case of the slave uprising, governmental reactions are so exaggerated. Some questions are answered as the novel comes to its more action-packed and exciting conclusion, but it’s difficult to ignore some of the shaky progressions over the course of the whole series.

Tahiri’s trial for the assassination of Imperial Admiral Pellaeon is still going on, but each time the books visits it, it just feels like it’s treading water (although, her lawyer’s inaction did provide a moment of levity at one point). The trial does picks up, just as every thread does, but it still feels a bit drawn-out. I really like the idea of a Star Wars-based courtroom drama forming a greater portion of a future novel – when the trial was unfolding on the page, it felt quite like a well-written contemporary courtroom drama. I’m not sure how this would actually work, but I think it would have considerable cross-over appeal.

This was rather distressing, actually, as in earlier novels, Han and Leia storylines were frequently the more interesting (for example, Dave Wolverton’s The Courtship of Princess Leia, Roger MacBride Allen’s Corellia Trilogy), with Luke’s threads sometimes becoming a little repetitive. I also think the courtroom element had potential to be explored in greater detail and at greater length. Towards the end of the novel, however, Han, Leia and Jaina Solo stage a prison break for two ‘mad’ Jedi who have been frozen in carbonite by Chief of State Daala. It’s a nice, if over-long, action sequence to wake us up after being a rather slow-going plot-thread.

After many long years of war, the galaxy is mostly at peace, and Chief of State Daala is doing everything in her power to keep it that way – including overreacting. Partly this is due to her understandable fear of the Jedi, an order she still doesn't fully understand, and - as we all know - the fear of the unknown can make even the most rational actor to do something irrational. The development of this story thread has been a bit uneven over the past five novels, and because less of Vortex is from Daala’s perspective, events seem to devolve rather quicker than one might expect.

The ‘Crazy Jedi’ epidemic that marked much of the trouble in the first five novels of the series seems to have been brought to an end, thanks to the apparent demise of Abeloth. Vortex at first feels like a post-action lull, but when Luke and his Sith allies realise they have been duped, they must race across the galaxy to an unexpected destination from Luke’s past, and learn more about Abeloth’s horrific nature. Sith apprentice Vestara’s allegiance and loyalties are frequently tested as she continues to spend time with Luke and Ben, and experiences the considerable contrasts between their working relationship and the one she “enjoys” with her father and Lord Taalon (the Lost Tribe expeditionary fleet’s commander). Despite Vestara’s constant betrayals, and Luke’s recognition of her Sithly ways, she is repeatedly able to take advantage of either Luke’s sympathy for her, or Ben's obvious and growing attraction and affection for her:

“though he remained convinced that forbearance was wasted on Vestara or any of the Lost Tribe Sith – Luke could not help admiring the [Ben]’s compassion and determination to give others a second chance, or even a third.”

The problem is, with this being book six, and the third with Vestara featuring prominently with Ben and Luke, the back-and-forth betrayals and eternally-noted distrust between the Jedi and Sith, was becoming a bit tediously cyclical. Thankfully, some pretty momentous events happen, which sets the series up for a possibly action-packed final three novels. (The final Fate of the Jedi novel, also by Denning, is titled Apocalypse, so one assumes things are going to kick off between the Jedi and growing Sith forces.)

There’s a real surprise with regards to the Jedi leadership on Coruscant (Luke was exiled in the first Fate of the Jedi novel, Outcast). This was a big surprise (I won’t spoil it). Hamner’s evolution as a character has been a bit strange, from the dependable sage and warrior, to a paranoid, not-particularly-adept political operative – it also suggests Luke has seriously bad judgement. His squabbles with the rest of the Jedi Council form a good deal of the novel, and events come to a head towards the end of the novel.

I love that novels in the Star Wars universe are still being released: I’m a huge fan of the original trilogy of movies, and I’ve read almost all of the post-Return of the Jedi novels and quite a few of the graphic novels (thanks to my sister and her former boyfriend for introducing me to them, back in the late 1990s) – revisiting the setting from time to time is like spending time with an old friend for a while. Indeed, while I don’t read much sci-fi, I would happily say that some of my favourite novels in that genre are from this universe (specifically, those written by Kevin J. Anderson and Timothy Zahn).

The novel threatened to be pure filler for the first half; the second half of the novel saw a lot of threads come together with some good action and writing; and the final 150 pages of the novel are packed with action and a couple of stunning revelations and events – it really picks up on all fronts, which was very pleasing as I had been starting to get frustrated (as you can perhaps tell from much of this review).

Overall, this is a good Star Wars novel, by one of the best authors writing in the setting. However, this is book six of nine, and despite some good content and writing, it feels too much like filler, and while reading it I knew there weren’t going to be any proper conclusions. I will certainly be reading the final three volumes in the Fate of the Jedi story, but I am once again left feeling like this novel was a lot of hurry-up-and-wait. Shorter overall story arcs are, I think, advisable.

Die-hard fans will lap this up, and it’s a good and enjoyable addition to the series. It’ll be interesting to see where they take the story next.