A quick interview with the author of The Conqueror’s Shadow: 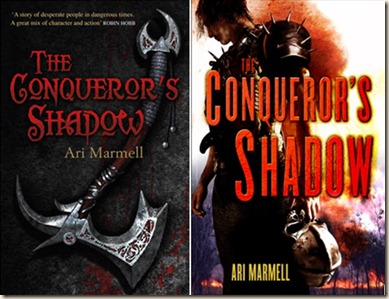 1. How did you come up with the idea for Conqueror’s Shadow? Who would you say is the biggest influence on your work?

The very earliest kernel of the idea was just one of those random thoughts that strikes out of nowhere: I was having lunch with my wife, and I just sort of came out with “Hey, wouldn’t it be cool to have a fantasy novel where the ‘hero’ is a retired evil warlord who has to come back to stop someone even worse?”

Really, the genesis was just that basic. Obviously, the concepts of the novel grew and evolved well beyond that – for instance, my decision to take the opportunity to take many classic fantasy tropes and twist them throughout the book came later, and was much more deliberate – but the core just sort of dawned on me.

As for my biggest influence? While there are several, if I had to pick one, I’d say probably Steven Brust. Specifically, his Vlad Taltos novels.

2. You’ve been writing and developing fantasy products for a long time, from Dungeons & Dragons to White Wolf’s Vampire: The Masquerade; what made you decide to finally create your own fantasy world, and how did you find that process?

The truth is, while I’ve been publishing mostly role-playing game materials for most of my career, my actual writing happened the other way around. I wrote five full-length original novels before I ever wrote a single word for the games (though I’d been playing the games for years). The first three of those novels were, to put it kindly, a learning experience, and are utterly unsalvageable. The other two, after massive rewriting, became The Conqueror’s Shadow and The Goblin Corps.

But at the time, I wasn’t having any luck getting my fiction published (in part, I’ll admit, because I wasn’t good enough yet). So when the opportunity came to write for RPGs, which were also a passion of mine, I jumped on it. As I said, though, the original stuff actually came first.

As to what made me decide to start shifting focus once more from RPGs to fiction? Simply the fact that I’m finally having some success with the latter. It’s always been my ultimate goal. (I don’t see myself abandoning the RPG stuff any time soon, though. It just won’t be as much of a focus as the fiction.) 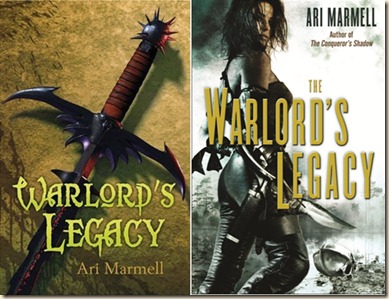 3. What can we expect from your upcoming novels, The Warlord’s Legacy (the sequel to Conqueror’s Shadow) and The Goblin Corps?

The Warlord’s Legacy picks up six years after TCS, with things having not even remotely gone the way one might expect from the ending of the first book. I think it’s a more mature novel; not necessarily a better book, but better written. (At least, it feels that way to me, and I hope it is.) While there are some far-reaching ramifications of what’s happening, it is, in a way, a somewhat more personal story for the protagonists than TCS. (This despite the fact that it’s a threat to his family that brings Corvis Rebaine
out of retirement in the first book.) I can’t really say more than that without spoilers, but I’ll admit that I’m very much looking forward to seeing how fans of the first book react to the second.

I did, incidentally, do my best to make TWL stand alone. It’s better if you’ve also read TCS – you’ll have a more emotional connection to the characters – but I’ve had several people read TWL first and tell me they didn’t feel like they were at all confused or missing important details. 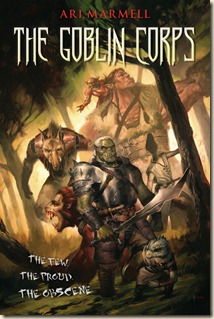 The Goblin Corps is something of a different beast. It’s completely unrelated to my other novels – different setting, different tone – and it’s rather more exaggerated. What I mean by that is, anyone who’s read any of my prior novels knows that I enjoy the juxtaposition of sarcastic humor and bloody violence. TGC takes both of those to an extreme. It’s both funnier and gorier than TCS, and while TCS focused on a very dark anti-hero, TGC actually focuses on the villains. They’re not “dark good guys”, they’re not looking for redemption; they’re the bad guys, and unapologetic about it.

Basically, take your typical almost Tolkien-esque epic fantasy. Then turn it around, so you’re telling a tale about what’s happening to the villains during these events, rather than the heroes. Then flavor the resulting story with a dollop of Quentin Tarantino and a tiny sprinkling of Sam Raimi.

4. How do you enjoy being a writer and working within the publishing industry? Frustrations, pleasant surprises, different processes depending on genre, etc.?

Well, I really enjoy working from home, for one thing. The dress code is pretty relaxed, and the hours are flexible.

Honestly? It has its ups and downs. Income is far from steady, there are no benefits, and a huge amount of my time is spent waiting and hoping. I don’t have access to nearly as much information as I’d like – in terms of sales, marketing, audience, etc. – and I wouldn’t know what to do with it if I did. There’s a lot of frustration, a lot of waiting, a lot of worrying.

But I’ve also gotten to meet and work with some truly fantastic people, including several who I now count among my very close friends. More importantly, I love what I do, and I truly can’t imagine doing anything else.

So far, there’s not a huge difference in terms of genre. Obviously, when I work on tie-in materials, there’s more creative control from above, but since I developed my career doing freelance work, I usually find that pretty easy to work with. And while it’s important for any given book to have only one hand actually at the rudder, I’ve found that the collaborative process can actually produce some pretty cool results.

5. What else do you have in the pipeline?

Well, I can’t go into too much detail, but I can say this much. In addition to The Goblin Corps, I’ll be publishing another novel through Pyr Books. It’s currently untitled, but it’s a fantasy set in a culture somewhat reminiscent of Renaissance France. It’s actually my first young adult novel, but it should prove perfectly accessible to my older fans as well.

My agent is currently shopping my first urban fantasy novel. (That is, modern or near-modern fantasy. Near-modern, in my case.) I obviously can’t talk about it until it sells, but I have really high hopes for it. I feel it’s one of my best books to date, if not the best.

And I’ll be doing some more tie-in novels in the future as well, though again, I can’t yet talk about what or for whom, I’m afraid.

Beyond those? Dunno. I have a whole heap of ideas, but which one(s) I go with really depends on how everything else turns out. (I wouldn’t mind going back to the setting/characters of The Conqueror’s Shadow and The Warlord’s Legacy, if the opportunity arises. But to be perfectly blunt, that’s all a question of sales, now, whether it happens or not.)

6. Who are you reading at the moment (fiction and/or non-fiction), and which books of 2011 are you most looking forward to?

I’m right in the midst of James Lovegrove’s Age of Zeus at the moment. I recently read Gary Corby’s The Pericles Commission and Peter Brett’s The Warded Man. Next on my list (in no particular order) are The Desert Spear (Brett again), The Wolf Age (James Enge), Shadow’s Son (Jon Sprunk), and, well, a whole mess of novels from Pyr Books.

Books I’m looking forward to? Man, there’s a lot; I’m sure I’m going to forget a bunch (and if any of my friends are on that list, I humbly apologize). Some are actually already out, but I haven’t gotten them yet. In any case, they include another heap of Pyr novels (far too many to list here), new instalments in Simon Green’s Nightside series and Drood series, Echo (Jack McDevitt), Unsympathetic Magic (Laura Resnick), Iorich (Steven Brust), Servant of the Underworld (Aliette de Bodard), the start of the Iron Druid series (Kevin Hearne)...

Man. At this rate, I’m not going to have time to write anything...

Big thank you to Ari for taking the time to answer these questions!

The Conqueror’s Shadow is out now in both the US and UK, and was reviewed on this site, here. The novel has also been nominated for the 2010 David Gemmell Legend Award for Fantasy!