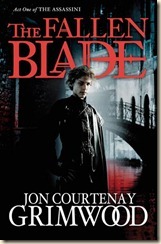 Act One of The Assassini – Assassins, Venice and Vampires

Venice, 1407. The city is at the height of its powers. In theory, Duke Marco commands, but Marco is a simpleton so his aunt and uncle rule in his stead. They seem all powerful, yet live in fear of assassins better than their own.

On the night their world changes, Marco’s young cousin prays in the family chapel for deliverance from a forced marriage. It is her misfortune to be alone when Mamluk pirates break in to abduct her – an act that will ultimately trigger war.

Elsewhere Atilo, the Duke’s chief assassin, cuts a man’s throat. Hearing a noise, he turns back to find a boy drinking from the victim’s wound. The speed with which the angel-faced boy dodges his dagger and scales a wall stuns Atilo. He knows then he must hunt him. Not to kill him, but because he’s finally found what he thought was impossible – someone fit to be his apprentice.

Award-winning author and master storyteller Jon Courtenay Grimwood turns his hand to fantasy for the first time – with impressive results. In The Fallen Blade, he blends history, politics supernatural fantasy and horror to create a compelling, addictive and dark vision of an alternative Venice.

No novel about Venice at this time would be complete without an abundance of Machiavellian politics, and it certainly infuses the relationships and interactions of all the characters in The Fallen Blade, offering a complex and rich background for the personal stories that unfold on the pages. It is never clear just how much subtext a statement or action may have, and agendas are hidden, and jealously and secretly nurtured. Naturally, pretty much all the main characters in the novel have an unhealthy paranoia and level of distrust for even loved ones’ motives. All the while, outside forces – be they foreigners living in Venice, or the mysterious and brutal krieghund who stalk the shadows – are circling the city, probing for weak spots to exploit.

All of the characters in the novel are well-drawn and three-dimensional, and the author avoids clichés or tired portrayals of politicians or paupers. Tycho, the boy with a strange hunger, is particularly interesting and complex: The confusion he feels, in a new city with only fragmented and muddled memories, is palpable, and the author puts us right there with our protagonist as he stumbles and stalks his way through night-time Venice, trying to figure out what’s going on with his mind, memories, and body.

All the characters in the novel are struggling with the directions their lives are taking: Giulietta, the high-born cousin of the current Duke, is rebelling against the society she inhabits and those who would use and abuse her in the pursuit of their schemes. Roderigo, the honest customs officer, unwittingly finds himself on a side in the Ducal struggles he did not actively choose to join. Atilo, the co-opted enforcer and aging head of the Assassini, whose love for another of the Ten’s daughters could be potentially lethal, is coming to terms with a recent promotion and the fact that his age will soon start affecting his ability as Duke’s Blade. Iacopo, Atilo’s existing apprentice – ambitious, covetous of his lord’s bride-to-be, and a thug who has no love for Tycho’s selection and position as Atilo’s heir, tries to thwart Tycho’s rise at every turn. Alonzo, the Prince Regent, is intent on usurping his imbecilic nephew from the throne which Marco’s mother Alexa refuses to allow him to abdicate from – they are the two power brokers in Venice, endlessly vying for control and moving their pawns across the political board.

“Alonzo’s father, grandfather, one brother and his sister had fallen to the dagger. Both Republics began and ended with murder. In Rome, they joked that assassins were more common in Venice than canals.”

The Fallen Blade is written in a very engaging yet unorthodox fashion. The first handful of chapters mirrored Tycho’s confusion, at the same time as having to introduce us to all the main players in the plot. This resulted in a number of perspective-changes in rapid succession, not always seamless. Some readers, particularly impatient ones, might not like this, but anyone who either likes things a little different, or is patient, will be thoroughly rewarded when the plot kicks in; which occurs after Tycho finally meets the three women (well, girls really) who would change his life. Tycho’s life in Venice before his training with Atilo, and the training itself, isn’t described in as much detail as I would have liked, but what is shown is alternately interesting, brutal and disturbing.

Jon Courtenay Grimwood’s writing evokes the Venetian atmosphere and politics of assassination and intrigue very skilfully. The city is wonderfully and darkly rendered, in minimalist detail that is perfectly evocative. The author’s style is unorthodox and might not appeal to all, but I found it riveting and engrossing, perfectly reflecting the emotions his characters are feeling, and his ability for creating atmosphere on the page easily rivals Anne Rice’s early works. I’ve seen a number of comments comparing this novel’s tone with the works of Shakespeare, and from my limited experience of the Bard’s work, I can certainly see the intrigue and dramatic plotting he is famous for at work in The Fallen Blade.

At a time when vampires and werewolves have been almost wholly co-opted by the ‘paranormal romance’ genre, The Fallen Blade is a superb reclamation of the vampire genre for grittier and darker fantasy and a breath of fresh air. This was the first novel by the author I’ve ever read, and I am so very glad that it exceeded my expectations. His writing and plotting had me hooked from the start, and I was twice kept up until 4am reading as much as I could before biology won and I passed out from tiredness.

Brilliant, haunting, dark, gothic historical fantasy… This is the best vampire novel written since The Vampire Lestat, while simultaneously being very different and original. A final denouement is not present, as the novel leaves some questions unanswered, and the mystery of Tycho’s transformation remains (though we are given some hints in the closing chapters), to be answered in the next, highly-anticipated, Act of the Assassini…

In January, Jon Courtenay Grimwood commandeered the Orbit Website, and wrote about his writing practices and what drew him to Venice. 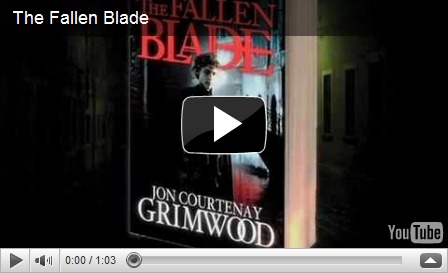