I’ve never read any of his work, but T Jefferson Parker is a very highly praised crime writer in the US (I’ve never really noticed him in the UK), and I just stumbled across information about his latest book, The Border Lords, which comes complete with this striking artwork: 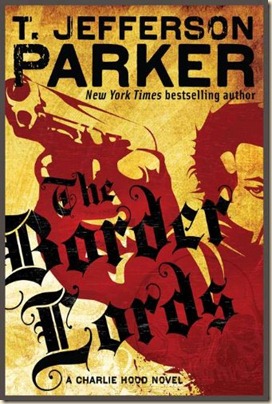 ATF agent Sean Ozburn is deep undercover supporting the sicarios of the Baja Cartel when he suddenly goes completely dark, his only communications being the haunting digital videos he sends to his desperately worried wife, Seliah. Charlie Hood must determine if Oz is simply chasing demons deeper undercover than anyone has ever gone, or whether his friend has suffered a permanent break with his mission and his moral compass.

A crime novel of unprecedented scope and unrivalled storytelling ambition by one of our most treasured talents, The Border Lords revisits the fevered landscape of America’s southern border-and confronts the unexplored depths of humanity's dark soul.

The cover artwork is reminiscent of something you might find connected with Grand Theft Auto or Saints Row, but there’s no denying that it’s eye-catching.

I’m not sure that I’ll get the chance to read this anytime soon, having not read anything else in the series, but the premise is interesting if a little heavy on the genre (and political) tropes. That it’s set in the Southern USA is a draw, however, as my thriller/crime fiction tastes usually lead me to read authors whose work is set in or around Washington, D.C., New York and also Minnesota (that last would be John Sandford, my favourite crime writer).

The Border Lords is the fourth Charlie Hood novel, following in the wake of LA Outlaws (2008), The Renegades (2009), and Iron River (2010). All four novels revolve around US-Mexico border issues.

Posted by Civilian Reader at 2:28 AM