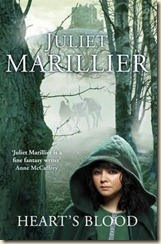 An engaging and original take on a favourite fairy-tale.

A haunted forest. A cursed mansion. One girl running from her past and one man who’s more than he seems to be. A stunning tale of love, betrayal and redemption.

Whistling Tor is a place of secrets, a mysterious, wooded hill housing the crumbling fortress of a chieftain whose name is spoken throughout the district in tones of revulsion and bitterness. A curse lies over Anluan’s family and his people; the woods hold a perilous force whose every whisper threatens doom.

And yet the derelict fortress, which houses both good and evil, is a safe haven for the troubled young scribe Caitrin who is fleeing her own demons. Despite Anluan’s tempers and the mysterious secrets housed in the dark corridors, this place, where nobody else is prepared to go, seems exactly what she needs.

As Caitrin comes to know Anluan and his home she realizes there is more to the broken young man than it first seems. And it is only through her love and determination that the curse can be broken and Anluan and his people set free…

In her adaptation of “Beauty and the Beast”, Juliet Marillier has, in some respects, taken a fairytale and turned it into a ghost story. Heart’s Blood has all the traditional elements of the story: a beautiful young woman, a curse to be broken, a bargain over a plant found in a charmed garden, and magic mirrors. However, Whistling Tor is not an enchanted castle with a monster for a master; it is unsettling more than anything else, and its chieftain is a human being warped by unhappiness. The curse has not turned him into a monster; rather, it has shackled him to a group of violent spirits he must struggle to control.

Most importantly, the fortress is not a distant and isolated place removed from humanity: the crisis of the novel occurs precisely because the chieftain of Whistling Tor, despite being cursed, remains connected to and responsible for people in the outside world. Marillier places this conflict in the context of the Norman conquest of Ireland, forcing her characters to contend with the dangers of the curse while they confront the threat of invasion.

Marillier does an excellent job of creating the atmosphere of Whistling Tor. It is, at least at first, creepy without being overtly mystical or sinister: it is a place where much seems normal, and it is only the accumulation of small details that are slightly off that gives it its uncanny feel. The sense of unease with which the novel begins builds as Caitrin learns more about the curse, and as its related magics become more active.

Without feeling rushed or frantic, the pace of the novel builds quickly, but is at times inconsistent. I found it somewhat jarring when, after building effectively to a point of climax, the narrative at Whistling Tor was cut off while Caitrin dealt with the personal demons that drove her from her home before the beginning of the novel.

Marillier peoples her world with well-drawn and engaging characters. Caitrin and Anluan are both appealing; however, it is the minor characters who really bring the world of Whistling Tor to life. The bitingly sarcastic yet affectionate relationship between Rioghan and Eichri is comic and touching, and the tragic state of Gearróg and the ghost girl is realised poignantly. Marillier builds complexity into even her smallest characters, creating an intricate web of loyalties and motivations for the diverse population of Whistling Tor.

Heart’s Blood is an original take on a classic story, a skilful blend of fantasy, ghost story, romance, and historical fiction, and a pleasure to read.

Posted by Civilian Reader at 10:44 AM