“Empire in Black and Gold”, by Adrian Tchaikovsky (Tor) 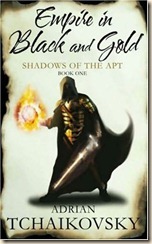 The city states of the Lowlands have lived in peace for decades, bastions of civilisation, prosperity and sophistication, protected by treaties, trade and a belief in the reasonable nature of their neighbours.

But meanwhile, in far-off corners, the Wasp Empire has been devouring city after city with its highly trained armies, its machines, its killing Art… And now its hunger for conquest and war has become insatiable.

Only the ageing Stenwold Maker, spymaster, artificer and statesman, can see that the long days of peace are over. It falls upon his shoulders to open the eyes of his people, before a black-and-gold tide sweeps down over the lowlands and burns away everything in its path.

But first he must stop himself from becoming the Empire’s latest victim.

The Shadows of the Apt novels have been sitting on my shelf for quite some time, and I finally decided that I didn’t want to put off reading it any more. February 2011 sees the release of the sixth book in the series, so I thought this review might also serve as an introduction to new readers. Over the course of the next few months, I intend to catch up and get as many of the novels read and reviewed as possible (in between newer releases).

Before discussing the plot of Empire in Black and Gold, it’s necessary to spend just a little time explaining the most distinctive feature of Tchaikovsky’s creation, and that is the “kinden”: humans in this world display insect characteristics

The Empire in Black and Gold predominantly follows three main paths. The first is that of Stenwold and Tisamon, as their long-held fears of the Wasp Empire slowly become realised. After an initial push of invasion and conquest, the Wasps have been distracted from the Lowlands by a protracted war with the less-advanced Commonweal (the home of Spider-, Mantis-, and Moth-kinden), as well as distracted by uprisings and revolts in newly-subjugated regions. Sadly for Stenwold, who has single-handedly led attempts to awaken his colleagues and peers to the pending threat of invasion, he is pushing against an immovable, entrenched indifference of those comfortable in their knowledge and long-held misperceptions, while also up against the unmovable profiteering manufacturers of Helleron, who are blinded by the business opportunities the Wasp Empire offers.

“The Wasp-kinden, who are described in our oldest records as barbarians primarily interested in cutting each other’s heads off, are an empire now.”

[Incidentally, this is not unlike the reality-check the Chinese and Japanese experienced in the mid-1800s when the ‘Western barbarians’ came knocking at their gates, and imposed the Open Door on them.]

For Stenwold and Tisamon, the novel is a journey come full circle, as the feared Wasp Empire they battled against seventeen years ago is once again rearing its bellicose head.

The novel also follows the journey of four companions after they are sent out from Collegium to gather intelligence on the expanding Wasp Empire: Cheerwell, Stenwold’s Beetle-kinden niece; Tynisa, a spider-kinden adopted by Stenwold; Salma, a confident-yet-enigmatic Dragonfly-kinden and duelling partner of Tynisa and Che; and finally Totho, a mixed-breed engineer who was part of the group’s duelling club and also taught by Stenwold. For the students, Empire in Black and Gold is a coming-of-age story.

The final main narrative of the novel is from Thalric’s perspective, the Wasp Captain and main antagonist of our heroes. Throughout the novel, Thalric must balance his two roles as a Captain in the Imperial army and also as a Rekef Outlander – effectively the Wasp Empire’s secret service and Inquisition. This leads him to question the nature of his loyalty to the Empire and just how far he is willing to go to preserve it.

The novel is certainly eventful, but it never feels over-done, and the experiences of our heroes – particularly the younger four – are all important to illustrate the evolution the characters go through, as they venture from the cloistered, safe world of academic Collegium, and out into the real world. There is something of classical Roman and Greek culture about the Collegium: it is a city-state ruled by a moneyed merchant class and professors, and when Stenwold addresses the ‘Amphiophos’, paintings of the Roman Senate and Forum are easily brought to mind by the scene.

As an introductory novel, Empire in Black and Gold delves into a number of the issues of the world – not just the expanding Wasp Empire, but also social issues that permeate the world’s cultures. Specifically, race and not a little bigotry that informs many inter-species relations. Totho, the ant-beetle halfbreed is a victim of the society in which he lives. Even Stenwold, the elderly sage and mentor of our four young heroes, is not immune to the inherent biases of his people, much to Totho’s disappointment:

“at Collegium he had acquired scholarship and skills, but the weight of his ancestry was like a chain about his ankles. He had all the written rules on his side, and all the unwritten ones working against him.”

My only real issue with the novel was that it took a little long to get going – not relative to the length of the novel (600+ pages), but I was still wondering if things would pick up around page 100 – especially after the great introductory paragraph, which saw Stenwold’s flight from a besieged Myna, seventeen years before the bulk of the novel takes place. When the story picks up, however, I became addicted to both the plot and also the characters: despite their alien insect-natures, Tchaikovsky writes them all in a way guaranteed to engender sympathy for their various plights – be it Cheerwell’s bad luck at getting into dangerous scrapes; Tynisa’s difficult acceptance of her parental heritage; Totho’s struggles with being a half-breed; or Stenwold’s fear for his charges, who he has put into ever-more dangerous position.

The world Tchaikovsky has created, and the characters he has peopled it with, are engaging and brilliantly realised. The ‘insect-kinden’ aspect of his world is inspired and – as far as I’m aware – utterly original. The amount of research and preparation that must have gone in to creating this world is phenomenal. (While reading the book I did discover that Tchaikovsky studied zoology at university, so this would certainly have helped.) After finishing the novel, I was surprised that there was still a lot about the Apt and Art that was left unwritten. This is no bad thing, as it promises future revelations and greater understanding of this trait in other volumes of the series. However, I’d be lying if at times I wasn’t a little confused, particularly towards the beginning of the novel, as aspects of the Apt and Art that I thought were species-specific appeared not to be. I’m eager to start reading the rest of this series as soon as I can. (I’ve heard that, not only does Tchaikovsky explain the Apt in more detail, but he frequently introduces more species of kinden – the possibilities he’s opened his world and novels up to are almost limitless.)

The story is grand in scope, featuring both classic fantasy as well as classic historical themes – I saw some surprising allusions and echoes of classical history in the novel, which were very welcome in a genre that seems to prioritise Machiavelli as its predominant political inspiration (which, don’t get me wrong, is no bad thing in and of itself). Some of the plot elements – the invading outsiders, the personal journeys characters experience, the clockwork/steam-powered technology level, and so forth – may be popular and familiar in the genre, but when you add this to the original genetics and (limited) magic-system, this is a wholly original work of fantasy.

Tchaikovsky’s writing and world-building are superb, and his narrative wraps itself around your imagination like a comforting blanket, and it is oh-so-easy to lose yourself to the story. The pacing of the novel is quite varied – there are more-languid chapters, but the action sequences are great, and the intrigue on all sides is expertly crafted as the plot unfolds.

This is a brilliant fantasy creation, and with many more novels already published and on the horizon, I imagine Tchaikovsky’s work will be delighting fans for many years to come. Knowing that the series continues for a good number of books will also prepare you for the ending – it sets up the rest of the series, and many of the characters in Empire in Black and Gold are recurring in future volumes.

Shadows of the Apt: Empire in Black and Gold, Dragonfly Falling, Blood of the Mantis, Salute the Dark, The Scarab Path, The Sea Watch (February 2011), Heirs of the Blade (August 2011)