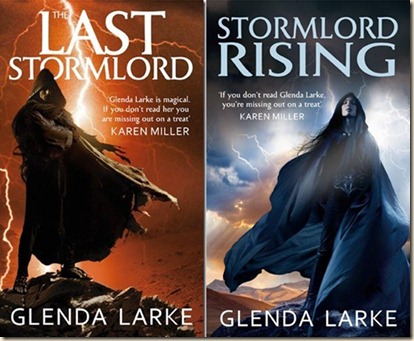 “Water is life, and the wells are running dry…”

The Last Stormlord and Stormlord Rising are the first two novels in Glenda Larke’s brilliant new Stormlord Trilogy. With an original world, and a gripping plot, these books are a pleasure to read (despite some early problems with pace), and should leave readers excited and impatient for the final volume.

Shale is the lowest of the low – an outcast from a poor village in the heart of the desert. In the desert, water is life and currency, and Shale has none. But he has a secret. It’s the one thing that keeps him alive and may save all the cities of the Quartern in the days to come. If it doesn’t get him killed first… Terelle is a slave fleeing a life as a courtesan. She finds shelter in the home of an elderly painter, but as she learns the strange and powerful secrets of his art she fears she may have traded a life of servitude for something far more perilous… The Stormlord is near death in his tower and there is no one, by accident or design, to take his place. He brings the rain from the distant seas to his people. Without a Stormlord, the cities of the Quartern will wither and die. Once he is dead, war arrives.

The nomadic Reduners have put the Quartern’s rainlords to the sword, leaving their cities without water or hope. Shale still lives, despite being betrayed, drugged and sold to his greatest enemy. Yet Shale needs his adversary more than his freedom, as unless they channel the rains together, thousands will die. For Shale isn’t a Stormlord in his own right – at least, not yet. Only Terelle could help him turn things round, but she’s a prisoner herself and far from home.

And a new force is rising in the desert, a power that can move the sands themselves. The Reduners are hailing this power as god-sent, and its impact could transform a world.

When I first started The Last Stormlord, I must admit to becoming slightly impatient with it. The novel has a lot of ground to cover: Larke begins with Terelle and Shale in childhood, and follows them and the members of the Stormlord’s circle over some years as the Quartern hurtles towards crisis. The individual storylines are interesting to read, but much of the first half of the book feels like it is putting things into place in preparation for the story to begin (the events mentioned in the back cover copy do not occur until well into the novel). This was initially frustrating, but well worth pushing through: once Larke has everything set up, the pace of the novel picks up enormously, with events quickly building to a gripping finale that left me eager to read more.

Stormlord Rising picks up exactly where The Last Stormlord leaves off, both in plot and in pacing. While I enjoyed the first novel, it is in its second volume that The Stormlord Trilogy really comes into its own. Having established her world and characters in the first book, Larke uses the second to develop and explore them to their full extent. The plot moves quickly without rushing, and Larke evokes settings and relationships in beautiful detail without weighing her narrative down with excessive description and exposition.

The world and magic system that Larke has created is original and intriguing. The Quartern is essentially a giant desert that has, through irrigation technology and magical intervention, been made habitable for humans. It is a society based on increasingly strict conservation of water, in which wealth and poverty are determined by one’s access to that resource. The details of this world are wonderfully realised – from the ‘pedes’ (giant, millipede-like creatures that are ridden like horses) to the religious system in which leaving water to evaporate in the sun is the highest form of worship (because it is the greatest sacrifice), the Quartern is alien yet filled with familiar practices, concerns, and conflicts.

The “water sensitivity” that constitutes the series’ magic system relies in some ways on a common magical trope – magic born of an affinity with one of the elements appears frequently in fantasy. However, in this world this affinity is less a mystical communing with nature than it is a practical skill dependent on natural talent. Both training and innate ability are necessary to wield this magic properly, and while the Quartern is utterly dependent upon it, it is by no means a crutch, nor is it infallible: water sensitivity is both problematic and unreliable. In Stormlord Rising, we begin to see that even the rainlords and stormlords themselves have very little understanding of the nature and foundation of their power.

Larke’s characters are varied and interesting: whether engaging, off-putting, appealing or distasteful, they are always nuanced and complex. In some ways, the broad cast of characters in The Stormlord Trilogy represent a Les Misérables for their own society: while some are easier to see as merely power-hungry or evil, most are in some way injured or constrained by the world in which they live. One benefit of the time Larke takes to set her scene in The Last Stormlord is that she is able to introduce all of her characters, and their relationships to one another, in detail. Shale, Terelle, Ryka, Kaneth, Nealrith, Laisa, and Tarquar are all given space to become full, well-rounded entities.

It is especially interesting to see how these characters change and grow through the two books. I found the stories of Shale and Ryka particularly compelling in this respect: each must struggle with seemingly impossible situations, forced to compromise and sacrifice in order to save themselves and those they care about. Shale, born in poverty, must learn to master his powers and to navigate the difficult political waters of the Quartern on the fly; Ryka begins the trilogy as a sheltered scholar and must find the strength and cunning to survive as a slave and protect her family.

Larke builds the personal conflicts that drive the novels incredibly well. This is not a simple story of a clash between good and evil: in what rapidly emerges to be a difficult, if not impossible, situation, the clash between equally well-intentioned people is much more common, and more troubling.

The Stormlord Trilogy is a broad, sweeping story of a civilisation in crisis, and as such, it asks broad, sweeping questions. While we may marvel at the ingenuity, both technological and magical, that has allowed a civilization to flourish in an environment that should have been virtually uninhabitable, there is in these novels a lurking indictment of human hubris and the dangerous arrogance that leads mankind to believe it can control the natural world. This is a world in which people have quite simply failed to manage their resources, over-confident in their expectation of magical intervention that will save them all, and completely at a loss when this intervention fails to materialise (or, even more worrying, does not suffice). There are parallels to current environmental concerns at work here, but the ethical and intellectual problems that Larke’s characters must face are striking without them. They must decide how much they are prepared to compromise and sacrifice for basic survival – for themselves, for their loved ones, and for their entire civilisation.

Fascinating, compelling, and exciting, these two novels are great reads. I can’t wait for Stormlord’s Exile.