“Tome of the Undergates”, by Sam Sykes (Gollancz / Pyr) 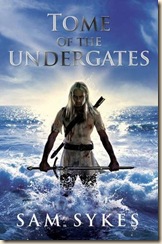 The beginning of something new. Something exciting. Something slightly twisted…

Long has man dreamed of communing with heaven, to assert his own virtues and speak to the Gods he claims to serve. The Aeon’s Gate was a relic designed for such a purpose, a door to enigmatic deities and answers. The Tome of the Undergates, its key. Or so Lenk was told.

From the moment he and his companions were assigned to protect the tome, and its clergyman escort, it became clear that the book was an object of desire. If the pirates clamouring for it hadn’t made that clear, their leader, an ancient demon forgotten by time and mankind alike certainly did. And no sooner did the tome fall into the creature’s hands that it likewise became clear that the Gate was a door that opened two ways: one to the heavens and one to a place decidedly worse.

Now Lenk has been charged with another mission: find the tome before the demons use it to open the door to release their legion kin and their horrific matron into the world.

Simple enough, perhaps, and made simpler by a band of renegades and degenerates that can barely tolerate each other.  A murderous rogue hides secrets from his past from the pious clergywoman harbouring something far darker.  An astonishingly socially inept wizard seeks to learn how to communicate with people from a hulking, monstrous dragonman who regards the term ‘people’ as interchangeable with ‘vermin’.  A tribeswoman from the race of savage shicts, long known for their hatred of humanity, forms an attachment toward Lenk that may or may not be driven by the urge to find out exactly what that haunting voice in his head is saying to him all the time.

The mission, simple. Survival, not so much.

When I started reading Tome of the Undergates, I got the impression that I was reading the antidote to everything I used to find insipid about fantasy – there are no perfect souls, immaculate heroic warriors or particularly fair maidens in this novel. It promised some great things.

The opening excerpt from Lenk’s journal is an amusing comparison and examination of the differences between the respectable soldier, less-respected yet still somewhat-honourable mercenary, and the bottom-feeding untrustworthy adventurer. It belongs in a fantasy manual, and was a great introduction to the world Lenk and company inhabit. (Each Act is introduced with a passage from Lenk’s journal, each entertaining and well used to move the story along.)

Sam Sykes has a somewhat scary imagination. His creatures are horrifying, ‘gribbly’, and especially so when considered alongside his considerable gift for description, simile and metaphor (which he sometimes indulges in just a touch too much). The main characters are brilliantly drawn, all highly flawed, sociopathic, or deranged. And they claim to not like each other at all (it’s more complicated than that, as becomes clear over the course of the novel). One (the female shict – seems to be the ‘elf’ in this reality) doesn’t like humans, and keeps a tally of how many she’s killed, while at the same time being fascinated (perhaps infatuated) by Lenk; one seems perfectly comfortable eating humans, and is disappointed when battles are too easy; the wizard is confounded by women and what impresses them, not to mention incredibly young; another is a rogue good with the sneaking and knifing, and a more complicated psyche and past than his companions believe. And Lenk, the leader of this merry band of total misfits, is starting to hear voices (which reply and sometimes can wrest control of his limbs), as well as being rather short and prone to getting a beating.

Sykes is good at translating his brand of humour into his novel, but he doesn’t seem to have exercised much self-control, which is perhaps also a fault of his editors. He doesn’t quite have the depth of Abercrombie, or the stylish flair of Lynch, but Tome of the Undergates does show clear evidence of Sykes getting there – he shows a great and substantial appreciation for the darker side of human nature, and is unafraid in showing it in his characters (one might say he revels in it).

While there is plenty to be happy about with the novel, it is not without its flaws. The opening battle(s) takes a little too long (it consumes the whole of Act I, which is approximately 25% of the novel), and it is also a little strange. This was a pity, as the diary-introduction and the first chapter were extremely strong – I had a number of people asking me what I was reading to make me chuckle out loud so often. But then, after setting the scene, it just seemed to keep going... If it was meant to get us familiar with the characters, Sykes managed that far quicker than I think he realised. The aftermath of the battle, likewise, offered more than the battle itself.

Sometimes the novel and Sykes’s prose are a little weird, as the author indulges an apparent desire to weird the reader out. For example, the strange exchange between Asper and Denaos about the toilet habits of their companions, and another, metaphor-filled scene describing Lenk vomiting. I don’t really understand what purpose it served, other than appealing to the author’s fondness for peculiarity. That being said, there are also scenes in which his characters intelligently argue for and against religion and the nature of gods and belief.

The banter between the disparate companions, while for the main amusing, sometimes is rather repetitive – at one point I found myself muttering, “Ok, they don’t like each other, we get it!” It’s a minor concern, as Sykes has been able to make us familiar with his characters quicker than one might expect in a fantasy series (while still retaining a certain amount of mystery and ambiguity over some things about their pasts and abilities). As a character-driven fantasy, it is also unfair to complain about this, I suppose.

Tome of the Undergates shows a lot of promise for future instalments of the series, and I will certainly buy book two, as soon as it’s available. In this debut, the balance between plot and characterisation skews far more towards the latter than the former, which sometimes made it feel as though the plot was a device purely with which to bring this disparate band of misfits together. There is nothing wrong with this per se, but given the author’s vivid imagination, not to mention the length of the novel, I had hoped more would actually happen.

Grimly characterised, and highly imaginative, if somewhat self-indulgent, Tome of the Undergates is an intriguing, original take on the classic fantasy band-of-adventurers tale. Sykes takes gleeful aim at the tired tropes of fantasy and turns them on their head, warping them to suit his sense of humour and dark mind. My impression of the novel is mixed, as flashes of genius are sometimes subsumed by self-indulgence and a less-than-strict focus on the plot. I hope the second book in the series, now that he has established the characters so well, offers a little more story, plot and adventure. However, considering this is a debut, I have no problem seeing Sykes becoming and enduring and successful voice in fantasy.

A cautious recommendation, this should appeal to the darker-minded fantasy fan.