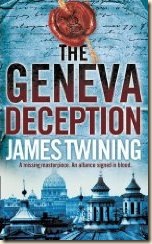 A missing masterpiece. A shocking truth. An alliance signed in blood…

For Lieutenant Allegra Damico, the brutal murder of a mafia enforcer offers her an unexpected opportunity to jump start her career. When the body of a senior official at a Vatican-backed bank turns up under similar conditions, it becomes clear the killings are, in fact, the opening shots of a war.

In Las Vegas, former art thief Tom Kirk has agreed to help Special Agent Jennifer Browne handle the recovery of a priceless Caravaggio. The painting, stolen over forty years before, has suddenly surfaced and Jennifer is determined to recover it, but a sniper lies in wait. Tom, accused by the FBI of being involved in the shooting escapes to Italy, crossing paths with Allegra. Realising their cases are connected, they decide to team up.

What they uncover is a vast and powerful conspiracy stretching from the scarred fields of Italy to the marbled halls of the world’s greatest museums. A conspiracy built on the graves of the dead and the blood of anyone who dates stand in its way.

In this fourth Tom Kirk novel, Twining once again showcases his skill at conjuring plots that centre on intricate, international criminal conspiracies and, of course, expensive art.

The previous three novels featuring Tom Kirk were all happily devoured by this reviewer, and it was only through accident that it’s taken me this long to finally get around to The Geneva Deception. While still very interesting, there are some flaws to go along with the author’s obvious strengths.

First, the pros: Twining’s familiarity with the art world (not only the museums, but also the European centres of art – especially those in Italy) is superb, and the detail comes across as natural and unforced. Kirk is a strong protagonist, and Allegra is an interesting addition to the series. The story is well constructed, and Twining takes the reader on quite the tour of Rome. There are a few scenes that feel like The Da Vinci Code, but it’s only because of lazy mental reference to the opening scenes of Dan Brown’s mega-seller in the museum – Twining is far ahead of Brown in turns of style and quality.

Some of the flaws of the novel come hand-in-hand, or as a result of some of its strengths. Twining, a detail-oriented author, has perhaps gone a little too far in The Geneva Deception, as he describes everything in considerable detail. It’s not to the same level as the details of Patrick Bateman’s morning ritual in the opening chapter of American Psycho, but it’s noticeably higher than could be considered wise. Everything is described: we get exact model descriptions of suits, watches, guns and the bullets available to them, vintage cars... It’s sometimes exhausting – certainly in the opening chapters, when Twining hasn’t quite got the plot going yet. Sure, it adds an extra level of authenticity for an art thief to know about the finer things in life, but it also screams a little bit like “Look how much research I’ve done!”

The story picks up around Chapter 15, when the art deal goes wrong in the Las Vegas Casino, and Kirk has to keep things together at the same time as dealing with a significant death (which he seems to cope with far too well). The pacing throughout the novel is just rather uneven and, for me, didn’t match up to the superb quality of his first two novels (The Double Eagle and The Black Sun), both of which I loved.

Overall, this is a good book, and a fun read. Unfortunately, and for reasons I can’t understand, Twining either has written this without strict editorial supervision, or his editor wasn’t paying too much attention. It takes approximately half of the novel before all the events described in the blurb on the back of the paperback have happened. While this isn’t bad per se, it was a little disappointing to know, basically, the first half of the novel before cracking open a single page.

If you like your thrillers a little less break-neck in pace, coupled with intricate plotting and an international setting, not to mention some excellent insight into art and the art black market, then The Geneva Deception should appeal. It’s not the author’s best novel, but it’s certainly still well worth reading.