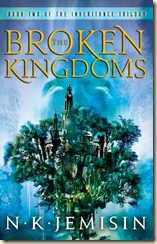 Gods & Mortals. Power & Love. Death & Revenge. She will inherit them all…

In the city of Shadow, beneath the World Tree, alleyways shimmer with magic and godlings live hidden among mortalkind. Oree Shoth, a blind artist, takes in a homeless man who glows like a living sun to her strange sight.

However, this act of kindness is to engulf Oree in a nightmarish conspiracy. Someone, somehow, is murdering godlings, leaving their desecrated bodies all over the city. Oree’s peculiar guest is at the heart of it, his presence putting her in mortal danger – but is it him the killers want, or Oree? And is the earthly power of the Arameri king their ultimate goal, or have they set their sights on the Lord of Night himself?

At the end of The Hundred Thousand Kingdoms, Jemisin’s world was turned upside down, as the truth about their gods was revealed to the Arameri elite. In The Broken Kingdoms, set a decade later, the author takes us into a different level of society – in this second volume she takes us into the lower classes.

The new perspective allows Jemisin to further flesh out the world she has created, and the ‘commoner’ perception of the changes to the social order are interesting, giving the novel a very different feel to Hundred Thousand Kingdoms. Thankfully, however, the author doesn’t spend too long world-building. In some ways, this was strange – the lives of the commoners living beneath the World Tree are entirely different from those who formed the sole focal point of the first novel. But then again, Oree’s blindness allows for a more interesting approach to the world: descriptions are different for starters, focusing more on smell and touch, and also the impressions these sensations bring to Oree’s mind.

Certain aspects of life in the city are changing, particularly the religious core that formed around the worship of Itempas, the ‘Bright Lord’. After the godly coup of Hundred Thousand Kingdoms, religious uncertainty reigns. As Oree says at one point,

“For centuries, millennia, the world has danced to a single flute. In some ways, this has been our most sacred and inviolable law: thou shalt do whatever the hells the Arameri say. For this to change… well, that’s more frightening to most of us than any shenanigans the gods might pull.”

The changing edicts from the Arameri have left many confused and adrift, no longer trusting the change in their daily routines (Itempas, after all, was also god of order). Another major change to life in the city is the return of the ‘godlings’ – children of the Three. Their interactions with humans is a central part of the novel, and through Oree we get a sense of their lives among the mortals – their whims and desires, their follies and fantasies. They’re a fascinating addition to the world, and each has their own aspect or affinity that dictates, in part, what their lives are. There were a handful of godlings in The Hundred Thousand Kingdoms, but in the time that has passed since then, the godlings have been allowed back into the world, where before they were restricted to higher plains.

Once again, I love what Jemisin has done with the ‘gods-walk-among-us’ theme, the different levels of god-hood, and how they interact with human society. The ‘godlings’, the children of the Three primary gods, each have a characteristic or affinity based around their nature. For example, in one of Oree’s flashbacks to her early years in the city, she is followed by a mercy godling, because she was drawn to the potential of Oree’s death that day. Madding, Oree’s godling friend has an affinity for checks and balances, which makes him a surprisingly successful businessman.

Oree’s guest, who she christens ‘Shiny’, is a complete puzzle to her – one she tolerates and has more-or-less given up trying to understand. Her strange gift allows her to see magic, but nothing else, and Shiny has unusual qualities that are only slowly revealed to her. When this revelation comes, I must say she takes it surprisingly well (just as she does a revelation about herself). As mentioned in the book’s synopsis, Shiny glows magically at dawn and sometimes during the day – he is not a godling, but neither is he human. He is something so much more, and throughout the novel he struggles with his nature and the curse he suffers. He very slowly opens up to Oree, as she gets sucked deeper into conspiracy that surrounds the dead godlings, and eventually develops a wary affection for her.

It took only a short while to sink back into Jemisin’s world, and the pacing of the plot grabbed my attention almost immediately. Once again, the novel starts rather choppily, hopping about a little before settling down into the narrative and plot (although, this happens far quicker than in the previous novel). We are quickly introduced to Oree, her life, and her friends, and we feel at home with this cast of interesting, well-rounded and, in many cases, unique characters after just a few pages. She is a blind artist who came to the city after Itempas’s fall, making a meagre living from a stall on a street frequented by pilgrims and staffed by other street artists. Her innate kindness caused her to take Shiny in to her home, care for him and tolerate his mute, fatally clumsy existence. She doesn’t know what or who he is, and frequently finds his taciturn nature frustrating.

The story of The Broken Kingdoms reveals itself within a couple of short paragraphs, quicker than Hundred Thousand Kingdoms, and this makes for a more streamlined (though no-less-satisfying) plot. I don’t think it’s necessary to read Hundred Thousand Kingdoms before reading this, but you would certainly get far more out of this novel (not to mention a whole other enjoyable novel) if you read them both. Oree’s navigation of the conspiracy she gets dragged into, and Shiny’s attempts to come to grips with his new nature and life are brilliantly brought to life on the page, and while Jemisin can sometimes wander into some pretty weird magic, the novel never feels too alien to relate to.

The Broken Kingdoms is not quite as complex as Hundred Thousand Kingdoms, but this can be expected from a second novel in a series. I do wish there had been a little more world-building, or perhaps an alternative perspective to fill in gaps that Oree’s blindness could not, to round out our picture of the lower levels of society. That being said, I think this could seriously have ruined the brisk pace of the novel if it hadn’t been executed properly – so it’s a mixed blessing, I suppose. The author’s style is great: never getting bogged down in exposition, frequently dropping tantalising hints of what is to come, and populating her world with varied and three-dimensional people and creatures.

A novel of compassion, revenge, dislocation and remorse, written on a background of momentous change, Oree’s journey is tough yet she manages to not only survive but grow stronger for it.

Jemisin has once again produced an excellent, layered fantasy novel that stands out from contemporary peers, and deserves your full, undivided attention.

[I have done my utmost to avoid including spoilers for either novel, which has left the novel somewhat difficult to review. There’s a lot more one can say about The Broken Kingdoms – particularly about Shiny and his evolving relationship with Oree and the godlings – but I left it out because I don’t want to spoil the story for anyone. I hope, however, that the review still piques your interest in the novel and series.]