I wrote a post a little while back highlighting some upcoming books from Tor/Macmillan that had caught my attention, one of which was Douglas Hulick’s Among Thieves, the first in his Tales of the Kin series.

At the time, I only had the synopsis:

Among Thieves follows the morally ambiguous Drothe. He’s a Nose, an informant who finds and takes care of trouble inside the criminal organization he's a part of.

When his boss sends him to Ten Ways to track down who's been leaning on his organization's people, Drothe discovers hints of a much bigger mystery. Someone is trying to stir up trouble between the lower-level criminal gangs. And there's a book rumoured to contain forbidden Imperial magic that a lot of very dangerous people seem to be looking for - including two very powerful crime bosses known as the Gray Princes. When Drothe discovers the book, he finds himself holding a bit of swag that can bring down emperors, shatter the criminal underworld, and unlock forbidden magic…

Now, however, the artwork has been revealed! And here it is, for your viewing pleasure: 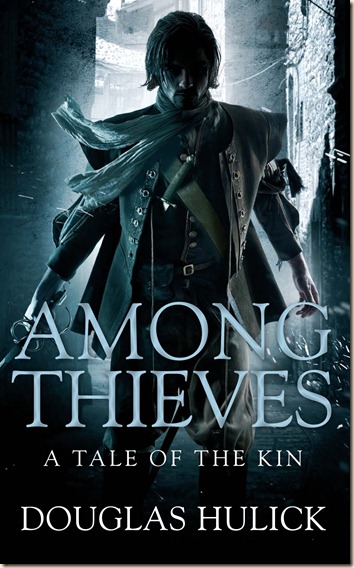 Personally, I think it’s pretty cool. Sure, it has many of the elements that have come to define almost all new fantasy novels (man in shadows, a sword, dark tones, and even – for those who’ve read and liked Stuff White People Like – a fancy, flowing scarf), but I really like it.

If the cover is not enough to whet your appetite, here’s what bestselling author Brent Weeks (a favourite of mine) had to say about the novel:

For me, this is one of the most eagerly anticipated novels of 2011 (along with the sequel to Col Buchanan’s Farlander).

I wonder who I could bribe for an early copy…