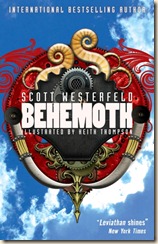 Deryn is a girl posing as a boy in the British Air Service, and Alek is the heir to an empire posing as a commoner. Finally together aboard the airship Leviathan, they hope to bring the war to a halt. But when disaster strikes the Leviathan’s peacekeeping mission, they find themselves alone and hunted in enemy territory.

Alek and Deryn will need great skill, new allies, and brave hearts to face what’s ahead.

In the world of the Leviathan trilogy, the discoveries of Charles Darwin resulted in a technological as well as scientific revolution. By 1914, ‘Darwinist’ countries (Britain and its allies) have developed ‘fabricated’ creatures, which perform the functions usually fulfilled by machines: giant jellyfish are one-man aircrafts, tiny lizards relay messages in human voices, and bats that eat prunes embedded with metal spikes are used instead of guns. In the countries that reject Darwinist practices, or ‘Clankers’, purely mechanical technology has evolved very differently from our own, designed to compete with and (with the prospect of the First World War) to defeat, Darwinist creatures.

Westerfeld introduced this world in Leviathan (published in 2009), through the eyes of Deryn Sharp and Alek Hapsburg and the British airship (and self-sustaining ecosystem) ‘Leviathan’. Leviathan combines great characters and plotting with a truly masterful piece of world-building. Westerfeld creates his alternate history brilliantly, working within and against conflicts and concerns of our history to build his own. His world-building is thoughtful, detailed, and frequently playful (one of my favourite details from the novel is the image of 1914 London renowned for its air quality because of its use of fabricated creatures instead of fuel-burning machines). I thoroughly enjoyed Leviathan, and was very excited to read Behemoth, which continues Deryn and Alek’s story in fine form.

Behemoth picks up where Leviathan left off, with Deryn and Alek together on the Leviathan. Very quickly, however, both leave the safety of the airship, and follow separate paths into the exotic and politically unstable city of Istanbul. In addition to steampunk alternate history and adventure tale, the Leviathan trilogy is a coming-of-age story, for both Alek and Deryn. In Behemoth, both characters are forced to act and think independently, and as each is separated from the adults who have hitherto protected and guided them, we see both characters mature while they face tests to their judgement, strength, and ingenuity. Repeatedly, both Deryn and Alek must decide whom to trust, attempting to accomplish their goals without compromising their safety; as the story progresses, what becomes apparent is that the most important of these decisions will be to trust each other.

As in Leviathan, Westerfeld does a great job of using real-world events and conflicts to construct his narrative. In this case, Winston Churchill’s refusal to hand over a warship purchased by the Ottoman Empire (to which Westerfeld adds an accompanying fabricated creature, the titular behemoth), becomes a diplomatic crisis not only for Britain, but for the allied Darwinists who want to sway Turkey away from its Clanker sympathies. Westerfeld is very skilled at balancing the various elements of his plot, raising the stakes individually for Deryn and Alek, and the broader political situation at hand without any element of his story overpowering another; moreover, he does so in a narrative that is fast-paced, engaging, and above all, fun.

I really enjoyed seeing the world of Leviathan extended beyond the specifically Clanker or Darwinist worlds of Austria and Britain. In addition to showing a different, slightly more organic version of Clanker technology in Istanbul, Westerfeld introduces his first North American to the story: Eddie Malone, an American reporter. Americans seem to take a much more relaxed attitude than any other characters, comfortable with both machines and fabricated creatures. Eddie was one of my favourite new characters. The perspicacious, monkey-like loris named Bovril was also an amusing addition to the cast, showing an ability to pick out the most important (and, frequently, the most awkward or embarrassing) words and phrases from conversation and repeat them. The loris will clearly play an important role in the final book of the trilogy, but how is as yet unclear. Manipulated into Alek’s care by Dr. Barlow, all it seems to do at present is threaten to make trouble.

Behemoth is an excellent read, featuring a fun and suspenseful plot within brilliantly-realised alternate history. Keith Thompson’s illustrations are a great addition to the book – they do a good job of capturing the spirit of Westerfeld’s story and characters. I am definitely looking forward to Goliath.

Posted by Civilian Reader at 6:01 PM