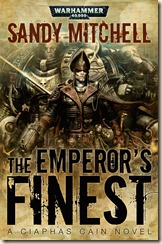 Commissar Cain is called to duty once more, saving a governor’s daughter from a planet over-run by rebels. The uprising hides something far more sinister however…

The search for the source of the alien threat leads Cain to a drifting space hulk – a far safer place than beside the obsessed governor’s daughter.

But when the Reclaimer Space Marines suffer devastating losses at the hands of the Great Devourer, Cain and his trusty aide Jurgen must go it alone. With the tyranids waking and a group of stow away orks on the loose, there are no safe places to run or hide, and Cain must use all his ingenuity and cunning to escape the space hulk alive.

It’s been a while since I read a Ciaphas Cain novel (I think the last one was The Traitor’s Hand), but reading The Emperor’s Finest I was quickly reminded of how much I enjoyed this slightly unorthodox Warhammer 40,000 series.

The novel’s plot takes a little while to really get going, but we are immediately re-introduced to Cain and his particular way of looking at things (i.e. self-involved). Once Cain and the Reclaimers Space Marines he is accompanying arrive on Viridia – an agri-world currently in the throes of a widespread, violent uprising – they are quickly thrown into action as Cain inadvertently volunteers for a search-and-destroy mission. In the process of executing this mission, he is introduced to Mira, the governor’s daughter, who irritates Cain from the very first moment he sees her (their relationship develops as the novel progresses, not always for the better). His first mission also reveals the depths of the conspiracy tearing Viridia apart, plunging Cain into an even deadlier mission with the Reclaimers, as they hunt a Space Hulk.

From the tunnels below and war-ravaged streets of Viridia, to the corridors of the Space Marine vessel and the Space Hulk, the various atmospheres (of menace, tension, and also pious calm) are well-realised on the page, and because the action is never far away it is very difficult to get impatient with the story. Mitchell is very adept at writing battle scenes and skirmishes, and Cain’s perspective offers something new and different from the usual perspective of devout and heroic warriors that make up many of the Black Library’s WH40k novels. Cain’s thoughts on those around him are often amusing and usually critical or sarcastic – something he could not get away with out loud, and something not often evinced by other protagonists in WH40k novels, who tend less towards the sarcastic and self-involved or outright selfish.

As Cain travels through Viridia in the aftermath of the initial Reclaimers assault, we get an impression of the city and those posted to defend it – not to mention the psychological impact (i.e. heightened paranoia and suspicion) a genestealer uprising can instil in loyalists. We also get a look at Cain’s approach to his job – which is quite different from the commissars portrayed in the gaming literature (basically trigger-happy zealots as likely to put a bullet in a friendly for insubordination or some other minor infraction as they are to shoot the enemy). Like Black Library’s other famous commissar, Ibram Gaunt, Cain is from the more measured school: he believes in the importance and efficacy of kind words and encouragement, in addition to stern orders and rule of law. His heroic, “fraudulent” (his words) reputation helps make his magnanimity appear sincere and noble, rather than the necessary self-preservation tactic he views it to be (many commissars have... fallen in battle, early in their careers…).

Unusually, in my opinion, Mitchell’s battle/action scenes are better than the calmer inter-battle scenes, which I normally prefer in other novels (particularly those by Dan Abnett and Aaron Dembski-Bowden). Mitchell does still pay attention to character development, of course, and the whole cast is well-drawn; but his real strength lies in the quick-paced action sequences, with Mitchell’s prose pulling you along perfectly. For those new to the series, the ‘edited-memoir’ form the novels take is rather handy – Inquisitor Amberley Vail’s footnotes offer background details, amusing asides and critiques of Cain’s statements, as well as chronological context, without ruining the flow of the novel. The inclusion of Vail’s footnotes allows for an extra narrative take on Cain’s memoirs – we get complaints about Cain’s “cavalier approach to chronology”, Vail’s clear dislike (or, at minimum, disrespect) of Mira, and also commentary on Cain’s more cowardly or self-preservational comments.

The author has said that Cain is based loosely on the characters of George MacDonald Fraser’s Harry Flashman and Edmund Blackadder, and you can certainly see the same self-interested, hide-saving tendencies of these two anti-heroes in Ciaphas Cain. However, Cain is actually rather adept and skilled in the arts of warfare (otherwise he would have been dead long ago), in addition to his prodigious luck, which makes these novels action-packed as well as amusing diversions. That Mitchell has managed to maintain the momentum over seven novels and five short stories is laudatory, and bodes well for the future adventures of Commissar Cain.

While this is not the best series published by Black Library, it offers a fast-paced and entertaining read for fans of the Warhammer 40,000 universe. The Emperor’s Finest is also one of the better novels in the series – far more streamlined and expertly crafted than some of his other novels (particularly the Inquisition novels he’s written, which dragged just a little more than I would have liked). With the Ciaphas Cain series, Mitchell does not delve too deeply into the psyches and motives of his characters, and is far more intent on providing a fun, fast-paced, and plot-driven story to entertain his audience. He succeeds.

If you’re looking for a novel set in the Warhammer 40,000 universe that is a little more tongue-in-cheek, a little more subversive, and slightly unconventional, then any of the Ciaphas Cain novels should appeal. The Emperor’s Finest continues the series in fine form, and was both entertaining and well-written. 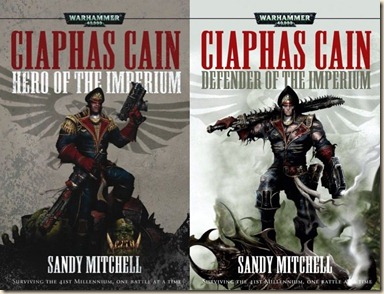 - Hero of the Imperium (includes: For the Emperor, Caves of Ice, The Traitor’s Hand + three short stories: The Beguiling, Fight or Flight & Echoes of the Tomb)

Posted by Civilian Reader at 4:34 PM