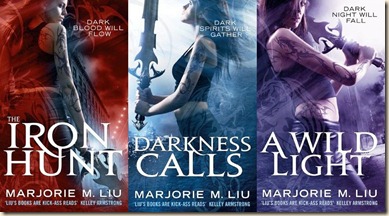 Daemons and Mystical Tattoos… a new voice in Urban Fantasy

During the day, Maxine’s tattoos are her armour and she is invincible. At night they peel from her skin to take on forms of their own, leaving her human and vulnerable, and revealing themselves to be demons sleeping beneath her skin. But these demons are the best friends and bodyguards a woman could have. And Maxine needs bodyguards. She is the last in a line of women with power in their blood, trained to keep the world safe from malignant beings who would do us harm.

Nomad born and bred, demon hunter Maxine Kiss has always relied upon herself to fight the darkness that surrounds her, and the predators – human, zombie and otherwise – who threaten the earth.

Ten thousand years after its creation, the prison dimension that kept the worst of these from us is failing, and all the Wardens save Maxine are dead. She must bear the burden of her bloodline and join the last wild hunt against the enemy.

The Hunter’s Kiss series has a premise with great potential – tattoos that come to life at night, demons who keep their host (‘canvas’?) company and protect her in her vulnerable state. Unfortunately, however, I didn’t feel that this series quite fulfilled its promise.  This should have been epic – and it certainly tries to be – but the books are simply too short to accommodate fully the sweep of events Liu attempts to pack into them.

This is a pity because the author’s writing isn’t bad at all; but, with no space for a proper back story and exploration of the characters, I found the characterisation a little thin, and I didn’t find myself able to identify with the protagonist.

These are novels that are packed with action, and you expect the story to move quickly, but here the plot races on without giving the reader much chance to digest any information or gain any full understanding of events and characters. There are several points where history is tantalisingly hinted at or seen, particularly in the third book, but we are not granted a pause to examine in any depth motive, cause and effect, thereby denying us the chance to properly identify with and understand Maxine, Grant (love-interest), Jack (Maxine’s grandfather) and who or why they are the way they are. The bits of back story we do get are thrown in almost as an afterthought, and too much is withheld. Rather than leaving the reader in pleasurable suspense, it leaves you slightly frustrated.

Compared with other Urban- and High fantasy series, such as the True Blood series by Charlaine Harris, or the novels of Garth Nix, the Hunter’s Kiss trilogy felt unfinished, almost rushed, with too many blanks unfilled and questions left unanswered.

With plot twists that are a little too predictable, and enemies who are more caricature of evil villains, the series didn’t quite live up to all that it promised. The series isn’t dreadful, by any means, but overall this series just didn’t do it for me, though as a bit of light reading on the morning commute it served its purpose more than adequately. Overall, then, the series needed fleshing out a bit more, in order to give it broader appeal and live up to its epic potential.