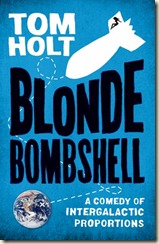 The woman who has it all, including an explosive personality

The year is 2017. Lucy Pavlov is the CEO of PavSoft Industries, home of a revolutionary operating system that every computer in the world runs on. Her personal wealth is immeasurable, her intelligence is unfathomable, and she’s been voted ‘Most Beautiful Woman’ for three years running. To put it simply – she has it all.

One thing, however, is not quite right in Lucy’s life. She doesn’t realize it yet, but she is in fact a bomb.

And not just any old bomb. Lucy is a very big, and very smart bomb, and her mission is to blow up the planet known as Earth.

In classic Tom Holt style, little of the plot of this brilliant novel makes any sense… All of his novels have plots that are quite zany, as he throws in Douglas Adams-esque strangeness. And, as with all the best of his work, it just doesn’t matter.

Canine aliens are going mad from pop music arriving at their planet from another world, ours. The solution? To bomb ‘Dirt’ (their name for Earth). So, they send a smart bomb – a very, very, very smart bomb. A sentient bomb in fact.

Arriving in orbit, confronted with no planetary defences whatsoever, the bomb is forced to make some decisions. Throw in a genius computer programmer, sentient languages, bank robbery by teleport, and the alien abduction of a small boy’s pet, and the world gets just that little bit loonier.

It is very difficult to review Blonde Bombshell without giving away some of the best gags, so take my word for it and give it a go.

Thanks to great writing, and a fun plot, I loved this book.

Posted by Civilian Reader at 9:07 PM