“The Confession”, by John Grisham (Century) 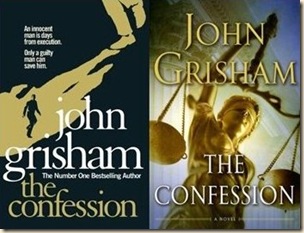 An innocent man is days from execution. Only a guilty man can save him.

Travis Boyette is a murderer. In 1998, in the small East Texas city of Sloan, he abducted, raped, and strangled a popular high-school cheerleader. He buried her body so that it would never be found, then watched and waited as police and prosecutors arrested Donte Drumm, a local football star with no connection to the crime. Tried, convicted and sentenced, Drumm was sent to death row: his fate had been decided.

Nine years later, Donte Drumm is four days from execution. Over 400 miles away in Kansas, Travis faces a fate of his own: an inoperable brain tumour will soon deliver the end. Reflecting on his miserable life, he decides to do what’s right. After years of silence he is ready to confess.

But how can a guilty man convince lawyers, judges and politicians that they’re about to execute an innocent man?

Each new Grisham novel is an event, and it was with considerable anticipation that I bought The Confession. After the slightly disappointing The Associate I was somewhat anxious that the author had lost his touch, but as I quickly discovered, this couldn’t be further from the truth. The Confession is classic Grisham, and I was quickly swept up by the narrative, getting through the novel in two short and one very long sitting (insomnia can sometimes have its benefits…).

Boyette’s confession to Keith Schroeder, a Kansas Lutheran pastor, happens within a mere handful of pages, as the terminally ill career-sex-offender walks into the minister’s office and confesses that Donte Drumm has been wrongly convicted of murder. The title’s confession is, however, two-fold –it also refers to Drumm’s confession, which was obtained after twelve hours of cruel and deceitful interrogation by a small cadre of thuggish cops, and is widely accepted as the sole reason he was convicted and received the death penalty, not to mention the reason his appeals have been routinely rejected. It’s difficult not to feel angry with both Boyette for his cowardice, dithering and generally repugnant character, and also the racist cops and the broken criminal justice system portrayed in the novels.

There are some elements to the novel that many might consider tired tropes of American crime/legal fiction. For example, it’s set in Texas, and the subject is a wrongly-accused African-American convicted of killing a white cheerleader – this is hardly an original backdrop for a novel (Grisham himself used a similar plotline in A Time To Kill). What makes Grisham’s novel so much more than others, is what he does with this plot, and the story he weaves around it.

Robbie Flak, Drumm’s slightly-crazy, driven lawyer, is a great character. After an already highly colourful career storming every barn and fighting every case he could involving any kind of social-injustice he perceived, he has spent the last nine years defending Drumm, attempting every avenue available to him to exonerate his client. Keith Schroeder, the minister Boyette turns to for help and guidance, plays a bigger role, and Grisham gives him a good amount of personal struggle as he decides on whether or not to help Boyette break his parole in order to remedy an ever greater injustice. Drumm, also, is a complex character, resigned to his fate and broken down by the system that has utterly failed him.

This novel starts with much more bang than Grisham’s previous novel (see my review of that, here). From the opening chapter with Boyette and the minister, not to mention the chapter that introduces us to Flak and his colourful career, Grisham appears to be back to his best. I was hooked immediately, and as the author gave us more and more information and background on the arrest, coerced confession, the case and eventual sentencing, I was on tenterhooks, eager to just keep reading and find out if Boyette, Schroeder and Flak were able to stop the execution.

Along with the thriller tale, The Confession is a passionate, intelligent (if narrow-in-scope) indictment of the death penalty in the United States (see also: The Chamber), and Grisham delves into every facet of this issue – managing not to preach, while giving the reader plenty of grist for the mill. One particularly good scene is about the cost of death penalty cases, and one of the ironies of Texas: pro-death penalty but notably anti-tax, most Texans have no clue how much a capital case actually costs them in taxpayer money: $400,000 is the estimated pay received by the fictional team, but from start-to-finish, it apparently costs $2million to execute someone in Texas, compared to $30,000 per year for life imprisonment. It does present a rather fiscally-conservative option. (The author’s note at the end of the novel does admit that there may be some slight flaws or errors in the numbers.)

The bluntest indictment (in a scene that already overflows with contempt for the practice and the Texas system) comes from a quietly fatalistic Drumm, on the morning of his scheduled day of execution:

“There’s nothing we can do. When Texas wants to kill somebody, they’re gonna do it. Killed one last week. Got another planned later this month. It’s an assembly line around here, can’t nobody stop it. You might get lucky and get a stay every now and then... but sooner or later your time is up. They don’t care about guilt or innocence... all they care about it showing the world how tough they are. Texas don’t fool around. Don't mess with Texas.”

The metaphor of it being an “assembly line” puts me in mind of the darker ‘jokes’ about George W. Bush’s tenure as Governor of Texas, when there were so many executions that they brought in an electric-couch, rather than -chair, to get things moving quicker. Governor Newton of this novel is portrayed as a cold, heartless bastard only concerned with his future political plans, uninterested in justice and focussed only on his own, narrow self-interests.

A masterful storyteller, Grisham is unafraid to wrench the carpet out from under his readers. This is not an easy read, and it’s not happy. It’s a harsh, passionate indictment of capital punishment. It’s an imperfect argument, but recognises itself as such – something that pro-death penalty lobbyists seem incapable of doing for their own side of the argument. Once again, Grisham is able to take such an important, divisive issue and lay it bare, unafraid of the effect it will have on the reader, all the while wrapping it in a gripping, edge-of-your-seat thriller.

I’m not often moved by novels, certainly not recent/modern ones you’d find on “popular fiction” shelves, but this novel certainly did move me, as I became quite invested in Drumm’s fate. The pacing of the plot ensures this, as do the forces arrayed against him. I can’t imagine anyone coming away from reading this novel unaffected.

The pacing of the final quarter of the novel dropped a bit, as Grisham tied up loose ends and brought events to a close – allowing, of course, for more cynical and damning portrayals of politicians and the Texan political process. After the emotional rollercoaster of the first 75% of the novel, this was a little disappointing, but it remained an enjoyable read.

In a year when I haven’t been much moved or taken by new thrillers, The Confession stands out as one of the best novels of the year, certainly in this genre, and one of the author’s best novels.

Brilliant, gripping, superbly written, this is classic Grisham and can stand proudly with the best of his novels.