“The Name of the Wind”, by Patrick Rothfuss (Gollancz) 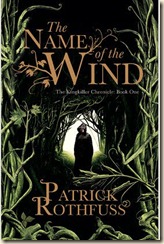 “I have stolen princesses back from sleeping barrow kings. I burned down the town of Trebon. I have spent the night with Felurian and left with both my sanity and my life. I was expelled from the University at a younger age than most people are allowed in. I tread paths by moonlight that others fear to speak of during day. I have talked to Gods, loved women, and written songs that make the minstrels weep. My name is Kvothe. You may have heard of me…”

So begins the tale of Kvothe – currently known as Kote, the unassuming innkeeper – from his childhood in a troupe of travelling players, through his years spent as a near-feral orphan in a crime-riddled city, to his daringly brazen yet successful bid to enter a difficult and dangerous school of magic.

In these pages you will come to know Kvothe the notorious magician, the accomplished thief, the masterful musician, the dragon-slayer, the legend-hunter, the lover, the thief and the infamous assassin.

So, I know this has been out for quite a while, but I found a gap in my schedule and decided that I no longer wanted to put off reading The Name of the Wind. Rothfuss’s debut has received such a considerable amount of praise from seemingly the whole book reading, reviewing, and writing communities, and I wanted to see what all the fuss was about. Needless to say, much of the praise is justified, and every fantasy reader worth his or her salt should read Rothfuss’s  debut.

It’s not clear for a while what the novel actually is meant to be, or what the plot of this first instalment is meant to achieve (the synopsis makes it sound like it might be a lot more action-packed than it actually is). The opening handful of chapters do not reveal much of what we should expect, so it took a while longer to sink into The Name of the Wind than I would have liked. This is both a good and not-so-good thing. I wasn’t sure what I should be paying attention to, or what was wholly relevant or an aside. This does become apparent, of course. The story really picks up – as Kvothe admits, himself – when he arrives in Tarbean, still young and alone, utterly unused to the harsh life of a street kid (this period, actually, could have been expanded as I thought it a bit short or even rushed). When he moves on to the University (which forms the bulk of the novel), I found myself completely immersed in the story, and Rothfuss’s magic system – understated and elegant – is brilliantly created and portrayed. His time at university is pivotal, as he experiences both the taste of being a hero as well as being on the receiving end of a bitter, deadly vendetta.

It’s not all perfect. Kvothe’s interactions with Denna, the love interest of the novel, can be a bit off. Even though he freely admits that he is ignorant when it comes to how to act around and speak to women, this is more than that. In one exchange late in the novel, their dialogue feels a little stilted and unnatural. There’s one long passage that was a questionable decision: it’s written mostly in dialect-dialogue, which went on for too many pages, and suffered the same fate of all such passages (it seemed to be a mix of Scottish, Irish and English country yokel accents, and was a little annoying).

Otherwise, however, the dialogue throughout the novel, with all the other characters, is spot on and realistic – often very amusing. The amount of attention Rothfuss has paid to making his characters as complete as possible is impressive – even minor characters are brilliantly realised on the page and we get a real sense of their personalities.

Ultimately, The Name of the Wind is a story about people; their intentions, graces and faults. There are plenty of classic plot-elements (retribution, overcoming adversity, self-discovery, and so forth). Kvothe struggles with his harsh introduction to human nature, especially the darker parts of it, after he leaves the comfortable family-atmosphere of his travelling troupe. Some of those around him take advantage of his innocence – particularly at the university, where he struggles to overcome his poverty in order to remain enrolled for his studies. Ambrose Jakis, an elder student who works at the vast university Archives, is particularly devious and dastardly. But, at the same time, Kvothe experiences a few considerable kindnesses, and performs some of his own, in redemptive examples of human nature.

Rothfuss writes wonderful prose that will ensnare you, but this is not a break-neck pace novel. In fact, it’s very much the opposite – the novel is languid, the events unfold at a steady pace, and Rothfuss is in no hurry to show or tell us everything.

For me, the greatest strength of Rothfuss’s writing is how it made me want to keep reading the novel. When I started, I was very much in an Impatient-Reader-Mood, when I want something quick and fun to read, something that sweeps you up and drags you along. After initial concerns of the slower pace of The Name of the Wind, I found that I was still reading hours after picking up the book each time, and that I wasn’t impatient any more. In fact, I was perfectly comfortable allowing myself to sink into the narrative and Kvothe’s tale. I’m not sure if this effect has a specific name, but it was calming and utterly engrossing. The novel is still slower than I would normally like: Rothfuss doesn’t have Scott Lynch’s gift for maintaining an addictive, brisk pace for 500+ pages, but then this is a very different type of fantasy.

This is a great fantasy-literary achievement, one that is wholly satisfying and enjoyable. The world-building is superb (and part of the reason the novel is quite slow) and Tolkien-esque in scope and detail – Rothfuss is creating a fully-realised world, and some events that might seem extraneous or superfluous to the plot crop up again later to complete the picture. In order to broaden our understanding of the world, we get a number of stories-within-a-story, as Kvothe recalls a particular tale or song he was told in his youth. It’s a good way to inform the reader, and prevents the novel from suffering from an abundance of ‘info-dumps’. It’s clear the author has an interest in how fairy tales, myths and legends grow out of reality and snippets of information, filtered through the human propensity for embroidery and embellishment, and he incorporates this expertly into and throughout the novel.

Now that the final manuscript of the sequel, The Wise Man’s Fear, has been delivered to the publisher (out in March 2011, last time I checked), I am very eager to read what happens next. By the end of The Name of the Wind, you will be highly invested in Kvothe’s tale and, despite the novel’s slow pace and considerable world-building, you will be eager for much more. Hopefully, I’ll get to A Wise Man’s Fear much quicker than I did Rothfuss’s debut – it promises to be far more impressive and exciting than this debut.

Some may consider it fantasy heresy, but I think Rothfuss is better than Tolkien: he is more interested in characterisation and the overall tale, than the academic exercise of creating a massive world. His characters are flawed and realistic, his prose fluid and engaging.

Very highly recommended, this is a must-read for all fans of fantasy, and certainly for anyone who likes their fantasy detailed yet painted on a broad canvas with exceptional skill, populated by fully-realised, complex and interesting characters.

Posted by Civilian Reader at 10:01 PM