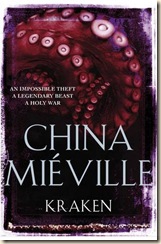 An impossible theft. A legendary beast. A Holy War.

Deep in the research wing of the Natural History Museum is a prize specimen, something that comes along much less often than once in a lifetime: a perfect, and perfectly preserved, giant squid. But what does it mean when the creature suddenly and impossibly disappears?

For curator Billy Harrow it’s the start of a headlong pitch into a London of warring cults, surreal magic, apostates and assassins. It might just be that the creature he’s been preserving is more than a biological rarity: there are those who are sure it’s a god.

A god that someone is hoping will end the world.

Approaching China Miévelle’s Kraken at this point (after months of hardback reviews, and then more paperback reviews) is a rather daunting affair – both as a reader and reviewer. The list of praise and encomiums both in the paperback edition of the novel, as well as listed on the Amazon page, makes me wonder what on earth I could add to the discussion; the comparisons to literary figures and movements leaves me overwhelmed (having stopped studying English literature at aged 16) and intimidated. As a reader, if I don’t love it, I feel somewhat deficient.

I don’t have the most extensive experience with Miéville’s work – I read Perdido Street Station nine years ago (I found it quite heavy-going and not the easiest read), and I’ve also read The Scar twice (which I really enjoyed). Each time a new novel has been published, though, I’ve hesitated or been distracted by something else.

So is this a review or not? Well, no, not quite…

Reading Kraken, it is clear that Miéville’s prowess as an author has grown considerably since I read The Scar – his prose is superb, the flow of his story near-flawless; his characters are brilliantly realised and also realistic; the dialogue natural; his evocation of London (both real and fictional) is brilliant; the weirdness he puts in his novels delightfully twisted and original.

For me, however (and unfortunately), the novel didn’t grab me as much as it perhaps should. For starters, I have never been much of a fan of this genre, and the setting of an alternative London has never much appealed – largely because my experiences with the city are extremely limited, so I guess I can’t relate too well, and I simply don’t like London. This aversion to London-based novels (fantasy or otherwise) is not limited to Miéville’s novels – I couldn’t get into Neil Gaiman’s Neverwhere, Michael Shevdon’s Sixty-One Nails, or Kate Griffin’s Midnight Mayor. If you are a fan of any of these novels, then China Miéville’s Kraken and The City & The City will be perfect reads for you. However, for me, I just didn’t connect with the setting despite my appreciation for the authors’ talents as writers and storytellers.

Reading the first few chapters of Kraken, it is clear to me that the praise for Miéville’s writing and prose is entirely warranted, and it was impossible to not be impressed. He just happens to be writing in a genre that simply doesn’t appeal to me, no matter how many times I try to read a novel in it. The author’s imagination seems limitless, weird, darkly attractive, and his ability to transfer it on to the page is nearly peerless. But, despite my appreciation for his abilities and authorial skill, I just couldn’t get into the novel.

For me, Kraken just didn’t resonate. But, as a work of fantasy, it’s impossible to not recognise the author’s achievement and skill, not to mention why he’s won the Arthur C. Clarke award three times.

[Emma is going to give Kraken a try, and if she gets a chance, she’ll write a review of it, too.]