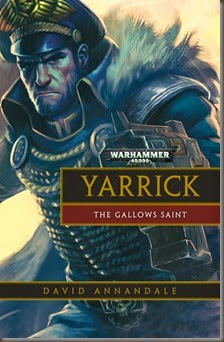 Fresh from his victory against traitors on Mistral, Commissar Yarrick deploys to Abydos to watch a great triumph in honour of the forces who liberated the world from the grip of the alien tau. But when the planet’s governor is assassinated, Yarrick is drawn into a political game with deadly consequences for himself, his Steel Legion troops and Abydos itself. Can he unravel the mystery and reveal the true traitors on the world before it is too late?

Continuing his series detailing the career of Commissar Yarrick, Annandale here offers a short tale set after the conclusion of a conflict. On a world recently ‘saved’ from the influence of the Tau, Yarrick stumbles across a mundane, rather parochial conspiracy. The story moves very fast. This was not necessarily a bad thing, but I think it certainly would have benefited from expansion – as it stands, the story is a bit of a whirlwind, and Yarrick’s investigation is executed pretty much by luck and accident. True, there’s no reason to believe such a case could never happen. I think I was just greedy for a longer, more in-depth tale. Luckily, I have the first full-length Yarrick novel (Imperial Creed) to read, which I will be reading ASAP. (I know, I say that a lot.)

Despite this minor complaint, this is a very good story – Annandale continues to improve as a writer, and writes great stories. Let’s hope there are many more from him. 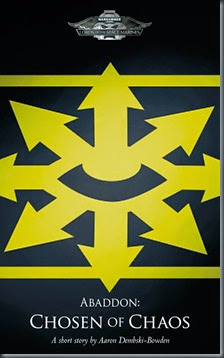 In the aftermath of battle, a group of Black Legion warlords – traitors to mankind, drawn from across the Legions of Chaos and sworn to the Warmaster – torture a prisoner, a captain of the Space Marines. Defiant to the last, the son of the Emperor is prepared to die, his duty fulfilled. But Abaddon, the Chosen of Chaos, has other plans for this brave warrior…

A very short story, introducing the post-Horus Heresy Abaddon: master of the Black Legion, and Warmaster of the Traitor Astartes, he has taken over from the slain Horus to wage his eternal war on the forces of the Imperium. This story, while very good, doesn’t really do anything, which was slightly frustrating. As an amuse bouche for Abaddon: Talon of Horus, however, it works very well indeed. As long-time readers of the blog will know, I’m a huge fan of Dembski-Bowden’s novels and writing, and Chosen of Chaos shows everything I’ve come to love about the way he writes. Only… not enough of it to be satisfying. I would, therefore, recommend you read this only when you don’t have a long wait until Talon of Horus. 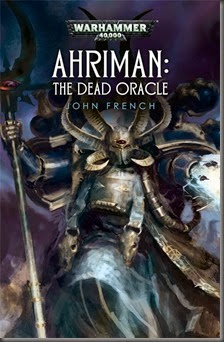 Ctesias, an ancient Space Marine and former prisoner of Amon of the Thousand Sons, tells the tale of one of the events that led him to his destiny. After Amon’s demise, Ctesias comes into the service of Ahriman, the exiled First Captain of the broken Legion, and is given power undreamed of – and drawn into a plot involving the otherworldly daemons of the warp, the machinations of Ahriman and the mysterious dead oracle.

This is set after the events of Ahriman: Exile, the first novel in French’s series focusing on the Thousand Sons’ greatest sorcerer. It is not, however, essential to have read Exile in order to follow or enjoy The Dead Oracle – I have yet to read the novel, but I really enjoyed this story. In fact, of these three stories reviewed here, this is by far my favourite. I think French has done a great job with Ahriman, painting him as a rather withdrawn, highly-focused and competent sorcerer, attempting to atone for and remedy what he has wrought on his Legion. The story isn’t from Ahriman’s perspective, however – rather, it is from Ctesias’s P.O.V. Through his eyes, we see how far Ahriman is prepared to go on his path to redemption. We also see just how powerful and learned he is about the way of Chaos. Not to mention how tricksy he can be, fooling even greater daemons of the Warp.

After finishing The Dead Oracle, my interest in reading Exile only grew. It has been moved up my TBR pile.

Posted by Civilian Reader at 9:23 PM