Upcoming: OF BONE AND THUNDER by Chris Evans (Gallery) 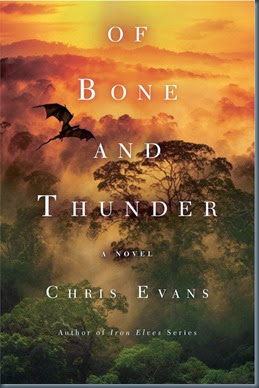 I have never read any of Chris Evans’s novels. As with so many authors, I’m not sure why. I even met him, once, in New York at a drinks event (in a very cool underground bar, in 2011). I think, however, that my unfamiliarity with his novels is about to end. Described as “Apocalypse Now meets The Lord of the Rings”, I think OF BONE AND THUNDER sounds pretty great:

Channeling the turbulent period of the Vietnam War and its ruthless pitting of ideologies, cultures, generations, and races against each other, military historian and acclaimed fantasy writer Chris Evans takes a daring new approach to the traditional world of sword and sorcery by thrusting it into a maelstrom of racial animus, drug use, rebellion, and a growing war that seems at once unwinnable and with no end in sight. In this thrilling epic, right and wrong, country and honor, freedom and sacrifice are all put to the ultimate test in the heart of a dark, bloody, otherworldly jungle.

In this strange, new world deep among the shadows under a triple-canopy jungle and plagued by dangers real and imagined, soldiers strive to fulfill a mission they don’t understand and are ill-equipped to carry out. And high above them, the heavy rush of wings slashing through the humid air herald a coming wave of death and destruction, and just possibly, salvation.

I also really like the cover – it’s not your typical fantasy cover, and does have more in common with non-speculative fiction, only with an added dragon. I think they’ve done a great job. Of Bone and Thunder is published by Gallery Books in October 2014.

Posted by Civilian Reader at 4:23 PM