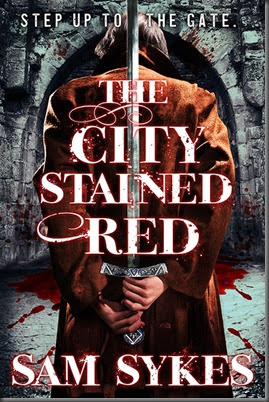 Shamelessly pinching this from Justin at Staffer’s Book Review (shameless, I say!), here’s the US cover for Sam Sykes’s upcoming fourth novel, The City Stained Red. To be published by Orbit in October 2014 (eBook) and January (print), here’s the synopsis, from the author’s website…

Every city has its secrets, every man has his demons.

The city of Cier’Djaal has grown rich from the silk its horse-sized spiders spin.  From their unimaginable wealth, the fasha ruling class built a city the likes of which legends strain to capture: spires that glitter gold in the desert sunlight, streets choked with people carrying burdens of coin and silk, a world where the differences between thieves and nobles are so small that an outsider might not even know.

A radical upstart cult has risen from the slums and sewers of the city, intent on toppling its wealthy masters and spilling their gold upon the streets for the downtrodden.  The ruling thieves’ guild has come to meet them with fire and blade, intent on preserving the rule of their own bloody law.  Foreign armies intent on conquering the city and their opportunity to use the violence as an excuse to seize the city’s vast wealth for itself.  And beneath human heels, the tribal shicts and ferocious tulwar clans seethe, waiting to strike back against the society that has trampled them underfoot.

And into this, Lenk comes seeking a new life.  A life where he can set his sword down and leave the violence of his adventuring life behind him.

But there are whispers of something darker behind the wars, a sinister hand moving pieces across a board, intent upon ushering in a new world, free of gods, of fear, of humanity.  And its gaze has just settled upon Lenk.

I read a very early draft of the novel, in 2013, and really liked it. I enjoyed the first two of Sam’s novels – Tome of the Undergates and Black Halo – and this was even better. The City Runs Red will be published in the UK by Gollancz (only, as “A…” rather than “The…”).

Posted by Civilian Reader at 1:47 AM