Upcoming: ONE NIGHT IN SIXES by Arianne “Tex” Thompson (Solaris) 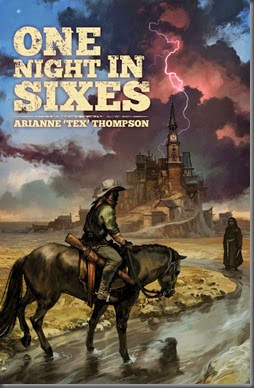 I’ve seen mentions of this novel on a number of blogs and online venues for what feels like ages. I’m intrigued to read it. It seems to be in the SFF Western sub-genre – one that I’m rather fond of, but also one in which I am woefully under-read. I’d be lying if I didn’t admit that my attention wasn’t first drawn by that cover, which I think is really cool.

One Night in Sixes is the first novel in Arianne “Tex” Thompson’s Children of the Drought series, and is published this month by Solaris Books. Here’s the synopsis…

The border town called Sixes is quiet in the heat of the day. Still, Appaloosa Elim has heard the stories about what wakes at sunset: gunslingers and shapeshifters and ancient animal gods whose human faces never outlast the daylight.

And the daylight is running out. Elim’s so-called “partner” – that lily-white lordling Sil Halfwick – has disappeared inside the old adobe walls, hell-bent on making a name for himself among Sixes’ notorious black-market traders. Elim, whose worldly station is written in the bastard browns and whites of his cow-spotted face, doesn't dare show up home without him.

If he ever wants to go home again, he’d better find his missing partner fast. But if he’s caught out after dark, Elim risks succumbing to the old and sinister truth in his own flesh – and discovering just how far he’ll go to survive the night.

Posted by Civilian Reader at 11:42 AM