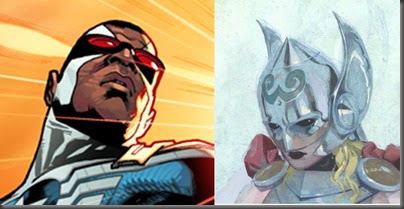 Marvel has been in the process of shaking things up, this week. Not only did they announce an all-new, female Thor on The View (see below), but they have now unveiled, yesterday on The Colbert Report, who is going to be the (all-)new Captain America!

And that lucky fellow who will now don the stars and stripes is none other than Sam Wilson, who formerly wore the mantel of the Falcon. In a nod to both his new role and his past super-heroics, his new get-up is pretty cool… 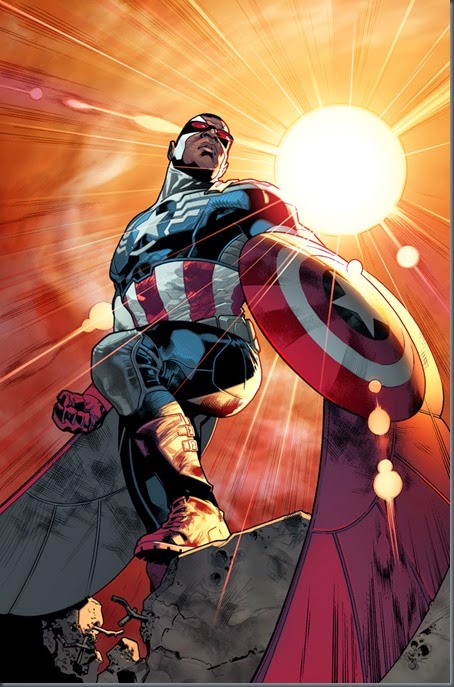 I quite like this, actually. I think this should offer something new to the character, and more so than Bucky’s turn as Captain America – although, I did really like that time in the Cap mythology. Here’s what Rick Remender, who will be writing the new series, had to say…

“Sam wants to lead by example. To help people see their own selfishness and to turn it around. To build better communities, to never forget the little guy… Sam follows his heart and his belief in what the American dream means and how it belongs to everyone.”

And here’s Executive Editor Tom Brevoort on the change-up…

“Steve’s spirit is as willing as ever, but his body is no longer up to the task of being Captain America. So he’ll employ his skills as the new Cap’s remote strategic advisor, running Cap’s missions from his headquarters in Avengers Mansion and providing Sam with technical support and field information from a distance. He’ll also tutor Sam in how to throw the shield, a skill that’s deceptively difficult for the new Cap to master. So Steve will continue to be a vital part of the series moving ahead.”

So, Steve Rogers is the new Nick Fury? Maybe just for new Sam-Cap? Sounds interesting, at any rate.

Given my tendency to wait for comic series to be collected or discounted, this means that two complete runs (or volumes) of Captain America have actually finished, that I haven’t read yet… Kind of: Rick Remender’s Marvel NOW series with Steve Rogers as Cap will end before the first issue of All New Captain America comes out in November 2014. Before that was Ed Brubaker’s second run on the series, which was (I think) part of the Golden Era or something. Marvel are re-juggling things far too frequently for me to keep up. It may look like a desperate plea for attention (certainly, in some instances it’s hard to see it as anything other than that), but it’s nice that they’re properly mixing things up. Just, you know, maybe let a series run for a full year before canning it?

Next up, the new Thor! A character I was not particularly familiar with pre-movie, as I always thought the idea of him was a little silly, compared to all of the other Avengers and Marvel characters. As a result, I have only read about him in the Avengers series, and more recently in Jason Aaron’s Marvel NOW series, Thor: God of Thunder (of which I’ve read the first collection, “The God Butcher”). I am, however, rather intrigued by this change up. Here’s the new Thor… 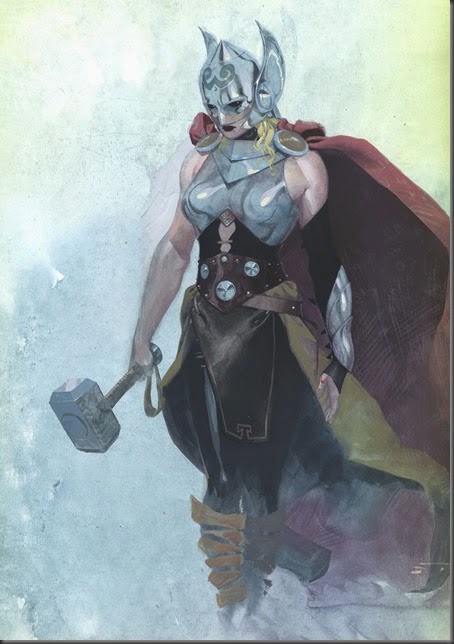 First up, that’s a great piece of art. I do love this artist’s work – I think it’s Esad Ribic (the press release didn’t say, but it’s similar in style to Ribic’s work on Thor: God of Thunder). Here’s what the press release had to say:

“No longer is the classic male hero able to hold the mighty hammer, Mjölnir, a brand new female hero will emerge will who will be worthy of the name THOR. Who is she? Where did she come from and what is her connection to Asgard and the Marvel Universe?”

Jason Aaron, who will write the new Thor series, was keen to emphasize that, “This is not She-Thor. This is not Lady Thor. This is not Thorita. This is THOR. This is the THOR of the Marvel Universe. But it’s unlike any Thor we’ve ever seen before.”

“The inscription on Thor's hammer reads ‘Whosoever holds this hammer, if HE be worthy, shall possess the power of Thor.’ Well it's time to update that inscription,” said Marvel editor Wil Moss. Moss also addressed what was no doubt the immediate thought of many Marvel Comics readers, stating that “this new Thor isn’t a temporary female substitute – she’s now the one and only Thor, and she is worthy!”

Still don’t know who Thor actually is, but I’m interested to see how this series develops. I’m sure Jason Aaron will do a great job, and not just write Valkyrie-with-more-armour-and-a-hammer. 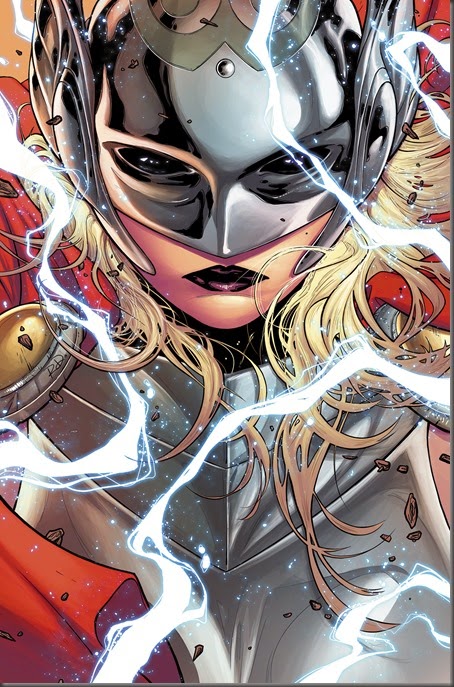