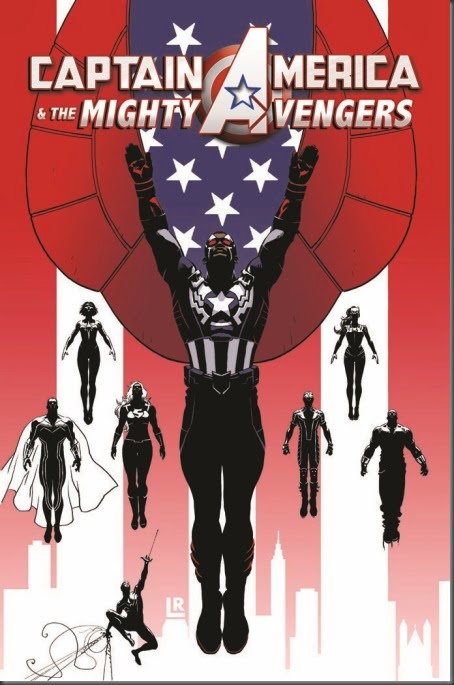 Hot on the heels of the identity of the new Captain America, there’s more on the way! Today, Marvel unveiled the cover for Captain America & The Mighty Avengers #1, a second series to feature Sam Wilson-as-Captain America. The series will be written by Al Ewing. The cover above and internal art for the book are by Luke Ross. The series will spin out of the upcoming Marvel Event (yup, another one), Avengers & X-Men: AXIS.

Sam Wilson has inherited his new patriotic moniker, but is he up to the task of leading a team of Earth’s Mightiest Heroes? The hero formerly known as Falcon has some new ideas for the rag-tag team of Mighty Avengers – but the events of AXIS may spell doom for the inexperienced leader. And not everyone on the team is happy with Sam’s new position as leader. Spider-Man is back, too – Amazing this time, NOT Superior. Luke Cage & Jessica Jones are still itching to give him some payback for trying to take their daughter to Child Services. And what is Luke Cage doing meeting with the head of the notorious Cortex corporation?

Here’s what Ewing had to say about the series, in an interview with Marvel.com:

“As for the mission statement – same as it’s ever been. Help those in need, however they need it. This is where all the work over the previous series pays off – the Gem theater is refurbished, the hotline is in place, the field team is on standby to take care of problems nobody else can handle. The Mighty Avengers are hitting the ground running.”