I received a press release this morning that really piqued my interest. Over the course of this year (and maybe some of early 2015), Headline will be re-jacketing and re-issuing Carol O’Connell’s Kathy Mallory crime series. I have never read any of the series, I’m sad to say. However, one of the things I love is finding established series on which to binge. I’ve found two ‘new’ series that I was going to start working my way through (Matthew Dunn’s Spycatcher and Daniel Silva’s Gabriel Allon series), but this one has to be added to the list, too. And may even be the first I try. I’m really looking forward to these re-issues.

It Happens in the Dark – Pub. Date TBC 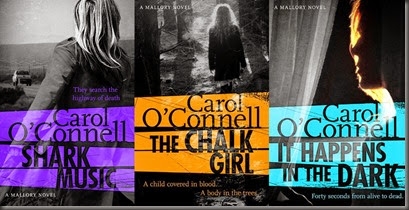 Here’s the synopsis for the first novel, Mallory’s Oracle:

Detective Kathy Mallory. New York’s darkest. You only underestimate her once.

When NYPD Sergeant Kathy Mallory was an eleven-year-old street kid, she got caught stealing. The detective who found her was Louis Markowitz. He should have arrested her. Instead he adopted her, and raised her as his own, in the best tradition of New York’s finest.

Now Markowitz is dead, and Mallory the first officer on the scene. She knows any criminal who could outsmart her father is no ordinary human. This is a ruthless serial killer, a freak from the night-side of the mind.

And one question troubles her more than any other: why did he go in there alone?

Posted by Civilian Reader at 10:10 PM