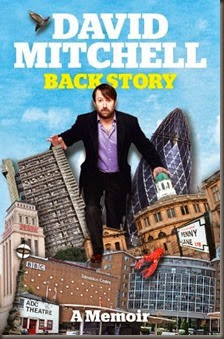 David Mitchell, who you may know for his inappropriate anger on every TV panel show except Never Mind the Buzzcocks, his look of permanent discomfort on C4 sex comedy Peep Show, his online commenter-baiting in The Observer or just for wearing a stick-on moustache in That Mitchell and Webb Look, has written a book about his life.

As well as giving a specific account of every single time he’s scored some smack, this disgusting memoir also details: the singular, pitbull-infested charm of the FRP (‘Flat Roofed Pub’); the curious French habit of injecting everyone in the arse rather than the arm; why, by the time he got to Cambridge, he really, really needed a drink; the pain of being denied a childhood birthday party at McDonalds; the satisfaction of writing jokes about suicide; how doing quite a lot of walking around London helps with his sciatica; trying to pretend he isn’t a total **** at Robert Webb’s wedding; that he has fallen in love at LOT, but rarely done anything about it; why it would be worse to bump into Michael Palin than Hitler on holiday; that he’s not David Mitchell the novelist. Despite what David Miliband might think…

The synopsis does a very good job of suggesting the tone and content of the memoir. But what it doesn’t fully convey is just how good it is. Delivered in Mitchell’s distinctive voice, with just the right amount of sarcasm and cynicism, this could very well be the best memoir I’ve listened to from Audible, or at least an equal to Stephen Fry’s The Fry Chronicles. This memoir had me laughing out loud plenty of times (something only Tina Fey and Jane Lynch have done so far).

I was surprised to learn just how much great television Mitchell has been involved in over his relatively few years of fame and celebrity. That being said, it was the chapters covering his early years that were hilarious – when talking about his successes, he came across as almost embarrassed (which was rather endearing). Tales from his childhood and years at Cambridge were great, and quite relatable. Recounting his post-university years of near-poverty, and his eventual success also gave me a modicum of confidence that I’ll be able to make something of myself, too (though, not in the way Mitchell has, I’m sure).

While the memoir is undoubtedly funny, as one can expect, it is also quite moving. When talking about his friends and colleagues, he is always gracious and warm. His respect and brotherly love for Robert Webb is obvious, and he is particularly heartfelt when talking about his writing/comedy partner’s wedding. The second-to-last chapter of the book, however, was the greatest surprise: in it, he talks about Victoria Coren, who he recently married. It is a very sweet and endearing story of a long courtship, with its ups-and-downs, but also shows Mitchell has a hitherto unseen romantic streak. Very moving.

Overall, and I know this review is relatively short, I loved listening to this. It’s funny, curmudgeonly, honest, and entertaining from beginning to end. There were no drops in momentum or interest. Excellently and clearly performed, great production, and a great story.

Very highly recommended. If you have any interest in comedian/actor memoirs, or comedy, then you must listen to and/or read Back Story.

I liked it so much, I’ve also bought the eBook, so I can read the best bits again, later – I’d like to share some of the best nuggets of wisdom, but I didn’t write any of them down while listening.

Back Story is out now – available as an audiobook from Audible, and in print and eBook from Harper.