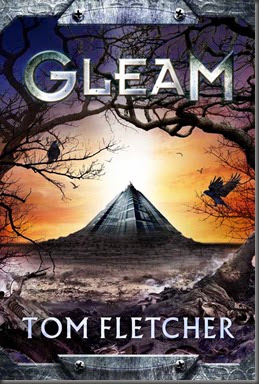 Now this sounds pretty interesting. Don’t know much about the novel or the author, but it caught my eye earlier today (when I received a press release about it…). I do know it’s the first in a new trilogy. Here’s the synopsis:

The gargantuan Factory of Gleam is an ancient, hulking edifice of stone, metal and glass ruled over by chaste alchemists and astronomer priests.

As millennia have passed, the population has decreased, and now only the central district is fully inhabited and operational; the outskirts have been left for the wilderness to reclaim. This decaying, lawless zone is the Discard; the home of Wild Alan.

Clever, arrogant, and perpetually angry, Wild Alan is both loved and loathed by the Discard’s misfits. He’s convinced that the Gleam authorities were behind the disaster that killed his parents and his ambition is to prove it. But he’s about to uncover more than he bargained for.

Tom Fletcher’s Gleam is due to be published by Jo Fletcher Books in the UK, on September 4th, 2014. Fletcher is also the author of The Thing on the Shore, The Leaping, and The Ravenglass Eye. The author is also on Twitter.