“The Immortal: Demon in the Blood” (Dark Horse) 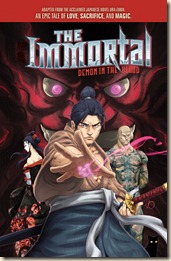 After a swordfight, Amane, a young samurai with a haunted past, is left for dead – only to be saved by a mysterious tattooist who imbues Amane with the immortal spirit of an oni demon. From that day on, Amane ages no more.

Amane learns of another with a similar oni – one that requires its host to kill – which leads Amane to the realization that the “other” is the man who murdered his sister years ago. But when his decades-long quest for the murderer causes him to cross paths with a maniacal serial killer intent on murdering the woman Amane loves, the only one who can help him is the man who killed his sister.

Samurai are a topic that I find quite fascinating. James Clavell’s Shogun, the tale of an Englishman in Japan at the time of the Portugese/Spanish influence on the island nation, is the novel that sparked my interest. Their sense of honour, their utter and calm lethality, their mysteries, their culture: everything. This fascination extends to the rest of Japanese culture and I’m always up for a variety of anime that showcase it, in all their myriad ways.

Ian Edginton’s script for the comic adaptation of Fumi Nakamura’s Ura-Enma has continued that love for me. It is a story that meshes samurai with oni, Japanese demons, and is a tale set in roughly the Gunpowder era. There is honour, betrayal, treachery, love, and romance, along with a certain bit of horror to the proceedings.

As a whole, the 4-issue series is slightly lacking in places, as it compresses a much larger work into the limited real estate of a comic. That being said, I found The Immortal to be a great read that held my interest from start to finish. Never once was I bored with it, and I was rather sad that it had ended.

The graphic novel begins on a shaky note as we are quickly introduced to the protagonist, Amane Ichinose, as he lies dying after being found guilty of betraying the Shinsegumi Samurai. It’s shaky in that, while the beginning itself is not abrupt, we rush through the panels to get to the really good bits as Amane is given a new lease on life, thanks to an oni-tattoo on his dominant hand – a tattoo that indicates he shares his body with a demon, whose power he can call on as he wishes. The hero comes to grips with his new situation fairly quickly and what follow are his adventures as an oni-tattooist seeking the man who killed his sister. 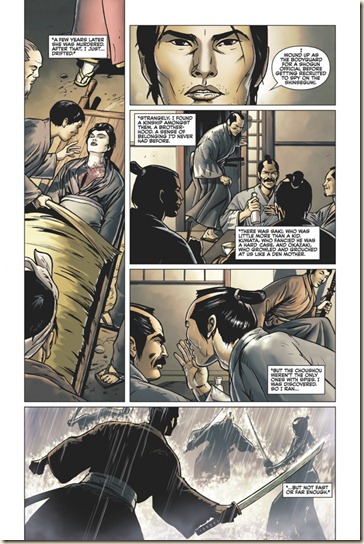 This is a really great story, one that holds your attention throughout. Edginton’s script hits all the notes that I expected out of the story, and also offers some great twists. Amane, despite the shaky start, is a character that I grew to like and understand, although the comic doesn’t spend enough time on his personal thoughts about the murderer he has been hunting for close to two decades. The character evolves over the four issues, in a way that, while not deep, is... different. Not something that is easy to put into words. He is the hero of the story throughout, but he is also much more. Imagine that the hero is fused with the wise, Old Teacher character, and you wouldn’t be too far off. Amane Ichinose had that vibe.

There are other characters, of course, but only one of them is prominent in the sense that she is in multiple issues: Amane’s adopted sister Natsu, the daughter of one of the Shinsegumi samurai that he betrayed almost twenty years ago. Her character gives the impression of depth, but it’s not something that I felt was captured well in the script, as she isn’t explored as well or as much as Amane, even though she is just as crucial to story in the second half. If Edginton had the benefit of two more issues, this could no doubt have been addressed. 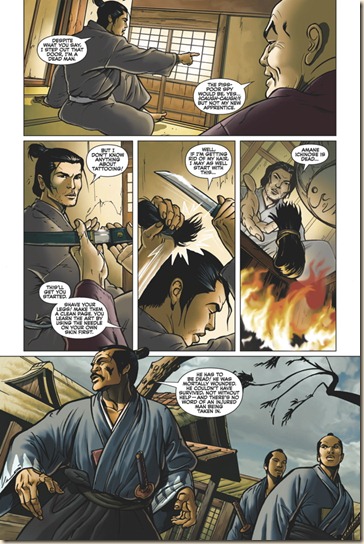 The villain of the story is someone who doesn’t make an appearance until much later and that robs him of a little bit of the intimidating effect he would have had otherwise. As with Natsu, I thought he wasn’t being done justice, but I still liked how he turns out. Not a typical villain by any measure, which makes the story that much fresher than anything else in the same genre.

The twists towards the end of issue three and the second half of issue four were certainly compelling. I had been expecting something to that effect, and though I wasn’t surprised when they came, it was still thrilling to be proved right. That part Edginton definitely got right in terms of impact. However, as with my previous two points, this is something that could have used a bit more room to be explored in more depth.

The Japan of the time is an era that I rather like reading/watching about, although I haven’t done much of either, if I’m honest. At the moment, all I can think of is Shogun and the two popular anime series Rurouni Kenshin and Samurai Champloo. Immortal is like them in certain aspects and yet it is different enough to stand on its own.

In my opinion, the setting and time-period really needed more exploring. There are steampunk elements thrown in for the script but they are never justified. They are just there, and they never rate a mention by the character. Having the characters expose that side of the era they live in would have been fantastic, and would have made the story that much more compelling and unique.

And another would be the oni themselves. While not portrayed as something incidental to the story, we never really go into any of the psychology behind them, why they do what they do. It would have made for some great panels, I’m sure. It’s not a major concern, as the rest of the book and artwork make up for these oversights.

The art, pencils done by Vicenç Villagrasa, was rather good as well. They definitely captured the feel of the era as far as I can tell, in terms of the characters’ clothes, the backgrounds, etc. Definitely one of the better-drawn graphic novels I’ve read to date. Combined with the script, they make the experience complete, and all the artists definitely deserve to be congratulated on this.