“Curse of the Mutants” (Marvel) 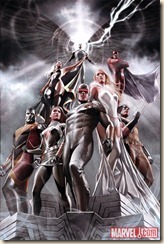 A human bomb explodes in San Francisco’s Union Square. Dozens are covered in blood. Jubilee is one of them.

The former X-Man soon falls victim to a strange manufactured virus – all part of the plan of Xarus, son of Dracula. Xarus is the new lord of the vampires, having slain his father, and he has an ultimatum for the X-Men: join his ranks as vampires, or perish. The X-Men enlist the aid of vampire-hunter Blade and even bargain with a resurrected Dracula himself, but who will win the ultimate battle between mutants and vampires in the streets of San Francisco?

I’ve been wondering about this book for a while. I always thought it was just some gimmick – Marvel attempting to tap into the vampire-loving zeitgeist that seems to have swept genre fiction, YA, movies and TV. As it turns out, Curse of the Mutants is more than that. It has a pretty cool premise, but I’m not sure it’ll be for everyone.

Curse of the Mutants marked the arrival of Marvel’s “Heroic Age” in X-Men comics, and the beginning of a new X-Men series. Vampires from all over the Marvel world have descended upon San Francisco, under the leadership of Xarus, the son (and murderer) of Dracula. They goal? To add the few remaining mutants to their ranks as super-vampire types. There’s a pretty elaborate plot to make this happen, which for the most part was executed rather well – in terms of the characters’ actions themselves, as well as the writers and artists. It all kicks off with a seemingly-random death in a public space in San Francisco, which many people think is a suicide bombing: 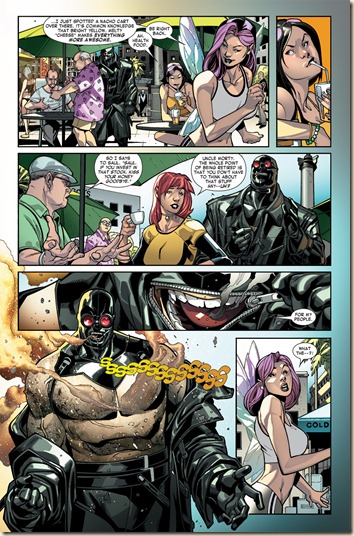 It turns out to be so much more, however, as the X-Men’s scientific team, the “X-Club”, attempt to figure out what really happened, and how Jubilee’s presence at the centre of the action has changed her. She’s getting very… thirsty. What follows is a rapidly moving story as Cyclops and Co. attempt to thwart Xarus’s nefarious plans to co-opt and turn the mutants to swell his growing vampire army. It’s a pretty decent (if schlocky) premise.

Speaking of the X-Club, and as a little aside – Gischler’s version of Dr Nemesis in this book is nowhere near as good as Simon Spurrier’s from the limited X-Club series that came out last year. Spurrier was able to tap into Nemesis’s arrogance far better, and generally have a lot more tongue-in-cheek fun with the characters. 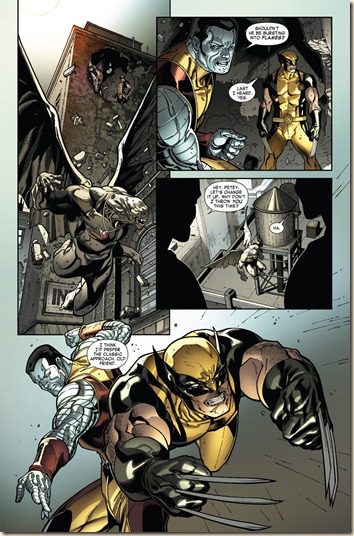 The story’s pretty good, and it’s certainly an action-packed narrative to kick-start the new series. There’s some decent conflict within the X-Men’s ranks, as tensions bubble to the surface. We see how calculating, cold and gifted Cyclops has become, growing well into his role as leader of the few remaining mutants on Utopia. We also see the strain in his relationship with Wolverine come to the fore (I’m not sure how long it was until the Schism storyline, but it’s definitely clear that things aren’t going well between the two of them). 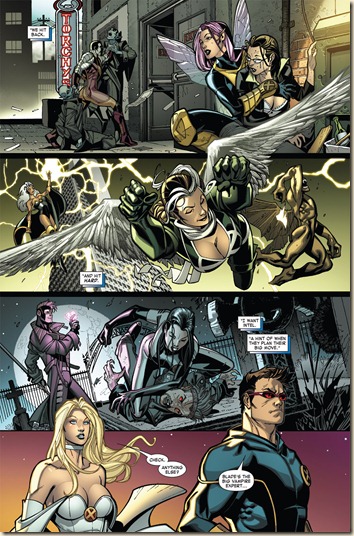 While definitely fun and a brisk read, the story lacks much depth. Some of this may be the result of my lack of familiarity with the X-Men story at this point. Even though there were a few moments when, for example, it was clear why Wolverine was so desperate to save Jubilee, it felt more like we were being told that Logan cares for her, rather than really shown it. It was a little clunky, and not the best attempt of injecting emotional depth into the story.

One thing that’s pretty immediate about this book is the artwork: it’s pretty fantastic. Sharp, clean, atmospheric and vivid, it does a great job of bringing the story to life. It’s not always perfect, as there are moments when a character looks a little odd (more cartoony), but these are few and far between. 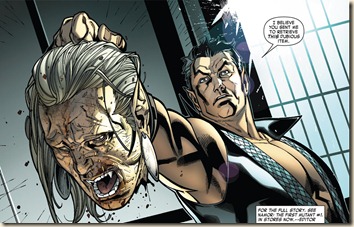 I know this is just a short review, but there’s really not a whole lot more to say about the book. It’s fun. It’s an interesting introduction to the new X-Men series (which is still on-going, and now written by Brian Wood). It just didn’t rock my world. I’ve read better X-Men stories, but I’ve certainly read a lot worse, too.

If you want a decent starting place, then give Curse of the Mutants a go. It does a good job of situating the reader in this new Marvel reality in terms of the mutants and characters involved, but I think throwing in all the vampires may also confuse some readers and not really offer a representative idea of what the X-Men are all about. If you’re familiar with the franchise, however, then this will offer an interesting, well-execute alternative approach with some good, new challenges for the X-Men to face.

Posted by Civilian Reader at 2:15 PM