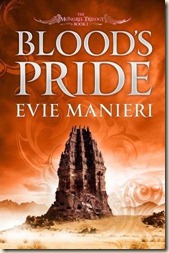 An intriguing new voice in fantasy

A generation has passed since the Norlanders’ great ships bore down on Shadar, and the Dead Ones slashed and burned the city into submission, enslaving the Shadari people. Now the Norlander governor is dying and, as his three alienated children struggle against the crushing isolation of their lives, the Shadari rebels spot their opening and summon the Mongrel, a mysterious mercenary warrior who has never yet lost a battle. But her terms are unsettling: she will name her price only after the Norlanders have been defeated. A single question is left for the Shadari: is there any price too high for freedom?

I had never heard of Blood’s Pride before I got my hands on a copy of the book. After diving in with very little information, it turned out to be a very interesting, well-written start to an epic fantasy series. It’s not perfect, but I found myself addicted to the world, and fascinated by the relationships and differences between the characters, races and cultures.

The novel opens with the arrival of the Norlanders on the shores of Shadar. The invaders come across like ghoulish Vikings, with their grey skin and aversion to sunlight. It is not surprising that the locals refer to them as the “Dead Ones”. Of their motivations for invading Shadar, we are told early on,

“Already they were picturing the mines they would dig to extract the black ore, that miraculous substance which had brought them to these unsuspecting shores. Already they could smell the sulphur from the smithies where they would smelt the ore into metal laced with their own pure blood. Already they could feel the great swords in their hands, swords that would obey their owners’ thoughts as well as their hands: the secret property of the black ore only they had learned.”

Blood’s Pride is the story of the Norlanders’ occupation and exploitation of Shadar, and how the Shadari plot to overthrow their oppressors. At the same time, some members of the two races have not only learned how to live together, but also have formed uneasy working relationships. The Norlander garrison is not without its internal politics and tensions (perhaps typical of long-time overseas postings), which later in the novel spills into the fore in an explosive and bloody fashion. When the Mongrel appears, hired by the Shadari to help them overthrow the Norlanders, the delicate situation in the region is thrown into utter turmoil and everything comes crashing down – the Norlanders and the Shadari share the brunt of the effects, and everything is going to change.

Manieri has presented the two main races with a considerable selection of obstacles to overcome. The Norlanders’ language and method of communication is telepathic (they find normal speech ugly and hard on the ears, and punish all unnecessary noise – yet another reason they are referred to as the Dead One, as they appear to prefer the quiet of the grave). The telepathy isn’t private, however, and all Norlanders and also the desert-dwelling Nomas can hear and ‘speak’ it, but the Shadari cannot. It’s a really well devised and executed element to this story and world. A further obstacle is the fact that the Norlanders are burned by both the sun and physical contact with the Shadari, whose body heat is too much for them. It creates a really interesting dynamic, especially for the characters who have become romantically involved with a member of the opposite race.

Manieri’s characters are all well-drawn and three dimensional, and their stories are interesting and engaging throughout. The children of the Norlander governor, are busy vying for control of the colony and bickering constantly with each other. The eldest, Frea (known as “The Wolf” by the Shadari, not only because of her sculpted wolf-helm, but also because of her temperament), rules the colony with an iron fist, clearly despises her subjects, her family and also the fact that she’s not living at the Norlander court. Over the years, she has become adept at manipulating members of the garrison for her personal gain – her treatment of Rho, a smitten soldier, is cruel and eventually comes back to bite her. Frea’s younger sister, Isa, born in Shadar, is naïve and in love with a Shadari, and just wants to claim her mother’s sword (the Blood’s Pride of the title) now that she has come of age. However, she remains distraught over a tragedy she believes she caused in her childhood – something Frea holds over her head and endlessly antagonizes her with. Their brother, Eofar, is tired of the family’s bickering, but also resigned to remaining in Shadar. He has established his own roots in the land (unacceptable as they may be to other Norlanders), and part of him doesn’t want to leave. They are an interesting family to read of – they are more dysfunctional than most, certainly, but their issues and concerns are well-written and presented, and never feel forced. That being said, I thought Isa wasn’t as strong a character as the other two, though she did improve over the course of the story.

The Shadari are a conflicted people – they have labored under the strict rule of the Norlanders for a generation, having been abandoned by their leaders. We are never told why they were abandoned, but we do learn of what happened to them. It appears that some Shadari, albeit a very select and dwindling few, have some manner of special powers. Daryan, the last daimon (king) of the Shadari, has been sequestered at the stronghold, his true position a secret from his Norlander masters. His is another story of a family torn apart by unexpected circumstances, dysfunction, and secrecy.

Jachad Nisharan, the king of the Nomas people (and the “son of the sun god Shof”) is probably the most interesting character. He has no real stake in the Shadari-Norlander conflict, except that he is familiar and close to the Mongrel. As a true outsider, he must walk a delicate balance between helping and being blamed for anything that goes wrong (which it does, and he is).

Despite really liking the world, premise and characters, Blood’s Pride did have one main weakness – and that is the overall structure’s momentum, which dropped off just over halfway through. The first 60% or so of the novel had me utterly hooked, and I greedily read these couple hundred pages, as events felt like they were moving inexorably towards a major confrontation between the Shadari and their Norlander oppressors. This sort-of occurred, but in a very quick and seemingly perfunctory fashion.

There were quite a few revelations up to the half-way point, turning the social-microcosm on its head, as changes in leadership and old resentments bubbled to the surface. But it almost felt as if that point could have been expanded upon and formed the end of the first novel (in another series, it would have been a natural first-novel stopping point). However, Manieri has plenty more story still left to tell, and we have another build-up of tension. The story seems to be heading towards an almighty battle, but that doesn’t appear to be the focus of what ends the book, which was a little frustrating. There is an important confrontation, but again it felt secondary to everything else that was going on. The end meandered a little more than I would have preferred.

I think, therefore, it might have been a good idea to tighten up the final 40% of the novel just a little more. Don’t get me wrong, the whole book is very good, original and also engaging. It’s just the change and drop in momentum did derail my reading a little bit. As the story continued, and I readjusted myself, though, I started to eat up the pages once again.

This, actually, is one of Manieri’s strengths: her prose style is very fluid and uncomplicated. There’s very little chaff, it’s stripped down and quickly-paced, making Blood’s Pride very easy to read. It’s a strong opening salvo in the series. There is a strong cast, and despite their number I never needed to consult the Dramatis Personae to keep them straight in my head. They’re all distinctive, with their own voices, concerns and agendas.

The novel has a great focus on the things people are willing to do in the name of protecting their own, strengthening their position, and keeping others downtrodden. Manieri goes further than many in creating two distinct cultures and races, and the clash of cultures is very nicely written and brought to life on the page. The story and characters are original and fresh, while retaining just enough familiarity that readers will quickly feel at home in the world.

While the novel is not flawless, it is nevertheless original, engaging, and quite addictive. Manieri is a strong new voice in fantasy, and definitely one to watch in the future. Recommended for all fans of epic fantasy.