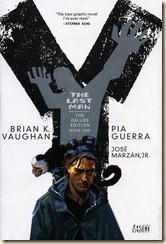 All the men are dead. Except for one. The future rests on his shoulders, but he’s not ready for that responsibility.

This is the saga of Yorick Brown – the only human survivor of a planet-wide plague that instantly kills every mammal with a Y chromosome. Accompanied by his pet monkey, Yorick searches for his lost love... And the answer to why he’s the last man on earth.

Before picking this book up, I had managed to read the first issue of the series for free on Comixology. It gave me just enough to make me know I had to read this series. And I’m very glad that I took the chance on this collection. It’s an interesting an original apocalyptic premise, one I think Vaughan and Co. manage to pull off intelligently and deftly. This book collects the first two storyline, “Unmanned” and “Cycles”.

It’s an interesting series, but it’s also one that is a little difficult to write about. Yorick is the last man on earth (his monkey, Ampersand, is the last male animal, too). After the first chapter outlines the Event from multiple perspectives, things narrow down to just a small handful of perspectives, with Yorick’s obviously dominating the narrative.

Yorick heads to Washington, D.C., to find his mother. There, the lightly-staffed White House comes under siege by wives of (now dead) Republican Congressmen, demanding to take their fallen husbands’ seats. A scuffle ensues, a new President is found, and Yorick is shipped off to Boston to find Dr. Mann, a biologist who’s been researching various aspects of cloning.

Meanwhile, a “Daughters of the Amazon” movement has very rapidly acquired a large following. They believe men are evil (just imagine the worst, cliché misunderstandings of feminists, add a little more crazy, as well as voluntary mastectomy, and you’re getting there). After he gets into a fight with a group of them at the Washington Monument (a rather appropriate memorial to all the dead menfolk), the leader of the group declares that Yorick must die, as the last exemplar of the male “oppressors”. Little does Yorick know, the Daughters have an operative who has a long history with him.

It’s a really interesting premise, and I think the creative team have done a brilliant job of bringing this original post-apocalyptic world to life. They’ve also done a good job of highlighting the inequalities of the real world – if by just pointing out the things that have stopped working because previously this or that field was dominated by men. Also, the Amazons, while a crazy cult, are used to give readers some insight into other inequalities (for example, female incarceration statistics, which speak volumes). The writing is great, the dialogue is realistic and natural, and there is plenty of character development. Yorick’s not the most intelligent character, and I liked that he is fallible, and blunders ahead on occasion without thinking things through – true, to begin with, it has more to do with his difficulty with reconciling the new world he finds himself in.

I really enjoyed this, and can’t wait to read the next volume. This is a superb, original post-apocalyptic tale. Even better? The fact that it’s already complete, and available in paperback collections or (more pricey), five deluxe books.

Posted by Civilian Reader at 2:04 PM