Not a Review: “The Heretic Land” by Tim Lebbon (Orbit) 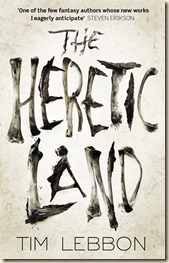 A victim to my unsettled mind

Arrested by the Ald, scholar Bon Ugane and merwoman Leki Borle find themselves on a prison ship bound for the island of Skythe – a barren land and the site of long-ago wars. Warped and ruined by the ancient conflict, survival on the island is tough and its original inhabitants are neither friendly nor entirely still human. But something else waits on the island, a living weapon whose very existence is a heresy. Destroyed many years ago, it silently begins to clutch at life once more.

I’m afraid I didn’t actually finish this novel. Not because it was bad, by any means. It just wasn’t clicking for me while I was reading it, and I ended up putting it down in favour of something else after just 100 pages. Here are some initial thoughts on what I did read.

It’s actually a  novel that seem to revel in its world-building, without being too dense or excessive. I loved a lot of the elements that Lebbon has incorporated into his world, and his characters are readily likeable and sympathetic. I particularly liked Bon Ugane’s son, who is a genius but also slightly like Sheldon from The Big Bang Theory in his single-minded thirst for knowledge and slight awkwardness. The opening scenes that detail Bon Ugane and Leki Borle’s trip to Skythe are great, and to begin with I was hooked. But, sadly, I’m just too distracted at the moment to dive into an entirely new world, I think.

The Heretic Land is just the right amount of dark, which is certainly my preferred ambience. It has everything from a devastated prison island surrounded by lethal seas, religious and political persecution, illegal magic, a hidden history, and plenty of other shenanigans going on to slake the thirst of any fantasy fan. The author’s prose is fluid but not exactly quickly-paced, which may have been why I didn’t feel like I was engaging with it.

Anyway. I will most likely come back to this novel in the future, and will hopefully write a proper review when I do. But, at this point in time, I’m just not in the mood for it. Maybe I need some more variation? A couple of novels outside of the fantasy genre (which has dominated of late). Some thrillers and sci-fi, perhaps.

I haven’t seen anyone else mention it on their blogs or anywhere else, really – if you’ve read it, feel free to add some of your own comments below.