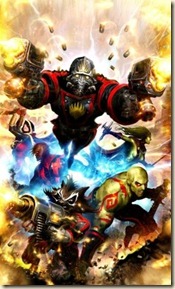 Back-to-back Annihilation wars have weakened the boundaries of our universe. Dark gods and monsters are seeping through the cracks, reigning horror upon many worlds. In the face of terror, who stands to defend a desperate universe? Star-Lord and his squad of butt-kickers – the modern day Guardians of the Galaxy!

Collects: Guardians of the Galaxy #1-6

After it was announced that Marvel Studios was going to be making a Guardians of the Galaxy movie (currently penciled in for 2014, apparently), I was interested to give the series a try. It’s written by Dan Abnett and Andy Lanning, too – a writing duo who have, thus far, failed to disappoint. I stumbled across a mint-condition remaindered copy of this first volume in a local bargain bookstore, so snapped it up and dove right in. It’s a… different sort of Marvel comic, but I had a blast reading it. 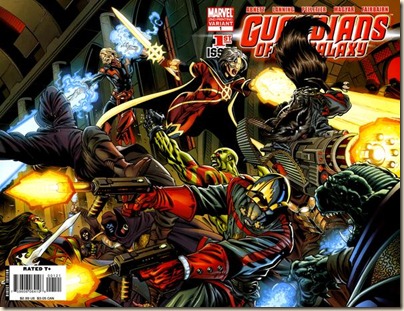 The story follows on from the two Annihilation storylines, which I sadly don’t have any familiarity with (that’s becoming a familiar refrain in my Marvel reviews…). Nevertheless, the first few pages do a great job of both dropping us right into this story while also locating us in the overall narrative of this part of the Marvel universe.

The book opens with an introduction to the team, and we follow them across a couple of missions and some troubles at their interstellar base at “Knowhere”, which is in the head of a Celestial. (Stick with me, there are going to be a few weird statements not dissimilar to this…) I enjoyed the narrative approach and structure – using the team’s debriefing ‘clips’ as cut-aways and exposition – which is fast-paced, action-packed, and filled with plenty of asides and snarky comments. There are some strange elements to the story, for example the exaggerated sci-fi elements, the crazy religious nuts who are dogging the Guardians, and so forth, but Abnett and Lanning haven’t gone totally crazy with things. 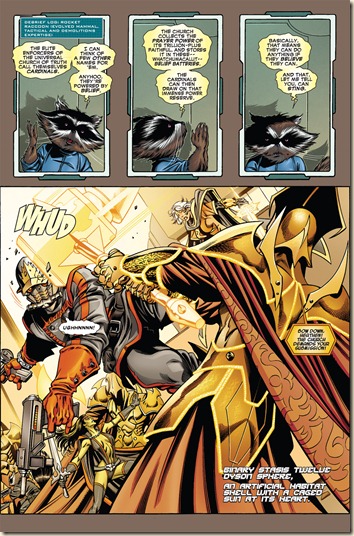 The artwork, as you can see from the included sample, is superb – it’s vibrant, detailed and clean throughout, with plenty of atmosphere on Knowhere and tons of dynamism in the action sequences.

The final couple of chapters tie in with the Secret Invasion Marvel event, but again I have no experience of the rest of that story, so I can’t comment on how they complement each other. As part of the Guardians of the Galaxy story, though, it works rather well. Strange goings-on back at Knowhere create extreme tension between the scientific delegations who also call the place home and the Guardians. Things do not go well, when suspicions and accusations start flying. Drax’s solution to the problem is wonderfully dark (yet highly effective). 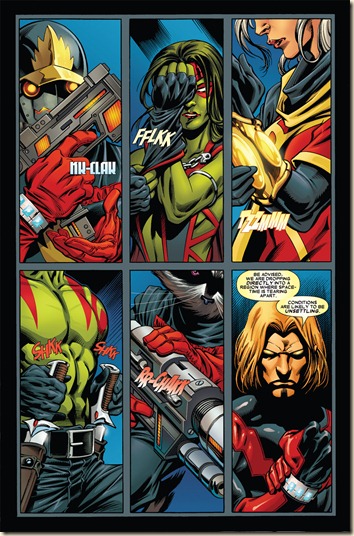 The characters are pretty fun, as well as diverse. They all have their foibles and hang-ups, as is standard in team-up comics. They don’t all necessarily get along. A couple of them (Drax and Gamora) have particularly dark and brutal pasts. Warlock appears to have been resurrected and loves talking about tears and rifts in space-time. Star-Lord, the leader of the group has no super-powers, but is very handy with guns. Then there’s Rocket Raccoon and Cosmo…

I’ll admit I was quite skeptical about this title when I first looked into it: A raccoon explosives expert? A telepathic space dog? Yeah, I raised an eyebrow a couple of times, for sure. But, when I started reading it, it is very clear that Abnett and Lanning have made it work. It is definitely tongue-in-cheek, it embraces some wonderful tropes of bombastic space opera, and doesn’t take itself too seriously. Which is exactly what a series like this needs. I’m still not entirely sure how this will go over in the movie theatres, but I know I’ll definitely go to see it. 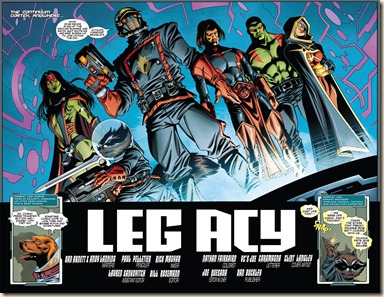 The end of the book is quite momentous, throwing out a couple of curveballs and leaving things very uncertain for our team. I’m going to try my hardest to get a copy of volume two, though given how difficult that will probably be, I’m not sure how easy that is going to be. I may have to go with the Comixology editions (they have issues #1-18 available, whereas the four collected books seem to be either out-of-print or just very hard to find).

If you’re after some great, humorous, bombastic Marvel space-action, then Guardians of the Galaxy is probably the series for you.

The aforementioned movie announcement came with the following teaser image, in which you can see Drax, Groot, Star-Lord, Rocket Raccoon and Gamora: 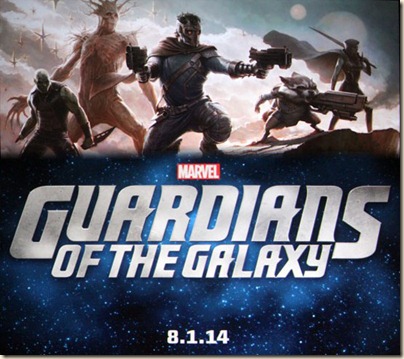