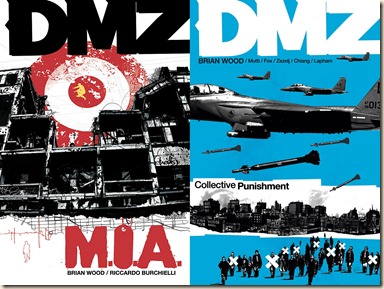 Nearing the end, political and social tension in the DMZ is once again on the rise

It’s been great to get back into DMZ after a couple months away from it. As I’ve come to expect, these two books continue Matty Roth’s story in Manhattan very strongly. That Wood has been able to maintain the high standard of this story for so long is quite impressive. I’m really looking forward to reading the final two books in the weeks to come (review sometime in September). I have said it before, and I remain committed to my comments about this being one of the best comic series I’ve ever read. I can’t recommend this highly enough.

After the shattering events of HEARTS AND MINDS, M.I.A. takes Matty to a remote and desolate section of the city. Self-exile forces him to take a good, hard look at himself and his conduct since he entered the DMZ, and he doesn’t like what he’s seeing. His discovery presents him with an opportunity that he’s tempted to take, but is the price too high? 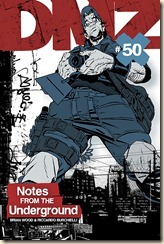 “Notes from the Underground”: The first few pages are the all-star realised “Notes from the Underground”, which range from single-page catch-up vignettes to longer mini-stories. Both formats introduce us to a couple new characters as well as re-introduce us to some familiar faces. They’re all pretty good, and do a lot to expand our impression and knowledge of the DMZ and it’s people, customs, and reality. They do not, however, really move the main DMZ storyline forward. This was ok, though, as given the momentous event at the end of Hearts & Minds, it was a good idea to use the anniversary 50th issue to offer a bit of a breather. The artwork is wonderfully varied, and each Note has a different impact. It’s unfortunate that Lee Bermejo’s contribution was only one page (no secret he’s one of my favourite comic artists). There were a couple of pleasant surprises, too: the ‘silent’ four-page “Little Plastic Toy” was particularly excellent; the story in which Matty meets the Commander of the Free States of America was totally unexpected and very well done; but also the single-page pieces were also excellent.

“M.I.A.”: In the main story, Matty’s gone even further under the radar (Washington Heights, to be exact, and other areas in Northern Manhattan). Both the writing – presented predominantly as Matty’s internal monologue – and the artwork perfectly combine to create an ambience of isolation and depression that is superbly effecting. Matty’s time in the DMZ have really done a number on him both physically and mentally, and he has decided that it’s time to turn himself in to the US authorities. This means a dangerous trek through the DMZ to the 59th Street Bridge checkpoint. Along the way, he’ll meet a couple old friends and dodge bullets and other hazards of Manhattan. 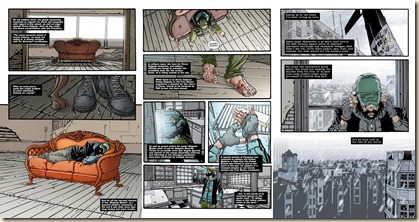 The US military and government have reacted violently to the earlier attack 25 miles to the north of Manhattan, with a domestically-applied Bush Doctrine of preemptive strikes. 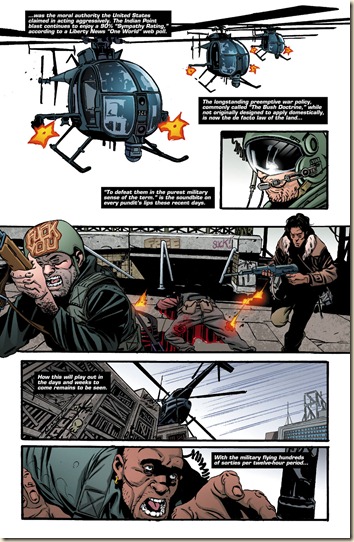 Life is just getting harder, more violent and uncertain for the people of the DMZ, and Matty’s mind is really starting to crack under the pressure. What he finds at the checkpoint, though, is entirely unexpected. It will change his role in the DMZ for good, and we also see him make a bold move, taking responsibility for his own role in some pretty dark moments from the two previous books.

In this collection, citizens and soldiers – new characters and old – weather the storm of a brutal “shock and awe” bombing campaign on the DMZ.

This book has five loosely-connected stories, each of which can be read individually without the others, but I really wouldn’t recommend it (the whole series is just too good to miss any issue…). Each vignette adds more depth and detail to the characters we have come to know – some more than others. It’s a nice diversion from the main story, but as has been the case with all of these minor diversions, I’ve always been eager to get back to the wider, Matty Roth-led storyline. Sadly, my story ADHD has done a disservice to the extra stories, as they are uniformly very well-written. It’s also very nice to have a variety of guest artists contribute to the series. 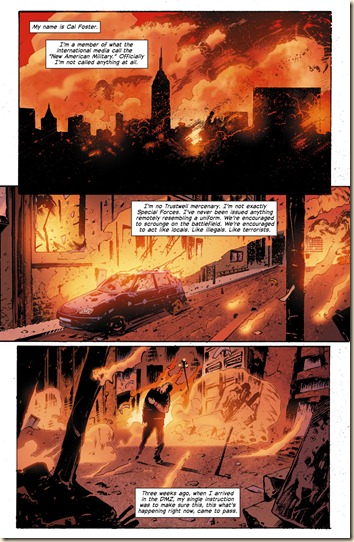 “Five Hours Under Fire”: This was a pretty grim story, which sees one of the spotters for the bombing campaign come face-to-face with sheltering DMZ inhabitants. Over the course of the night, he must hide his identity – though an appearance by Zee, Matty’s one-time girlfriend, manages to pop some of the façade – and our protagonist meets someone hurt by the bombs.

“Ghost Protector”: This is a pretty great story, actually, focusing on the enigmatic Wilson, the self-professed protector of Chinatown and frequent confidant to series star Matty Roth. With the U.S. poised to steamroll its way into the city, it’s do-or-die time for the old man. Will this be the end of the old man, or will Wilson be able to weather the coming storm? Wilson’s one of my favourite characters, so I was very invested in this chapter. I won’t spoil anything further.

“Amina, Mother of One”: Amina is an interesting character. Tragic on so many levels, one who doesn’t seem to feel or experience much hope – indeed, life in the DMZ has just thrown her one beating after another. In this story, she finds a baby abandoned in the street. She cares for it for one night, and we see how its presence momentarily changes everything for her. It’s a very touching story, one that sadly had to come to an end.

“A Decade on the Wall”: We are reunited with Decade Later, a graffiti artist who appeared briefly in an earlier book. It’s a very poignant, sad story, told from Decade Later’s perspective in the form of his internal monologue. The artist was arrested, detained, tortured and let go by the US Army. The final few pages are very powerful, simply realised. It’s a sad tale sure to tug on the heartstrings.

“Matty’s War”: Waiting out the bombing. Meets some more interesting people. Some assholes, too. In the final chapter, Matty mingles underground with a group of survivors. Highlighting the special he deal was given at the end of “M.I.A.”, we see the almost absurd lifeline he’s been given. (It’s a great full-page piece, which has to be seen to be believed.) He decides to lend his Liberty News secure satellite phone to the DMZ citizens, allowing them to reach to loved ones outside the city for the first time in ages. It’s in direct violation of his rather unbelievable contract. Is this the beginning of a new, compassionate Matty looking to atone for some of his more extreme actions, when he got swept up in events? This was a very good closing story, and I look forward to reading the rest of the story.

The final two books in the series – “Free States Rising” and “The Five Nations of New York” – are already published, and are waiting for my in New York (thank you Alyssa for holding on to them for me), so expect a review in the next couple of weeks. After which point, I’ll have to decide on which other Brian Wood series to read – either Couriers or Northlanders. We’ll see.

Posted by Civilian Reader at 9:28 PM