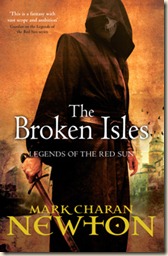 The final book in The Legends of the Red Sun

The culmination of the Legends of the Red Sun series. This takes us back to Villiren where Commander Brynd Lathera prepares for the coming battle ahead with invaders from the other world.

Villjamur is gone, Rika and her sister Eir are all that remains of the Jorsalir line and Brynd is determined that Rika will lead her people in the creation of a new city and new culture.

But Villiren has never been a city to play by the rules and, despite the impending threat of destruction, criminal gangs work to undermine everything that Brynd has set out to do. The world is on the brink of destruction and anarchy...

Final books in series are always tricky. Will the author tie everything up with a lovely bow for readers? Will there be vague, open-ended solutions that will have fans guessing and debating what really happened? Will it be an awful mess? There are many decisions and pitfalls that can catch the unwary or incautious author. But with The Broken Isles, Newton has pretty much dodged them all. This is a great ending. The story is top notch, as we can expect. I think each book in the Legends of the Red Sun series has improved in every way, and The Broken Isles is no exception, with great writing, an exciting story, and engaging characters.

[Despite my best efforts, there are some spoilers in this review. If you haven’t read the first three books in Legends of the Red Sun, I obviously think you should go read them now, as the whole series is fantastic. However, if you want to keep reading this review, you should proceed with caution.]

When the novel begins, we’re quickly relocated back into the world, into the swing of events, and reacquainted with the characters. Villjamur has been destroyed, and the fleeing refugees are dogged by the invaders and their Sky City. Word reaches Villiren, itself recovering from the battles in City of Ruin, and Brynd must marshal a response to save as many people as possible. At the same time, anti-“alien” sentiment in Villiren, fanned by Malum and his gang, is making life extra-difficult for the leader of the Night Watch, as he attempts to negotiate a settlement with the inter-dimensional refugees as well.

The story is presented from a number of perspectives, all of them unique and distinctive: there’s Brynd, the albino Night Watch Commander, who is in charge of Villiren’s defence, and enjoying the position of de facto ruler. Jamur Eir and Rika are prominent, as is Eir’s companion, the roguish Randur. Unfortunately, some of the previous events have left Rika both physically and psychologically damaged – perhaps even beyond repair or saving. Fulcrom, the Rummel former-inquisitor, is accompanying the refugees from Villjamur, alongside Lan, the heroine from Book of Transformations.

The narrative includes more of a focus on the enigmatic otherworlders who have joined our heroes than in previous books, but they do not dominate the story – Brynd, Randur, Eir, and Jeza are the key protagonists. Both the Amazon-like Artemisia and bizarre Frater Mercury are fascinating characters, but they are also rather frustrating to their ambassadors. Especially Fulcrom, who finds Frater Mercury endlessly ittitating, unfathomable, and downright difficult on many occasions.

There are also a couple of new additions to the cast. My personal favourites are Jeza and her fellow young cultists from Factory 54, who provide some unexpected help to Brynd’s plans. I really enjoyed these characters, and it is through them that we learn even more about cultists and the science-magic of Newton’s world. They also bring to life the Mourning Wasps, devised by China Mieville specifically for this book (sketch below). 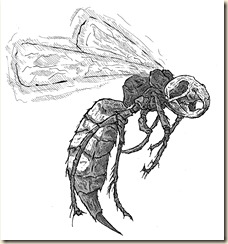 As with Newton’s other novels, The Broken Isles is filled with imaginative and original creatures, concepts and more. The inhabitants of Villiren are coming to terms with the fact that they will have to share their land and city with aliens from another dimension. Many are not reacting well, and Brynd is forced to take a firm hand against those troublemakers who want to do anything to prevent the Other from unsettling the status quo. It offers up some nicely-done commentary on racism and intolerance, without bludgeoning the reader about the head. It’s a deft touch, and I love the way Newton is able to seamlessly weave social commentary (including some about bankers, this time) into the narrative. The discussions about Villiren’s future are also an interesting examination of nation-building under the shadow of war. It’s really interesting stuff. Things are, I admit, rather neatly tied up at the end, which may not please everyone, but I appreciated that Newton decided to properly finish the story.

Newton’s prose is, once again, exceptional – it is fluid, devoid of extraneous verbiage, and really pulled me on through the novel. He kept me reading well into the night. His descriptions are evocative, yet stripped-down, and each scene’s atmosphere and ambience is expertly portrayed. The author’s writing has improved with every novel. It will certainly be interesting to read the new edition of Nights of Villjamur (out in November), on which Newton has done a re-edit and tweak.

I think my only real complaint about the novel is the absence of the chain-smoking Hanuman from City of Ruin. As Randur points out at one point, echoing my own thoughts:

“Ridiculous, if you ask me, though the flying monkey things were fun.”

The plot builds to an action-packed climax, as battle erupts on multiple fronts, leaving Brynd’s forces over-taxed and, potentially, over-matched. There’s also perhaps the most bad-ass “boss fight” near the very end, which I thought perfectly exhibited Brynd as the brutal, elite-soldier he is.

Once again, Newton has written a novel of depth, compelling characters, excellent drama, and captivating prose. I love this series, and I’m rather sad it had to end. Easily one of my favourite fantasy series, I highly recommend this to everyone, especially people in search of fantasy that is a little unusual.

Legends of the Red Sun: Nights of Villjamur, City of Ruin, The Book of Transformation, The Broken Isles