I really enjoyed the first collected edition of Mark Waid’s new run on Daredevil, and I’ve been waiting to get my hands on book two (which I’ve ordered) and the soon-to-be-released book three. In the meantime, I’ve been keeping on top of the artwork and so forth for individual issues. And the art for #18, by Paolo Rivera, is pretty interesting and striking: 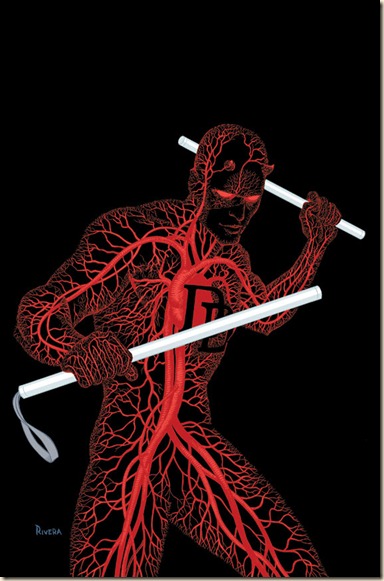 It fits in rather nicely with Daredevil’s special sight – although, while he wouldn’t be able to see someone’s venous system like this, there’s something about this picture that is somehow apt.

The issue is written by Mark Waid and pencilled by Chris Samnee. Here’s the synopsis:

Get ready for the biggest Daredevil story yet, as a new menace walks the streets of New York – the ruthless killer called Coyote! Can Daredevil put a stop to his crime spree? And with all that has been happening in his life, just how sane IS matt Murdock?

Daredevil #18 will be published on September 19th.