I’m a little late to the party, here, seeing as nearly everyone has shared this cover (ever since it was unveiled on A Dribble of Ink). And, once you look at it, you can see why. The cover for Kameron Hurley’s upcoming fantasy novel THE MIRROR EMPIRE is pretty damned stunning… 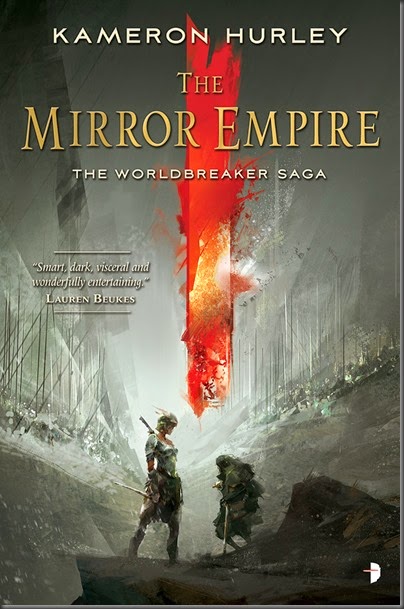 The piece is by Richard Anderson, who also did the US cover for Brian Staveley’s The Emperor’s Blades. (I must say, though, this one is much better.) The novel is due to be published by Angry Robot Books in September 2014. Here’s the synopsis…

On the eve of a recurring catastrophic event known to extinguish nations and reshape continents, a troubled orphan evades death and slavery to uncover her own bloody past… while a world goes to war with itself.

In the frozen kingdom of Saiduan, invaders from another realm are decimating whole cities, leaving behind nothing but ash and ruin. As the dark star of the cataclysm rises, an illegitimate ruler is tasked with holding together a country fractured by civil war, a precocious young fighter is asked to betray his family and a half-Dhai general must choose between the eradication of her father’s people or loyalty to her alien Empress.

Through tense alliances and devastating betrayal, the Dhai and their allies attempt to hold against a seemingly unstoppable force as enemy nations prepare for a coming together of worlds as old as the universe itself.

In the end, one world will rise – and many will perish.

Kameron Hurley is, of course, the award-winning author of God’s War, Infidel and Rapture. I’ve only read the first one, but it was damned good. The trilogy was published in the US by Night Shade Books, and Del Rey UK published the first book last year, and Infidel last month.

Posted by Civilian Reader at 8:48 PM